Egypt's government announced on Sunday that an Islamist has won Egypt's first competitive presidential election. The superb new documentary Words of Witness, screening at the Human Rights Watch Film Festival in New York through June 26th, sheds much needed light on how Egyptians got to this point. Directed by Mai Iskander, the film depicts the complex reality of an Egypt in which long-suffering citizens genuinely desire democracy, but must deal with the less than ideal reality of having to vote either for the Muslim Brotherhood or for remnants of the former Mubarak regime -- with the military looming over any choice they might make.

Against this backdrop, Words of Witness makes the smart decision to focus its story on a young Egyptian woman, journalist Heba Afify. The documentary follows 22-year-old Afify, a reporter for the English-language newspaper Egypt Independent, as she covers Egypt's transition to democracy -- from the heady days of the revolution in early 2011, through Egypt's chaotic year and a half under military rule, to the recent months of buildup to Egypt's first free presidential election. Completed in just the last few weeks, Words of Witness has a remarkable timeliness and immediacy in depicting the contending forces that are challenging Egypt's journey to democracy.

Like her fellow citizens, Heba Afify finds herself torn between tradition and progress. Her traditional Muslim family worries about her career and her safety, while Afify's chief concern is reporting the truth of the Egyptian revolution so that she may contribute to her nation's democratic future.

As Afify poignantly says: I can't abide by the rules of being an Egyptian girl if I want to be a good reporter." And if she can't be a good reporter, the implication is that she can't help her country, as a free press and democratic liberty go hand in hand. Afify adds, "It's hard to live under a dictatorship -- if you say the wrong thing, they will knock on your door and take you away forever.

The film documents the remarkable degree to which Afify and other young Egyptians like her are willing to buck authority in order to bring about freedom and progress. It is her faith in these ideals that leads Afify to volunteer to cover the most dangerous demonstrations, despite the fears of her family. Afify's conviction and her willingness to put her ideals on the line are what ultimately make her such a compelling protagonist.

In one extraordinary scene, Afify hears that there is a protest taking place outside the State Security headquarters. This is the home of the hated secret police who have been arresting (and reportedly torturing) thousands of pro-democracy activists. Even though it is nighttime, and reports indicate that the situation is dangerous, Afify doesn't hesitate to join the demonstration. What follows is shocking footage, shot by Afify herself, in which the demure young woman dives right into the crowd of protesters in the dark -- joining them as they break into the building. They're hoping to free political prisoners, but as they turn on the lights in the building, they discover something even more surprising: boxes of surveillance files kept by the secret police on government employees, media, public figures and countless ordinary Egyptians. A colleague hands Afify boxes of files, saying, "This happens only once in history, Heba." Afify shakes her head at the magnitude of the surveillance, commenting, "The number of files is unbelievable."

As Afify later examines the files in her office, she finds a transcript of an actress' phone call; Afify wonders why the state police felt the need to write down every word of this woman's personal phone conversation. As the film suggests, such an abuse of authority engenders a moral corrosion that is an important reason why authoritarian societies have such trouble adapting to freedom. It can take generations to overcome the cynicism, paranoia, and bad faith created by a system in which the government spends more time repressing its own people than in serving them.

Another important point made in the film is the need for religious tolerance. Afify shows concern when the unity between Muslims and Christians -- that had largely prevailed in the early days of the revolution -- breaks down in the wake of attacks on Christians. When a church is burned down in the village of Atfeeh, leading to riots in Cairo, Afify goes to the village herself to find out what has happened. When she gets to the village, she finds a curious scene -- the kind of scene that often doesn't make it into the Western media. A local Muslim leader addresses a large group of villagers, telling them that they should show support for their Christian brothers and work to have the church rebuilt. However, a large army presence watches the scene, and Afify is prevented from visiting the site of the church. Indeed, no-one is allowed to go near the church site, and the rumor ripples through the crowd that it is the State Security apparatus itself that burned the church down in order to inflame religious tensions in Egypt and justify the old regime hanging on to power.

Afify notes that there have been no religious riots in the village -- all the riots over the church burning have occurred in Cairo -- indicating that it may not have been local Muslims who burned the church, but other, perhaps governmental forces. I was told much the same thing by the co-directors of 1/2 Revolution, a documentary about the Egyptian revolution that I covered earlier this year at the Sundance Film Festival. When I raised the problem of rising anti-Christian violence to the filmmakers, they said it was being carried out not by Islamists, but by the State Security forces who were attempting to sabotage the revolution. I was skeptical of this -- until I saw much the same thing corroborated in Words of Witness. As Heba Afify says about the church attack in the film, "Every time we are united they [the old regime] do something to divide us."

In another dramatic scene, Afify interviews pro-democracy protesters camped out in Tahrir Square. They tell her that they will stay there until they win their objective, which is the creation of a constitution and the release of political prisoners. They recount that just recently the State Security forces had swept through the square and arrested 1500 people. The men complain: "Mubarak fell -- but not his regime." When angry pro-Mubarak demonstrators show up to confront them, Afify calmly tells the men not to yell, stating that all opinions will be heard if they allow each other to speak without interrupting. 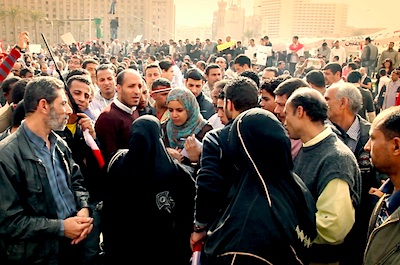 Unfortunately, things deteriorate in Tahrir Square. The army lays rolls of barbed wire around the square and news reports show hired thugs attacking the protesters with knives. A woman says the army is behind the attacks, and others cry that the army has turned on the people of Egypt. Still others tell horrifying stories of the army torturing citizens in the Egyptian Museum -- stories that were also recounted at Sundance by the directors of 1/2 Revolution. If true, this is a tragic desecration of what is otherwise a proud monument to Egyptian art and history.

Afify collects video testimonials of Egyptians describing arbitrary detention and abuse at the hands of the army. Afify's friends worry that she is risking her life by posting the videos online. Afify, however, feels that the videos represent the only way for people to realize "that the army is not a saint." Her mother says to her: "The army was our father." Afify responds: "We must learn how to be without a father."

As Egypt heads toward a referendum on democracy, Afify explains that in the past, voting was a danger because people were beaten up in polling places. She says that "this time people are very excited that their voices are going to count. ... This is a new experience for them." In one of the most moving sequences of the film, the camera shows long lines of citizens, women and men of all ages, lined up to vote. The camera lingers on their jubilant faces. For many, it is the first time they have voted in their lives. A man says to Afify "before, the outcome was predetermined," but now "we don't want to postpone democracy." Afify takes a picture of an elderly woman who proudly holds up her ink-stained thumb to show that she has voted.

Words of Witness is redolent with such images, showing that the democratic spirit is alive in a people who have otherwise been assumed not to want freedom. Even after they become disillusioned with the military and with the Muslim Brotherhood (who commit a series of blunders after being elected to parliament), Egyptians are still hopeful as they approach the 2012 presidential elections. One woman says to Afify, this is "the first time I've been free to vote without coercion." And though many seem less than thrilled with the alternatives of voting for either the Muslim Brotherhood's Mohammed Morsi or the prior regime's Ahmed Shafiq, Afify notes, "We're taking some stumbling steps, but the feeling of unity and solidarity won't go away."

Director Mai Iskander, herself of Egyptian Christian and Czech heritage, brings a strong eye for such humanistic detail to Words of Witness. When I chatted with Iskander at the film's screening at the LA Film Festival (coincidentally held on June 17th, the day of Egypt's presidential election) she explained that she was influenced by her background in narrative film, having worked on such productions as Men in Black and One True Thing. When I remarked on her powerful use of close-ups, Iskander explained that she focused on the faces of average Egyptians in the film because she "wanted to show them as human beings and not just a news story." 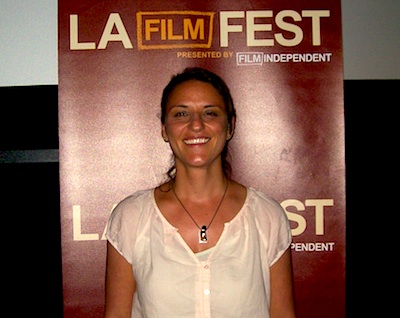 I was also impressed that Iskander directed, shot, and recorded the sound for the documentary by herself, with fellow filmmakers and the AP contributing some footage of the revolution. Iskander was literally a one-woman crew as she followed Afify through the revolution and its aftermath. The danger that Iskander and Afify put themselves in to shoot Words of Witness cannot be overstated. They are both young women, and yet they repeatedly moved through large crowds of angry men or into remote rural locations to capture the movie's dramatic footage. Given the brutal assaults and rapes carried out against women journalists in Egypt this past year, their courage is all the more remarkable.

When I asked Iskander how she had handled such dangerous situations with Afify, she responded:

"Well, Heba doesn't seem to get scared about anything, so I just followed her lead -- and then when I came home and I was editing, I realized I was being very naive to follow her lead! [Laughs.] No, she's very courageous, and I guess you just can't think about that, you know ... I was scared at some times."

As for her hopes for Egypt's future, Iskander related:

"What I hope is that people don't forget that something was born out of the revolution ... the sense that people could have this power, this taste for democracy ... I hope that doesn't get extinguished too easily."

Words of Witness is currently playing at the Human Rights Watch Film Festival through June 26th and recently screened at the LA Film Festival. Iskander hopes to show the documentary at fifty college campuses this fall through a campaign that she is currently fundraising for through Kickstarter.

As Egypt heads into an uncertain future with a new president, it seems appropriate to end with the words of Heba Afify: "People are saying that Egyptians aren't ready for democracy - but the only way we'll get ready is by practicing."