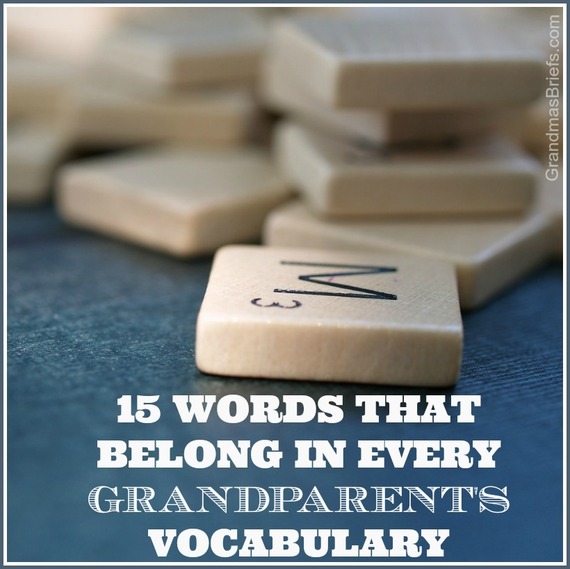 AFFLATUS — n. A sudden rush of divine or poetic inspiration. Grandchildren are the cause of many a grandparents' afflatus.

BELGARD — n. A kind or loving look. Cookies are nice but it's belgards from Grandma that kiddos crave most.

COMICONOMENCLATURIST — n. A specialist in funny names. There's no better comiconomenclaturist than a grandma on babysitting duty.

DANDLE — v. To move a small child up and down on the knees or in the arms playfully. Dandling is a grandparent's favorite form of exercise.

GRAVID — adj. Pregnant. When a daughter becomes gravid, a grandma is born.

KINDERGRAPH — n. Photograph of a child. Prepare for a deluge of kindergraphs when meeting a new grandmother.

NEPENTHE — n. Something that brings forgetfulness of sorrow and suffering. When circumstances stink, grandchildren are often the only successful nepenthe for Grandma and Grandpa.

OPTIMITY — n. The condition or fact of being best. Seeking optimity in parenting? You'll find it in grandparenting.

PANDICULATION — n. Stretching and yawning. An infant grandchild's pandiculation, with eyes and fists scrunched and rump jutted out, ranks near the top of a grandma's favorite sites to see.

SLUBBER — v. To smear or dirty something. Grandparents find it far easier to overlook a child's slubbering than Mom or Dad.

VAGITUS — n. The first cry of a newborn. Grandparents fortunate enough to hear it will never ever forget the sound of a grandchild's vagitus.

VECORDIOUS — n. Crazy, senseless, lunatic. Those without grandchildren consider grandparents vecordious... until they become one themselves and undergo a similar transformation.

WAMBLE — n. The rumble, gurgle, growl made by a distressed stomach. Beware the next diaper when an infant elicits a wamble.

ZELOTIPIA — n. Morbid or fanatical zeal; jealousy. Though it may take effort, it's best to avoid zelotipia when grandchildren enjoy time with the other grandparents.