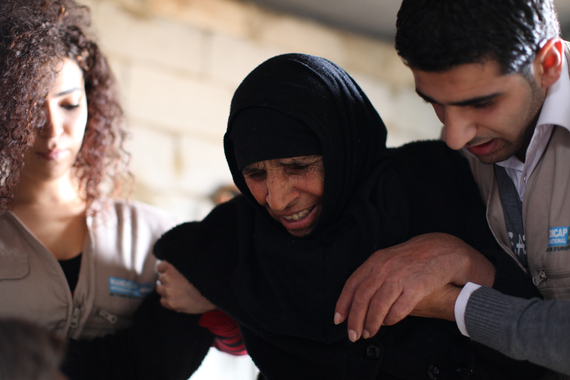 At a humanitarian impasse, we sit. We have been here at this Syrian crossroads for three years now waiting for diplomatic follow-through from the international community and growing wearier all the while. Our long-anticipated opportunity to rise to our feet and step forward, well, it came and went with failed Geneva II Peace Talks, and here we remain.

In October's United Nations Security Council (UNSC) Presidential Statement calling for unhindered humanitarian access within Syria, we found optimism. Yet, in the aftermath, the international community revealed its impotence in pressuring parties to the conflict to adopt these policy changes, drastically affecting the lives of millions of Syrians. Instead, circumstances only deteriorated and cynicism won.

We have advocated actively for diplomatic follow-through, knowing we will only be able to efficiently provide assistance when the leaders of all parties to the conflict are convincingly obliged to enforce the humanitarian principle of access to assistance for those in need. To reach vulnerable persons inside Syria, Handicap International has expended costly time and resources to sidestep the tyrannizing barriers currently in place. Still, solutions within our scope of influence are fractional and transitory at best.

Yet, on February 22, with the passing of UNSC Resolution 2139, we stood to our feet to see a light at the end of the tunnel, however faint and distant it remained. Something had to come in the wake of missed opportunities by the United Nations "High Level Group" tasked with following up on the implementation of the Presidential Statement -- their words, words, words, but drastically inadequate action taken.

Disempowered by the politicization of the humanitarian imperative and quasi-paralyzed by an unprecedented catastrophe of humanitarian inaccessibility, we have gradually lost our patience with these words. Much the same, the Syrian people are watching the clock tick, made restless by the death tolls of empty rhetoric.

But with or without patience, we have maintained hope. We know that concrete actions to facilitate humanitarian actors in reaching vulnerable Syrians are ready to be taken. Immediately, a framework for monitoring access enhancement must be developed and disseminated to all stakeholders. UNSC leaders must resolutely communicate that obligations of parties to the conflict will be closely scrutinized, and any arbitrary denial of humanitarian access will be classified as a violation of International Humanitarian Law. Good intentions are futile without effective execution.

At the same time, the acquiescence of the United Nations and its humanitarian agencies to the politicization of the interpretation of cross-border assistance remains a central and dire disgrace. A so-called legal debate has been allowed to override the imperative of humanitarian support. Throughout the crisis, the question of the legality of crossing international borders to provide aid has been flimsily debated by the international community. In disregard of sound legal evidence in support of such impartial humanitarian assistance, policy makers remain hesitant to take a stance. Consequently, cross-border interventions from neighboring countries -- representing a massive proportion of overall assistance provided by international NGOs within Syria -- are neither fully acknowledged nor supported by the current humanitarian coordination mechanism. UNSC Resolution 2139 demands prompt access "across conflict lines and across borders." Is there any legitimate room for ambiguity here? We do not think so. And yet this debate carries on. Words, and words again.

Shamefully, the United Nations Emergency Relief Fund, as well as a number of institutional donor bodies, remains open only to organizations granted registration by the Syrian Government. Such denial of support to agencies attempting to provide assistance in areas outside of the government's control can be considered a breach in the fundamental principle of impartiality established by the Geneva Conventions. The United Nation's coordination agency (UNOCHA) must heed its responsibility to dedicate all necessary resources to facilitating cross-border work, especially for actors that haven't been granted registration. In parallel, all diplomatic efforts must be undertaken by influential United Nations member nations to encourage and support host-country governments in facilitating humanitarian interventions from their soil into Syria.

Without immediately adopting a posture explicitly in support of cross-border intervention, the international community risks permanently distorting the framework of humanitarian principles. We cannot recant.

As we sit, reluctantly in waiting, we watch war rage on. Aid workers and humanitarian activities are being targeted; food and essential items and healthcare are being extorted and deflected as a tactic of warfare; and more than 250,000 people remain besieged. Bureaucratic impediments and cross-border politics assure the perpetuity of extreme gaps in coverage and inefficiencies. Well over 6.5 million internally displaced persons are watching savings deplete, living expenses skyrocket and conditions worsen across the board as their staggering vulnerabilities compound.

Together, we reserve confidence in the international community's capacity to defend human dignity, irrespective of political agendas. But the Syrian people have been waiting far too long to be shown proof.

Handicap International has been present in the Middle East since 1987. Teams have provided care for Syrian crisis-affected populations since April 2012, in Lebanon, Jordan and Syria. Emergency activities include: physical rehabilitation, psychosocial support, provision of assistive and mobility devices (including custom prosthetics and orthotics), distribution of core-relief items, cash assistance, emergency weapons risk education, inclusion and advocacy, among many other initiatives.