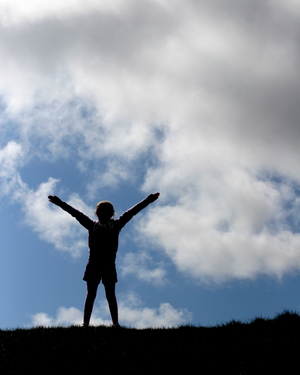 Can we truly be 'happy' at work?

Let's harken back to the days when we were children for a moment.

Do you remember the sheer joy and utter pleasure we experienced when we played? Whether outside and playing the game of hide and seek, frolicking at the community center playground, cavorting in the backyard or dancing by yourself in your bedroom ... when we were playing, we were often filled with joy. It was bliss. It was free. There was a purpose, a meaning in our play.

I had the childhood of infinite dreams. In the summer there was a creek nearby that my bicycle always seemed to find. I would spend hours catching crayfish, building dams, playing fictitious war games with friends and generally being mischievous.

In the winter, not only was there snow to contend with and ice rinks to skate on, I grew up with an indoor pool where my Sea World routines with plastic orca whales and dolphins became legendary. Book-ended by the fall and spring seasons of tree forts, leaf piles and road hockey, my upbringing was definitively one of play.

As it turns out, if we have a playful childhood--devoid of the helicopter parenting concept first put forward in 1969 by Haim Ginott in Between Parent & Teenager--we are destined to not only be happier in life but we might end up making more in wages than those who are not.

Jan-Emmanuel De Neve of University College London and Andrew Oswald of the University of Warwick studied data from over 15,000 young adults and adolescents and they came across a startling finding. They found those having a happier and playful upbringing than their less inclined counterparts were destined to earn more in salary to the tune of $2,000 per annum by the age of 29. Between the dreariest and the happiest brackets, the differential amounts to $8,000 in earnings.

Given we can't go back in time, how can we look forward?

More research comes from Gallup and Healthways who have partnered together since 2008 to interview roughly 178,000 Americans annually, asking questions and gaining perceptions on "physical and emotional health, behaviours, work environment, social and community factors, financial security, and access to necessities such as food, shelter and healthcare" to provide us with a well-being index.

In America, well-being has been stuck at roughly 65 percent of the population since 2008. It has not really moved. In other words, 35 percent of Americans do not consider themselves to be in a state of well-being or therefore "happy at work." When a third of the organization does not possess a sense of well-being at work, you can be certain these types of employees are disengaged with a purpose mindset a long journey away.

When surveying on a global basis, Gallup and Healthways found that only 18 percent of respondents are likely to be thriving in purpose well-being. The researchers define purpose as "Liking what you do each day and being motivated to achieve your goals."

Deloitte sees things in a slightly different but equally alarming perspective. While workers--at least two-thirds of them--may consider themselves as satisfied, roughly the same number believe that "businesses are not doing enough to instill in their culture a sense of purpose aimed at making a positive impact on all stakeholders."

If you stop and think about it, the various data points actually makes a lot of sense.

With only two-thirds of workers satisfied with their life at work and less than 30 percent actually engaged at work according to various studies, it's not surprising 68 percent believe their organization could be doing more for society.

Could it be that we have erased the elements of play from our childhood--as workers progress from high school to university to organized work--creating monotonous jobs or hollow work environments for employees? All the while, leaders are creating organizational structures that are hierarchical, mechanistic and territorial, coupled by a fixation on maximizing shareholder value or bureaucratic tendencies.

If, however, the purpose of the organization and its team members is aligned--and the organization is operating in an open, collaborative, fun and harmonious culture--it can potentially deliver the one-two punch of societal and organizational benefits.

If our work environments were to become more playful with respect to its culture and its purpose, perhaps that would help employees become engaged while feeling a sense of purpose in their roles as well.

Here are a few things to consider at your place of work:

In1985, the Communication Department of the University of Delaware explored patterns of humorous communication against the context of organizational culture. The research indicated humour can:

I'm not suggesting you join the circus, but start by adding a little playfulness to your team or organization's operating style. Employees not only want to have a sense of purpose in their role at work, they want to have some fun, too.