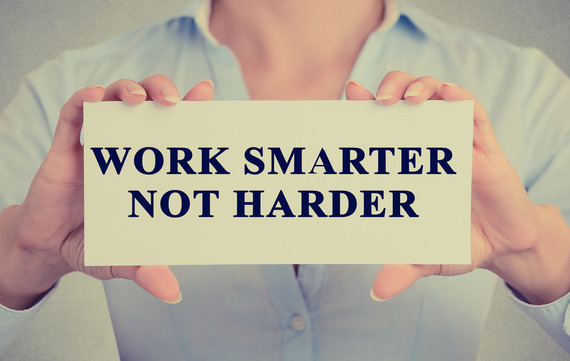 The eight-hour work day is merely a dream for most employees today, especially when it comes to running your own business. For those not on an hourly wage, it's more like 12 to 14 hours a day -- and that includes weekends! The obsession to work longer does not equate with getting more work done. Studies show that after a certain point in the workday burnout and lethargy set in, making your decisions woozy and your communications with others less than clear.

Several health organizations say that adults need between 7 and 9 hours of sleep every night, but studies show that less than 50% of the adult population in the USA get that amount.

Last year the Swedes decided that enough was too much, so they legislated a 6-hour workday. So far the results have been positive and productive.

Swedes report they are sleeping better, have a better appetite, have cut down on drinking and smoking and other so-called recreational drugs, and feel more energized at work -- thus getting more done in six hours than they ever got done in eight.

"I used to be driven to succeed until I saw what it was doing to my co-workers in Hollywood. Now I strive to thrive -- that is, to do good work, allow myself plenty of time for my personal interests and relationships, and make time to give back in quiet ways that are not for PR purposes. It's a healthier way of defining success." Tom Cruise.

It's too bad that entrepreneurs can't use the Swedish system of just working six hours a day. Nurturing a startup is like nurturing a baby -- you're on call 24/7. But still, even the most conscientious mother makes time for sleep and healthy meals and exercise. An entrepreneur must do the same -- or become less effective.

Don't work nights unless you have to

Several university studies show that employee productivity plunges dramatically after working fifty hours a week. And after fifty-five hours on the job in a week the employee becomes nearly sterile when it comes to productivity. Working overtime at night, then, is pretty much just spinning your wheels. According to CNBC, you'll be just as productive with fifty hours if you go out and play as if you kept your nose to the grindstone for an extra ten or fifteen hours. And employers are hardly ignoring the issue. Work-life balance programs are in vogue, and there are celebrated cases of executives--like Facebook's Sheryl Sandberg--being very public about their efforts to be home for dinner, notes Russell Clayton, a management professor at Saint Leo University. Many firms fail, however, because the efforts are largely symbolic, he said. "There's often a disconnect between the company mantra and the standards Supervisors are holding their employees to," he said.

More and more scientific research shows that the body works best and the brain thinks best during regular daytime hours. Too early and too late, our minds and bodies rebel against the work regimen and begin to shut down in crucial ways that can affect any business adversely.

There are no millionaires when it comes to health

Everybody starts out with about the same amount of energy and good health. If it's squandered by overwork and unrelieved stress and anxiety and starts to break down, you may be able to change course and get some of it back. But it's a gamble. You can't treat your health like a yo-yo, expecting it to bounce back up every time you let it go down.

If you're not sleeping well and your relationships are deteriorating, take a moment to check your work schedule. Just how many hours a day are you devoting to business? You may feel justified in working 14 hour days, thinking that when you've succeeded, you'll slow down. However, according to Esprit de Corps, even the best leaders can't keep that pace up for very long.

Gradually drop your work hours to something that a sane person would approve of -- even if it means having to delegate more and modifying some of your goals. You'll feel better, and - surprise! You'll probably get just as much, if not more, done as before.