Coined by German-American psychologist Herbert Freudenberger in 1974, burnout is broadly defined as "physical or mental collapse caused by overwork or stress." It’s a universal condition, but different countries around the world have seen burnout manifest itself in different ways -- from worker suicides in China and France to European employees taking sick days or even retiring early due to stress. And when it comes to burnout and its consequences, different countries have different ways of dealing with it, or not dealing with it.

Since then, some governments have taken steps to recognize and prevent burnout, while others continue to employ a more hands-off approach. One country blamed and indicted the CEO of a company known for overworking employees. Another country reduced the length of its work week. One government imposes fines on companies that don't comply with burnout prevention regulations, but without clear results. One government's labor minister launched a public awareness campaign, and one nation handles the problem by compensating the families of those who die from overwork. In some countries, the issue is left entirely to the private sector, every-company-for-itself, so corporations are free to either continue denying the problem or institute initiatives to improve employees' mental health -- often with their bottom line in mind.

Here's how a few states around the world have specifically addressed the issue -- some more effectively than others:

Germany: According to numbers compiled in 2011 by AOK, Germany's largest insurer, almost one in 10 sick days Germans took in 2010 was related to psychological illness, nine times the figure in 2004.

In response, labor minister Ursula von der Leyen began a campaign to raise awareness, targeting small- and medium-size companies (larger companies, she said, were already taking steps to address the issue). In a 2012 interview with Agence France Press, von der Leyen estimated that worker stress costs German businesses 8 to 10 billion euros ($10.5 to 13.1 billion) in annual output due to workers taking time off or retiring early because they're so run down. She said that the labor laws Germany has in place were adequate; the issue was that they weren't being enforced. "It's a trend that we have to do something about," she said, but emphasized that it was up to employers and trade unions to implement change.

France: Known for long lunches, five-week vacations and briefly implementing a 35-hour work week, the Gauls seem to have perfected a way of stress-free living that leaves ample time for rest and recreation. But they may not prioritize wellbeing as much as you'd think, at least when it comes to their corporations.

Thirty-five France Telecom employees killed themselves in 2008 and 2009, and according to Gigaom, several left notes implicating work stress in their demise. Unions accused the company's then CEO, Didier Lombard, of creating a work environment that held workers to impossibly high standards and forced managers to switch roles every three years.

In 2012, whether in response to public outcry over the France Telecom suicides or in an attempt to prevent future workplace abuse, the French government indicted Lombard.

The United Kingdom: When a UK recruiting firm conducted a survey of HR directors earlier this year, 80 percent said they were afraid of losing top employees to burnout.

That's just one study, focused on white-collar workers, but the data suggest that the policies the UK has in place to prevent and address work-related stress aren't as effective as they need to be. In a 2007 report on work-related stress, the Work Foundation, a London-based research institute, detailed the British government's efforts to combat burnout. The UK Health and Safety Executive (HSE) created management standards to educate employers about work-related stress and make sure they are complying with requirements. Employers who don't comply can face criminal charges or fines, and employees can also bring civil suits against them. However, due to an onslaught of cases, the HSE specified that workers would be awarded damages only when employees have notified their employers that they might be risk for health issues relate to work stress. Employers are only responsible for taking preventative action when a particular employee has identified himself or herself as vulnerable.

Starting in 2001, the HSE also implemented a 10-year plan called "Revitalising Health and Safety Strategy" whose goals included reducing worker stress. In a 2009 report on the initiative's progress, the HSE stated that there had been no discernible change "in the proportion of people saying their job was very or extremely stressful between 2004 and 2009."

Japan: The Japanese are so familiar with the consequences of burnout that they've built it into their vocabulary. They have a word for burnout that leads to death, "karoshi." They also have a word for suicide related to overwork, "karojisatsu." For proven cases of karoshi and karojisatsu, the government awards around $20,000 to victims' families, and employers can pay up to $1 million in damages.

The rise in compensated cases may be due to a government reassessment of what constitutes karoshi. In 2000, after the Japanese Supreme Court ruled that karoshi had caused two drivers' deaths, Japan's Ministry of Health, Labour and Welfare formed a committee to rethink the standard for recognizing karoshi as a cause of death. Previously, only overwork within a week or a day of a given death made a death qualify as karoshi. The committee concluded that if death resulted from overwork over a longer period -- 1 to 6 months -- leading up to the fatality, it was also karoshi, and compensation should be awarded. In 2007, a district court ruling expanded the definition one more time to include death related to the excessive amount of overtime work employees are reportedly expected to put in at some of Japan's largest corportations.

China: In China, the word for death by overwork is "guolaosi." Examples include factory worker suicides as well as deaths among young, white-collar strivers. In 2010, 14 workers at a Foxconn Technology factory in Wuhan, China committed suicide to protest low wages and long hours. In 2012, workers at the factory again threatened mass suicide, for the same reasons.

The epidemic of overwork in China became evident once more this year when 24-year-old Li Yuan, an employee at the Beijing offices of U.S.-based advertising firm Ogilvy & Mather died of a heart attack, after allegedly working until 11pm every night for a month. The Internet filled with rumors that Li Yuan had been worked to death. (Ogilvy denied them.) The public outcry echoed that following a case two years ago in which Pan Jie, a 25-year-old employee at PriceWaterhouseCoopers' Shanghai office, died from acute cerebral meningitis. Many attributed the death to the grueling work schedule she tweeted about from her Weibo account.

A representative for Human Rights Watch, a New York-based nonprofit, told the Washington Times in 2010 that the problem in China isn't an absence of laws protecting workers from unreasonable hours. It's that the laws don't get enforced. Other critics argue that the single most effective step the government could take to combat guolasi would be to allow all workers to form unions and negotiate for more humane schedules. China does allow employees of foreign companies to unionize, but the unions are state supervised and formed in a way that gives them very little bargaining power.

South Korea: South Koreans also have a word for death from overwork, "gwarosa." It was only in 2001 that Korea introduced the idea of a five-day work week -- theirs had been six days long before. At that time, Koreans worked 2,499 hours annually, more than workers in any other nation in the Organization for Economic Co-operation and Development (OECD), a coalition of 34 countries with market economies. In 2004, South Korea began to implement the shortened work week for companies with more than 1000 employees.

Since 2000, the average number of hours Koreans worked annually has steadily declined, but in 2008, burnout was still a problem. That year, amid an economic downturn, then president Lee Myung-bak used his inaugural address to encourage Koreans to work harder.

Latin America: In developing countries, workers are especially vulnerable to burnout because day-to-day tasks like cooking, paying bills, and local travel can be so time consuming and resource depleting. As detailed in a 2007 World Health Organization report titled "Raising Awareness of Stress at Work in Developing Countries," access to infrastructure, technology and jobs also varies widely between urban and rural communities in these countries.

According to the report, governments in these countries do pay attention to worker wellbeing, but regulations address physical rather than mental health and hazards:

Unfortunately, at present, there is no interest in regulating or developing guides for good practices focussing on ergonomics and psychosocial hazardous exposures such as high speed work, long working hours, and job insecurity in Latin American countries.

The United States: So far, no government body has publicly addressed the ubiquity of burnout in the U.S. or its toll on public health. Americans work longer hours than workers in Australia, Canada and most of western Europe, and the U.S. is the only developed nation that doesn't guarantee paid vacation. It's also the only industrialized country that doesn't guarantee paid parental leave.

CORRECTION: This story previously stated that the number of compensate karoshi cases in Japan rose "from 47 to 12" between 1997 and 2011. The number rose from 47 to 121 during that period. 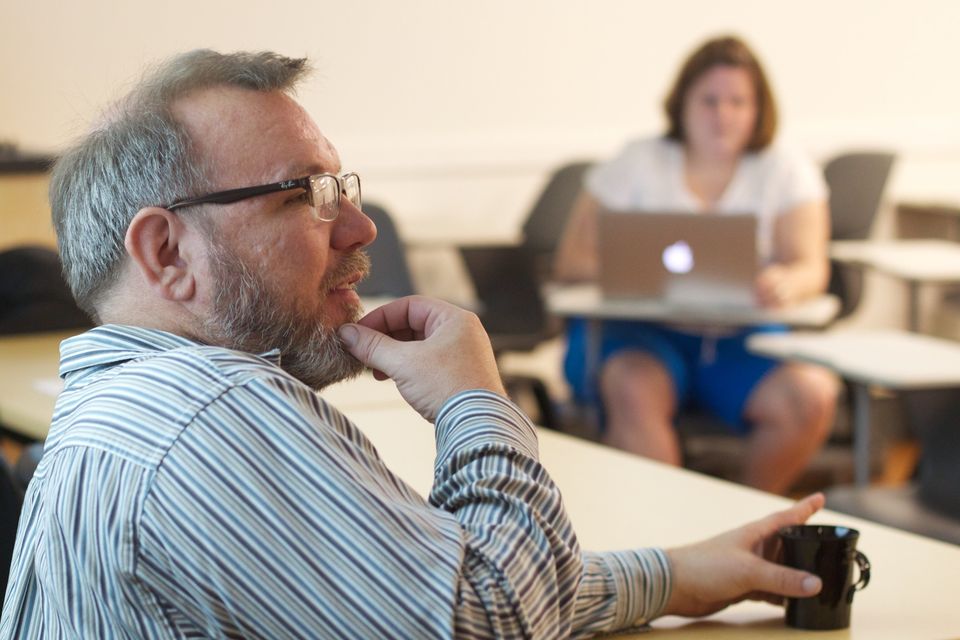 1 / 5
1. ID Your Stressors
Stressors can be internal feelings, external behaviors or external influences. <a href="http://science.howstuffworks.com/environmental/life/human-biology/how-stress-works2.htm" target="_hplink">Dr. Betty Burrows</a> notes that stressors can come in many forms, such as changes in your relationships, chemical influences such as alcohol or nicotine, noise pollution or physical deprivations including not enough sleep. Pinpoint the thing or things in your life that start to lead you down the road to no return and increase physical aliments such as headaches or sleeplessness.
<a href="http://www.flickr.com">Flickr</a>:<a href="http://www.flickr.com/photos/37996646802@N01/7213847574">cogdogblog</a>