Dissatisfied workers are less alone than they were six years ago, a new report finds.

In 2010, nearly one in three of surveyed U.S. workers, or 32 percent, said that they were seriously considering leaving their jobs. Compare that to 2005, when 23 percent expressed that level of dissatisfaction, according to the report by Mercer LLC. The report also found fewer feelings of commitment, accomplishment and pride within the workplace.

The cause of the spike in dissatisfaction, the report states, is that employees increasingly feel their career expectations are not being attained, whether in terms of benefits or advancement.

"From the employee viewpoint, not only has the deal been redefined, in many cases, the new deal is not being delivered as promised," the report said.

Wages, particularly, have been a source of disappointment, When adjusted for inflation, the average American is making $400 less than he or she was making in 1988.

But despite higher levels of dissatisfaction, few employees are willing to voluntarily leave their jobs, according to the Wall Street Journal. Blame that on the economy, as only 1.4 percent of employees voluntarily left their jobs in April, the lowest level since voluntary turnover began to be measured by the Department of Labor in 2000.

Employee satisfaction, particularly in an increasingly service-based economy, is essential for a firm's success, according to an article published in the Harvard Business Review. "Employee satisfaction," the article states, "results primarily from high-quality support services and policies that enable employees to deliver results to customers."

The below graph by Mercer compares job satisfaction by age-group: 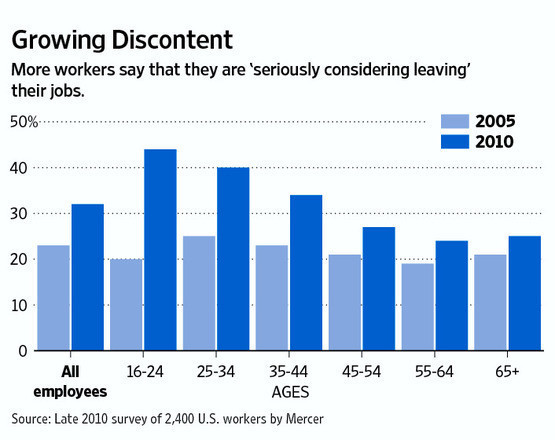