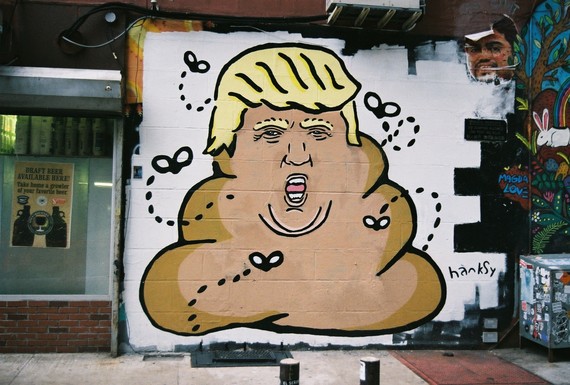 Donald Trump has tapped into a lot of the anger that fueled Bernie Sanders's unprecedented campaign for president. He rails against the Trans-Pacific Partnership and he talks about a rigged system. So we've undoubtedly got union members who are attracted to his tough-guy promises about making America great again and magically creating good jobs. But Trump doesn't have any magic.

All he has is bullshit and hypocrisy.

Trump preys on working-class Americans' anxieties about their stagnant wages and crumbling dreams and turns those anxieties into hatred of immigrants. Trump disrespects and mocks women. He conceals his tax returns and exaggerates his business achievements. He ran a rip-off private university that promised educational advancement, but delivered private enrichment to him. He thinks he's above the law, or simply doesn't understand the U.S. Constitution.

He built Trump Tower with undocumented, non-union workers who didn't get paid the minimum wage. His fancy ties are manufactured in Mexico and China. He opposes the fight for $15, and he believes in so-called "right to work."

Hillary Clinton is not a perfect candidate. She is not a populist, at a time when people are yearning for anti-establishment populists. She has not been with us on every issue in the past.

But on April 13, she walked our picket line at Verizon.

.@HillaryClinton stops by to support @Verizon workers on the picket line in NYC. #VerizonStrike #StandUp2Vz #1u pic.twitter.com/l6H9fj46yJ

She was the first Senate sponsor of legislation that eventually expanded Family Medical Leave Act (FMLA) benefits for flight attendants. She supports comprehensive immigration reform. She supports overturning Citizens United and establishing a public campaign finance system. Clinton was an original sponsor of the Employee Free Choice Act, and she supports creating a $250 billion infrastructure investment program that would create hundreds of thousands of good jobs. She comes out strongly for expanding Medicare access, and she has called for greater Wall Street accountability. She has called for expanding voting rights and ending the school-to-prison pipeline.

But it's about more than just a list of issues. Donald Trump is a mindless jerk who threatens to destroy our country. He is blustering, bigoted, Muslim and Mexican-hating, phony, born-on-third-base billionaire. He's a reality show nitwit who spends half his time in bankruptcy court, and who thinks the problems of the world can be solved by nasty name-calling and juvenile tweets. Trump makes Barry Goldwater look like Abraham Lincoln.

Hillary Clinton is a thoughtful and experienced leader with whom we have sometimes had disagreements. It's a no-brainer.

But at the same time, we will never forget that defeating Trump is not nearly enough. It is a necessary condition for transforming this country in a pro-worker direction. But it is by no means sufficient. After the polls close, we will continue building our movement to hold our new leader and the Congress accountable to an agenda that will make this country work not just for the 1 percent, but for all Americans.