Going through a haunted house is obviously a terrifying experience, but working as one of the monsters in a haunt can be scary for totally different reasons. Who knows how frightened people are going to react or what someone might do after they've had a few drinks. We asked several haunted house workers to share the craziest thing they've experienced while working on the job. Here are some of the best ones.

1. "I've gotten punched before. Usually people will jump and scream, but every once in a while you'll get someone really good and they'll instinctively take a swing at you. I'm just glad it was a small guy that only landed his wild swing into my shoulder because it would suck to get knocked out while dressed as a zombie. You can't knock out a zombie!"

2. "I had a lady complain that I was being too scary. I was walking around in a scare zone and jumped out at her. I guess I got her good because a few minutes later she walked back up with someone from customer service saying that I should be removed because I scared her too badly. The employee was nice to her, but basically told her that's the point of a haunt. Some people."

3. "One time a guy secretly brought a gorilla mask into the house and tried to jump out and start scaring people. He was either drunk or completely stupid because he would just lunge forward and yell "Me want banana!" into stranger's faces. Luckily security was quickly informed of his nonsense and escorted him out."

4. "Sooo many big, macho guys come in acting like they're not afraid of anything and then end up screaming like a little girl. I've seen so many groups of bros wearing tank tops and looking like Axe Body Spray commercials come rolling in like they're invincible and get totally owned. It's awesome."

5. "Oh man, I was working at a haunted house a few years ago and the only thing that ever bothered me was when people would brings kids through. I know most have an age minimum, but I guess ours did not because it was smaller and personally owned. You never feel good about jumping out and scaring a crying child."

6. "A creepy dude that was volunteering at the haunt (there are a lot more volunteers than you'd probably imagine) kept taking pictures of the girls working there. Not just in costume, but anytime they were walking by. I only worked the one year, but my friend went back the next year and said he was still volunteering there. Not sure if he still had his camera though."

7. "You would not believe the amount of people that we've caught trying to sneak into a corner and make out or have sex. We have cameras everywhere so obviously we see them. The best is when they get offended when you have to come over and break them up. Then I'm apologizing to them for not letting them use the maze like it's a hotel room."

8. "My best friend and I worked in a haunted house our senior year. He jumped out and scared this middle-aged guy that was walking through by himself. The guy barely reacted, but looked at my friend and said, 'Dude that was so scary. Good job.' Then he handed him half of a blunt and walked off. That guy was the coolest ever. And yes, we smoked it as soon as we were off work and it was really good stuff.

9. "If you see a sign warning you that there's a risk of seizures, it's because someone has definitely had a seizure. I've seen it happen. If strobe lights bother you, then don't go to haunted houses. It's not worth dying over."

10. "I never realized how many people literally pee their pants! I bet I've seen almost 10 people completely humiliated after going through a maze because they soaked themselves. Go to the bathroom before you do the haunt, people!"

11. "I was an evil scarecrow in a haunted corn maze a couple years ago. I jumped out and scared this couple, then a few minutes later the same couple came by again, so I scared them once again. The third time they came through the guy stops me and says, 'Look buddy, I know you're just doing your job but we can't find our way out of this damn maze and I just want to get out of here and go home.' I took off my mask and explained how to get out. I guess I just really respected his honesty."

12. "One girl pooped her pants. It was during an early shift before I had come in, but it's all we talked about for weeks. You should get a bonus for making someone actually poop her pants."

13. "A woman had just gotten broken up with and, for some reason, her friends thought it would cheer her up to walk through some haunted houses. Everyone felt bad trying to scare their group because she was sobbing and her friends kept saying things like, 'Just forget about him, sweetie. Let's just enjoy this!' They really wanted to make sure they didn't lose the money they spent on tickets, I guess." 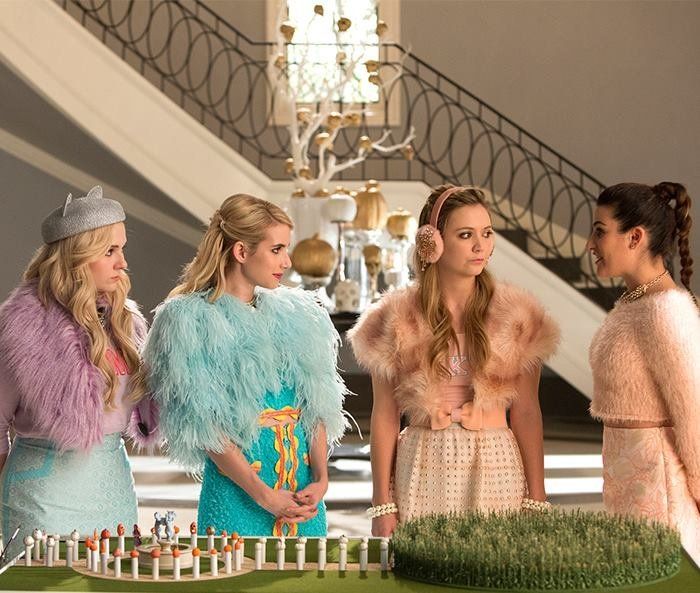 1 / 25
'Scream Queens'
The latest TV show by Ryan Murphy (the man behind "Glee", "American Horror Story" and "Nip/Tuck"), is the perfect excuse to bring your furry Chanel-like pastels and cropped sweaters. Spring colours during fall? Scary.