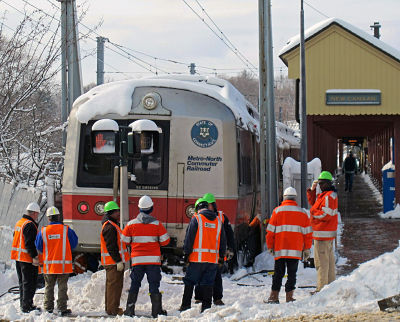 I live and work in New York City. But every weekday, the workplaces here are joined by thousands of residents of Connecticut, New Jersey--even Pennsylvania--who commute to their jobs from another state. It's like this in any metropolitan area near a state border, of course. Yet each April, at least some of those state-crossing commuters encounter a rude surprise.

The poor suckers coming in from Connecticut are one of the best examples. In 2013, our Metro-North commuter rail system, used by more than 80 million people each year, experienced three major shutdowns, two of which--a derailment and a power outage--affected Connecticut lines. And nobody needs to be reminded of the winter from hell we're still living through, with snow and icy conditions closing schools and making roads a menace. Each time disaster strikes, local politicians take to the airwaves to encourage people to skip the commute and work from home. Employers are urged to promote the concept. I have no idea how many men and women who had never worked from home suddenly found themselves doing so in the face of these events last year. But those who hail from Connecticut will, quite literally, pay a price.

I spoke recently with Nicole Goluboff, attorney, advocate and author of The Law of Telecommuting. She explained:

"If all those people did as they were instructed to do and telecommuted, they're going to discover that they're paying taxes to two states on the same income this April."

It comes down to a little-publicized glitch in the way income taxes are assessed by the states. You see, all states have the right to tax their own residents on their income, no matter where these residents happen to be when they earn it. But some states--New York included--have a regulation on the books that basically orders everyone, resident or not, to pay state income tax on every penny they earn while working for a company that's located in the state--even on days when they, themselves, are physically working somewhere else. And then there are states--Connecticut included--that require those same employees to pay state income tax for every penny they earn while physically working in their state, even if the work they are doing is for an out-of-state company.

Confused? In practical terms, this means that if hypothetical employee, Joe Goodworker, resident of Connecticut, has a job with Wayne Enterprises in New York, but works at home once or twice a week because he hates the commute, or has young children, or is even (ahem) prevented on occasion from making the commute, the money he earns on the days he works from home is subject to both New York and Connecticut income taxes.

But, you say, both Joe and his employer have agreed it makes sense for him to work from home. He's more productive and less exhausted when he doesn't have to spend hours in his car or on the train each day. In fact, a train derailed and the governor, himself, is on the radio begging Joe and his ilk to work at home today! It doesn't matter. The New York regulation (known, for no obvious reason, as a "convenience of the employer" rule) says, in effect, that unless Joe's home office meets more than a half dozen criteria--out of a list that includes such things as "The employee meets or deals with clients, patients or customers on a regular and continuous basis at the home office," and "Advertising for the employer shows the employee's home office as one of the employer's places of business"--Joe's gonna get taxed twice.

It's Happening All Over

The case of Connecticut and New York are particularly extreme, but they are not unique. The sound you might hear right about now, as tax season gears up, is the clashing of conflicting state income tax laws around the country--and the frustrated howls of innocent victims on both the employer and employee side. To pick on poor Joe just a bit longer, let's consider a couple more scenarios.

Say Joe moves to another state--one which, unlike Connecticut, will not require him to pay taxes even on days he works from home, because it recognizes he's already being taxed by New York for those days. Excellent, right? No more double taxation! Well, yes, that's true. But if New York's income taxes are higher than those of his home state, than he's paying higher taxes than his neighbor who doesn't commute out of state. He could be working from home nearly every day, being protected by the local fire and police departments, and yet be paying higher taxes to make these services available somewhere else. Finally, say Joe is thinking about retiring to Florida, and decides he'd like to head down there a few years in advance to make sure it's the right move. He's a great worker, our Joe, and the folks at Wayne Enterprises are happy to let him work remotely, as long as he returns to New York for the occasional meeting. He calculates what he'll need to live on--taking into account that Florida has no state income tax--and buys a house.

Surprise! As Goluboff eloquently puts it, he's about to find out "he's packed his New York state liability in his bags and moved it with him to Florida." He'll be taxed on 100 percent of his income in New York, even if he's now earning 90 percent of it in a no-tax state.

"Convenience Rule" is a Total Misnomer

It's about nobody's convenience. Even employers' interests are ignored. Trying to cut back on office space? That's not enough. Have a great candidate who won't take the job unless she can work from home? Too bad. Need an employee to be able to focus on a particularly sensitive task? Tough. In fact, asked to name a case in which the insanely strict contingencies of the convenience rule were satisfied, the one Goluboff comes up with dates from the late 70s, when a court agreed with an employee that his job required him to work offsite. His job? Testing "specialty items" for a publishing company--like horses, sports cars and firearms.

Is your head swirling yet? Mine, too. As a longtime advocate of the "anytime, anywhere" workplace, I had no idea of the financial penalties many telecommuters face.

There is a Way Out of This Mess

It's called the Multi-State Worker Tax Fairness Act (H.R. 4085) and it was introduced in the House just last week by Congressman Jim Himes, with co-sponsors Rosa DeLauro and Elizabeth Etsy. (All three are Democrats from Connecticut.) In essence it says that states may not tax income earned by non-residents when those non-residents aren't physically present in the state.

While it's great that this bill has been introduced, be aware that it isn't the first time such a thing has been tried. A similar bill, the "Telecommuter Tax Fairness Act," has been introduced into every Congress since 2004--and gone down to the obscurity of committee every time. If you don't want that to happen to this one, call your representative and tell her or him to support H.R. 4085--or better yet, sign on as a co-sponsor. While you're at it, call your senators and suggest they introduce the bill in the Senate, too.

Finally, take a look at this Letter of Support. This is a new letter, created in response to the legislation introduced last week, but similar letters have already been signed by groups ranging from the American Legion to the Christopher and Dana Reeve Foundation. If you know of an organization that might want to sign on to the new letter, drop Nicole Goluboff a line and let her know.

Oh, and spread the word. I'll bet your friends and co-workers didn't know about this, either.

Robin Hardman is a writer and work-life expert who works with companies to put together the best possible "great place to work" competition entries and creates compelling, easy-to-read benefits, HR, diversity and general-topic employee communications.