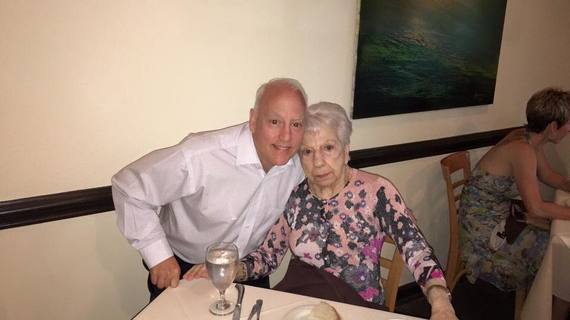 My mom just passed away at 94. She was in the hospital for two weeks. She had a small bowel obstruction. Had she not had emergency surgery, where they removed two feet of dead intestine, she would have died. Mom was a fighter. Who else could have a screw put in her neck at age 88 and leave the operating room and go to her regular room without even a stop in ICU! As it turned out, she could not handle her rehabilitation this time around and died in hospice a couple of weeks later.

What a contrast in care between the hospital and residential hospice.

Don't get me wrong. Her hospital care was excellent in terms of patient experience, an empathetic staff, a pleasing environment. And while the clinical care was equally good, it was provided in silos.

This story illustrates it in a nutshell.

The surgeon came out of the operation and declared it a success because mechanically it was as they took out a dead section of her intestines and stitched her back together.

When the anesthesiologist came out afterwards, he let us know we almost lost her in surgery, how they had to pump so much oxygen into her to make it through and that her recovery would be rough.

In the step down unit, the gastrointestinal surgeon came in and looked at her and pronounced her ready to go. Upon which the nurse said, you do know she had a heart attack two days ago. Upon which he reacted "oh"!

My mom received care in a major healthcare system. Yet not everyone was working from the same script.

A healthcare system that operates in a silo even when it is connected by medical records, huddles and other innovations still fails to consider the whole patient. And if a family member is not there to advocate, well things can turn bad very quickly.

As two weeks dragged by in the hospital it became clear that mom was both incapable and unwilling to try to rehabilitate herself. In her mind it was indeed time to go and be with my sister and father. So while I initially was "shopping" for rehab and then assisted living, it became clear that she needed hospice.

I have written about hospice before with my father-in-law's in-hospital hospice experience. In short, there is a singleness of purpose in hospice care, everyone is on the same page, and every single person, staff and volunteer, are there to make sure every need of the patient and the family caregivers are met. My mom's passing was truly a death with dignity.

We only spent 55 hours in hospice but every second was precious.

Sure some could argue that hospice care is not as complex as hospital care. Still, the singleness of purpose and focus by hospice is something other healthcare providers need to emulate. Fifty-five hours of hospice care made such a positive impression on my wife and I that 625 hours of hospital care could not even touch. And it showed in our word of mouth and our wishes. We told everyone about her incredible hospice care and directed donations be made to hospice in lieu of flowers.

The experience after all is the marketing.