Cindy Westbrook has a funny story she likes to tell about new parenthood. She thinks it perfectly sums up those first few sleep-deprived weeks at home with a new baby.

One night, in the middle of the night, her husband went in to change their baby’s diaper. He removed the dirty one, but because he was so tired and out of it, he never put on a clean diaper. The results were comically awful, of course. When it was Cindy’s turn to feed and change the baby, it was Pee-mageddon. The baby, the sheets, the crib -- all soaked. “It was the first, but not the last, time I had to clean pee out of the hair of a child in the middle of the night,” she told HuffPost recently over email.

When Westbrook, a working mother in West Virginia whose kids are now 7 and 4, tells her story, people usually laugh and commiserate -- we’ve all been parental zombies doing crazy stuff at 2 a.m. But sometimes the reaction isn’t quite so funny. Sometimes someone pipes up to defend her husband, saying something like, “Well at least he got up with her.”

Cindy thinks, Wait, what? Of course he got up with her. “Why is it expected that the mom will get up with the baby at night, and it’s just a nice surprise when the dad does it?” she asks.

The attitude underlines a lingering, under-discussed issue in the fraught world of parenting -- the wide difference between what’s expected of mothers and fathers. Let’s call it the “expectation gap": Even though men are doing more of the parenting and household chores than ever before, the cultural expectation that women do all the traditional stuff hasn’t really budged.

So, women feel like they are struggling to meet society’s expectations for what a mother does -- work, plus volunteer at school, cook the meals, clean the house, send the thank-you notes, take the kids to the doctor, and on and on. Men, meanwhile, are often applauded for “pitching in.” Ever hear a father say he’s “babysitting” his kids? Westbrook says her husband is treated “like a rock star” each year when he bakes a cake for the school bake sale.

In fact, men who ask for more flexible work arrangements to take care of family are perceived more favorably than women who make similar requests, according to a recent study from a sociology professor at Furman University.

That gulf in what’s expected of moms and dads is making the work-family juggle feel a lot harder for women. A recent HuffPost/YouGov poll surveyed parents working more than 20 hours a week to see how they were handling their roles at home and at work. 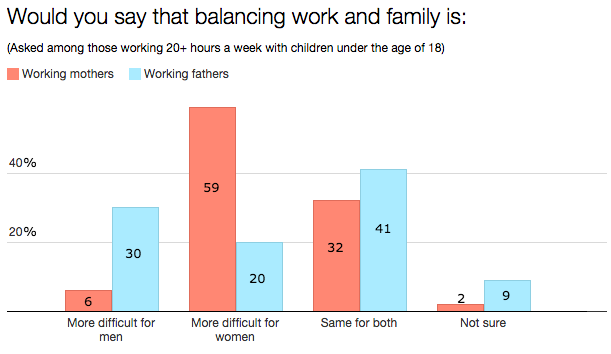 The results are surprising because, in many ways, working mothers in dual-income households have it better than ever, particularly at home. Men are increasingly picking up their fair share of the work. Fathers now spend three times as much time with their kids as they did in 1965, according to a recent study from Pew. Their time doing household chores has doubled over that period, as well. Mothers, meanwhile, now spend less time on household chores than they used to, the research shows.

I heard from several fathers who say they’re doing a lot of the chores and the parenting. I know many, many working fathers that do their fair share. These guys are also starting to feel the strain in balancing work and home. More fathers in dual-income households reported tension between work and family responsibilities than mothers did, according to the latest Economic Report of The President, a big grab-bag of economic data released by the White House each year.

Still, there’s this big disconnect. Women feel like they have a much harder time balancing work and home life.

It comes back to the expectation gap, says Rebecca Livingston, who studies gender and diversity in organizations at Cornell University. “It’s harder for women to balance work and family because the expectations are different,” she says.

Although women are now expected to work more outside of the home, the demands made of them at home haven’t changed much.

The cultural understanding that women have the primary responsibility for child- and home-care is so deeply ingrained we hardly notice it. Recently, the New York Times profiled on its front page a woman who works six 12-hour days every week as a nurse, while her husband takes on fewer hours as a pipe fitter. The article noted the novelty of their arrangement, pointing out that the husband picks up the kids from school, gives them dinner, and dresses them for bed. (Unsaid: “Wow!”)

The article takes care to note that their household is a bit unkempt -- because of the wife’s grueling work schedule:

The house is usually messy. The bathroom walls are covered with scribbles from bath crayons; dirty clothes pile up. Ms. Waugh often jams six 12-hour shifts into one week, leaving little time for cleaning and laundry. Mr. Waugh mows the lawn and will run the vacuum cleaner now and then, and if there are no clean towels, Ms. Waugh will do a load of laundry. Otherwise, housework waits until she has a stretch of days off.

Why does the housework wait for this woman, who clearly is stretched to the limit? The Times doesn’t get into it, but one assumes it’s because she’s the one expected to do that work.

“If you go to someone’s house and it’s a wreck, you’ll judge the woman,” says Livingston.

We teach women they can do everything men can do, but society has been slower on the flip-side: We haven’t taught -- or expected -- that men do everything women do.

Couples need to talk to each other about what they expect their roles to be. A recent study of 25,000 graduates of Harvard Business School turned up an expectation gap in how men and women viewed their careers. A majority of men expected their career would take priority over their partner’s, and their expectations were met. Women thought their careers would rank equally with their partner's -- but that's not how things turned out. Many of those women reported being dissatisfied with their career trajectory. Meanwhile, both men and women said they expected the woman would handle most of the child-care.

Livingston says society has been slower to adjust to the new normal, where both parents work and share responsibility for tasks once confined to mothers. Part of the solution, she says, lies in communication between parents over what's expected at home. Few couples hash out the details -- and resulting resentments aren't so funny.

The HuffPost/YouGov poll consisted of 2,000 completed interviews, including 280 interviews of those working 20 or more hours a week who had children under the age of 18. The poll was conducted Feb. 8-17 among U.S. adults using a sample selected from YouGov's opt-in online panel to match the demographics and other characteristics of the adult U.S. population.