As the President takes the podium for the State of the Union, the majority of people watching and listening to his speech will be almost certainly be worse off financially than they were when he took office. That's not allocating blame, just stating a fact. According to the Pew Research Center, in the first two years following the Great Recession, 93 percent of Americans lost net worth. Only 7 percent got wealthier. Forty-three percent of those sampled in a nationally-weighted survey I recently commissioned believe this is a permanent trend. 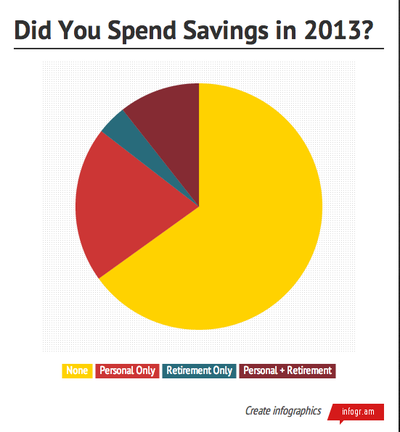 Using the online platform Survey Monkey, I ran the 2500-respondent query as part of an ongoing book project charting how America's workers are faring, and what qualities allow people to succeed despite the daunting state of the job market. Among the sobering findings were that nearly 35% of respondents said they had spent retirement or personal savings to supplement their wages. Twenty percent relied only on personal savings; four percent on retirement savings, like an early withdrawal from an IRA or 401k, and eleven percent spent both. According to an analysis of data from the Federal Reserve and the U.S. Census Bureau by the firm Hello Wallet, in 2010, one in four Americans withdrew money from their retirement accounts. And the Transamerica Center For Retirement Studies found a third of un- or under-employed workers made early withdrawals.

Even more arresting: 21 percent of those I surveyed agreed with the statement "In 2013, I borrowed money from friends or family specifically in order to pay household, medical or credit card bills."

All of this adds up to some painful math: Americans, faced with stagnant wages despite pronounced gains in productivity, are spending against their future in order to live today. Here are some of the scenarios we'll see play out in the coming years:

America is a consumer economy, with up to 70 percent of GDP generated by spending and purchases. In 1955, the ratio of household debt to disposable income was 49 percent. By 2010, it had grown to 112 percent. In pushing to re-up the lapsed Emergency Unemployment Compensation program, affecting long-term unemployed, President Obama made two arguments -- a moral "there but for the grace of God go I" plea, and a statement that money to the unemployed was immediately spent, not saved, thus aiding local businesses. Those politicians and analysts who disagree say that Americans must be willing to take lower paying jobs or relocate in order to find opportunity. That approach may work in some cases (though people who have already spent down their savings have little funds to relocate), but the case remains that jobless Americans and workers in transition cannot bolster a consumer economy.

Job retraining is essential for many people seeking new employment. For those who return to college to reboot their career and incur educational debt, that debt (unlike credit cards) cannot be dissolved by bankruptcy. That means that some senior citizens are already finding their Social Security checks garnished to pay back educational institutions. If Social Security garnishing becomes widespread, you can bet the government may find itself having to negotiate a solution -- perhaps taking on the student loan defaults (and incurring more government debt) in order to protect seniors. In addition, as I have found during my reporting, many people are too proud to declare bankruptcy even in dire circumstances. Many spend down their retirement savings while looking for work, leaving themselves in a possible bind for their latter years.

Twelve percent of the respondents agreed "I work multiple part-time jobs, but would prefer to work one full-time job." With the advent of the (still contentious) Affordable Care Act, people who don't have employer-provided insurance, Medicare or Medicaid can generally find healthcare. The cost and quality vary based on location. Part-time jobs generally offer far fewer benefits than full-time work, not only health insurance but retirement plans and greater job security. Working multiple part-time jobs also often requires additional outlays for costs like transportation, and financial savvy to account for fluctuations in income.

Only 34 percent of people surveyed agree with the statement: "I believe I will have enough income (from savings, pension, or other sources) to live on comfortably during retirement." Yet Americans are still a resilient bunch. Half of Americans believe their peak earning years lie ahead of them. Half also say that they work not just for money, but for enjoyment or creativity. One question that lies ahead for America -- for the President, the Congress, business leaders and citizens -- is how to harness the creativity of the American workforce, and provide the tools eager citizens need to succeed in a volatile labor market.

Host, One with Farai

More:
Bankruptcy PoliticsState of the UnionSavingsobama state of the union 2014
Trending