Part 2 of a Three-Part Series

Can you imagine telling Bruce Springsteen that since he's 64, it's time to stop playing music? Or forcing 65-year-old fashion powerhouse Anna Wintour to retire? Should Warren Buffet leave investing to younger folks, since, after all, he is 83? And that Rolling Stones tour that just started -- with an average age over 70, maybe those guys should just let it go already? Not likely!

"Not working: that was for my parents' generation. I can't imagine doing nothing for 30 years. Nor could I afford to." That's a direct quote from one of our focus group participants who took part in our national study of 7,000 pre-retirees and retirees, Work in Retirement: Myths and Motivation. As I shared in part 1 of this three-part series, this comment represents the growing sentiments of a new generation of working retirees who are redrawing the retirement roadmap to include work, albeit in new and innovative ways. (You can download the entire study report here.)

When we think of an entrepreneur, many of us imagine a 20-something tech pioneer. However, the largest number of successful entrepreneurs today are actually people in their 50s and 60s. What our study revealed was that today, millions of people now see retirement as a chance to try something new and even pursue career dreams they were unable to explore during their core career. And thanks to a lifetime of experience and perhaps increased emotional intelligence, we're seeing an explosion in the number of people who are successfully venturing out on their own in their retirement careers.

Nearly three out of five (58%) working retirees said retirement was an opportunity to transition to a different line of work. The top reasons they moved to a new line of work were not financial, but for a more fulfilling career, specifically to have more flexibility, more fun, and less stress.

In fact, working retirees are now three times more likely than pre-retirees to be entrepreneurs. We have labeled this growing segment of workers "retire-preneurs." They told us that the top reason they start their own business is to work "on their own terms." As one focus group participant pointed out, "When you look at people inspired in their later life to work, you realize it is because it's their passion. They don't consider what they do just a job, but their life."

Is Money the Key Reason People Work in Retirement?

Although income from work certainly plays an important role in maintaining financial security in retirement, the nonfinancial benefits of working in retirement may be even greater. The vast majority of current working retirees--80%--said they work because they want to, rather than because they have to. In particular, while pre-retirees imagined money and stimulation would likely be of equal importance to them in their retirement careers, working retirees were twice as likely to report that "staying mentally active" was the most important reason to work. 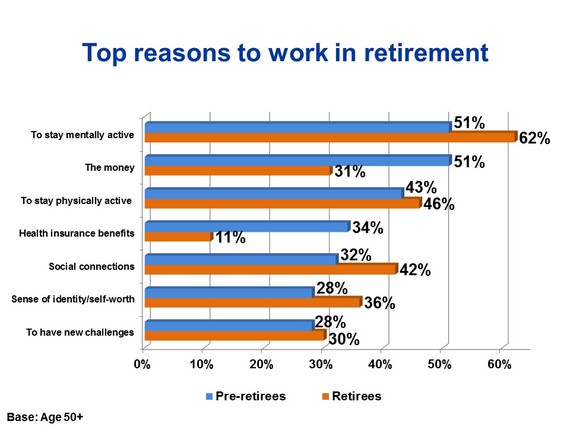 Regardless of your core motivation to work in retirement, it is clear that one of the biggest benefits of doing so is that it provides a practical solution to the financial challenges of living longer. As David Tyrie, Managing Director, Retirement & Personal Wealth Solutions at Bank of America Merrill Lynch points out, "This research clearly shows that a growing number of people find the gift of a 20- or 30-year retirement filled with only leisure may be impractical. Many will need the additional income for financial security and to make their money last, while others simply want to work and are balancing this life priority among several others in retirement."

The Four Types of Working Retirees

Of course, not all working retirees have the same work/life priorities, ambitions, and reasons for working, so in our study, we went beyond all previous investigations to identify distinct groupings or segments of working retirees. Specifically, we set out to investigate the different and distinct motivations for working in retirement. We were fascinated to discover that while everyone is a blend of multiple motivations, there seems to be four core profiles of today's working retirees: 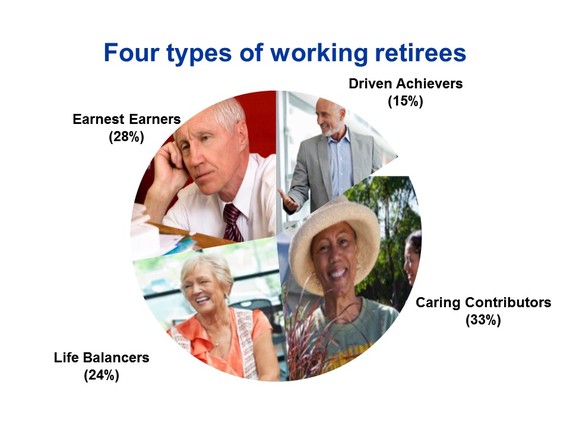 Driven achievers represent about 15% of working retirees, with the majority being men (61%). The data suggest that these individuals have most likely always felt driven to achieve. They not only enjoy work, but they derive much of their identity from work. It should come as no surprise that they tend to be workaholics and have little interest in slowing down.

One focus group participant summed it up like this: "I feel like I'm at the top of my game. I have so much more I want to achieve, I can't even imagine retiring." Overwhelmingly, driven achievers voice this sentiment. They see working in retirement as an opportunity to leverage a lifetime of experience and mastery of talents. A vast majority--84 %--say they feel very satisfied with work. Members of this group demonstrate a high level of retire-preneurship, with 39% of them owning their own business or being self-employed.

Caring contributors represent 33% of working retirees, with a slightly higher number of women than men (53% women, 47% men). They are primarily motivated to work in retirement for the opportunity to give back to society, their communities, and worthy causes. "I've spent my life working to get ahead, make a good living, and help support my family. I've always been involved in helping at-risk youth, but now that my own kids are grown, I can really roll up my sleeves and commit myself to making a difference," reflected one focus group participant.

For many caring contributors, doing work that is meaningful is its own reward, and they are far less motivated by money and status. They often work for a nonprofit, and more than a quarter are unpaid volunteers. Overall, 75% say they feel highly satisfied with work.

About a quarter of working retirees are life-balancers, an equal number of men and women, who seek job opportunities that provide the chance for workplace friendships and social connections. While ongoing income surely comes in handy, they are not primarily motivated to make a lot of money, be the top of their field, or change the world. They like the work experience and particularly relish the friendships and connections that it offers.

Of the four segments, this is the group that definitely seeks more work/life balance. They feel that they've already paid their dues, and that retirement is their time to relax and enjoy life. As one focus group participant explained, "I work because I choose to. But the good news is that now that I'm working in retirement, I don't let the work dominate my life like it used to." With 67% of life balancers saying they feel high levels of work satisfaction, they seek work that offers more fun and less stress.

We labeled the fourth and final group the earnest earners. They represent 28% of working retirees, and are more likely to be women. This is the group that works not so much because they want to, but because they have to. Of all the segments overall, they like working the least and resent having to work during their retirement. They need money to pay the bills, and are often disappointed with the way things have turned out. As one focus group participant said, "I feel like I've gotten a raw deal. Retirement was supposed to be about having fun and leisure time."

These earnest earners are often unhappy and unsatisfied at work, and many of them regret that they didn't plan better and save more. Although some take a short career intermission, they are usually pressured to return to work for financial reasons. They are the least financially prepared for retirement, and they seek guidance on how best to claim Social Security benefits as well as how to calculate the impact of continued work on their financial security. This is the second largest category of working retirees, and I worry that it's likely to grow in the future, as some aging baby boomers who haven't saved enough for retirement find themselves working longer than they expected.

Stay tuned. In the third and final blog in this series (posting tomorrow), I will cover more insights from this landmark study, zeroing in on seven practical steps to charting a course to a retirement career.