You'd think things would be different when you're in some I.M. Pei building, surrounded by educated, smart people in suits. But, it's not. Office bathrooms, and trading floor bathrooms in particular, too often look like some Hackney pub loo on a bank holiday weekend.

This list has been compiled many times before. But trust me, it's worth saying again and in a way that's never quite been said before. I'll assume a modicum of intelligence and civility by skipping things like "wash your hands" or "don't make a mess" and just focus on what you need to know:

1. Don't spend more time building the nest than you spend sitting on it.

2. Don't wear shoes memorable enough to be recognized under a bathroom stall.

4. Don't provide colleagues with any details of your experience (i.e. "I just created a Pollock on porcelain masterpiece").

5. Don't wait for someone to open the door for you or bother using a hand towel on the knob. Grow up. If you shake hands, ride in cabs, or eat in restaurants, this won't make a difference.

6. Don't take a newspaper with you. No, guys, you are not exempt; this applies to all 56 genders. There's a reason why smartphones are so unsanitary.

7. No long conversations at the urinal (a simple "Hey man" or nod is acceptable). And, absolutely no talking between stalls.

8. Don't announce your trips beforehand. I can't help but time you, and I really don't want to. My Cosmograph Daytona isn't just for looks; it's got a stopwatch.

9. The only thing worse than seeing a legible ID badge at someone's ankles is watching it scrape against the putrid tiles below the bowl. It begs the question, "What other bad choices are you making?"

10. No loitering. Get in and out as efficiently as possible; you never know what you'll encounter. I once saw what I can only presume was a four-legged man in stall at a gas station on I-95.

11. Avoid the last stall; studies have shown it to be the most unsanitary because people incorrectly assume it to be the least trafficked. The same is true with the handicapped-only toilets, but that's for other reasons (lonely nights working late).

12. If there's a nice hotel nearby, take a walk. Then grab a coffee on your way back, just to let your stomach know who's boss.

13. Don't talk on the phone. If I'm on the other end and I hear an echo, any weird noises, or even a sloppy attempt at muting, I'm hanging up.

14. If you toss your tie over your shoulder at the urinal, either your tie is too long or your d*ck is too short.

15. Don't flush with your foot. All you're doing is transferring urine and fecal matter from the floor to the handle. Do you not trust your own ability to wash your hands?

16. They're not movie theater seats. I don't care how entertaining this timeline is, handle your business and get out. (Hiding interns get a pass on this.)

17. No laughing at (or acknowledging) the strange noises. And, no jokes. We've all heard "How do blind people know when to stop wiping?" before.

18. No pulling rank. In the bathroom, everyone is equal, including your boss' boss.

19. Don't spit gum into the urinal. The guy who has to pick that out with his hands took two buses and a 5 a.m. train to get here, and he still manages to smile when he says hello.

John LeFevre is the creator of the @GSElevator Twitter feed and the author of the soon-to-be-released Straight To Hell: True Tales of Deviance, Debauchery, and Billion-Dollar Deals. 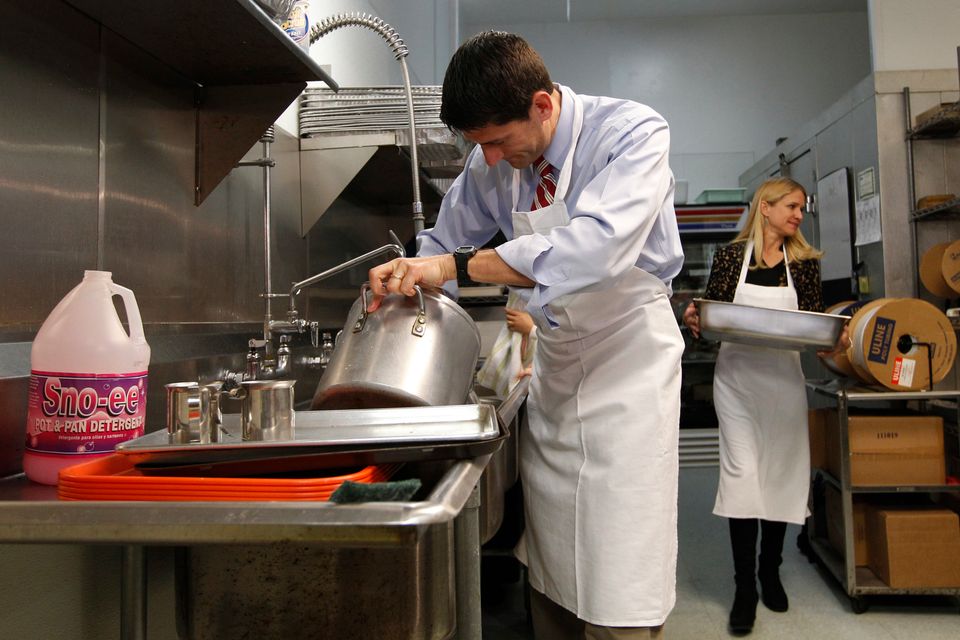 1 / 3
Republican vice presidential candidate Paul Ryan and his wife Janna wash pots at the dining hall at St. Vincent DePaul on Saturday, according to the Associated Press.
AP