Discriminating against your employees can cost you.

Workplace discrimination against employees based on race, gender or sexual orientation costs businesses an estimated $64 billion annually, a recent report from the Center For American Progress finds. The businesses incur costs in a variety of ways, including through the turnover of about 2 million employees who leave their jobs due to discrimination.

Litigation related to workplace discrimination also costs employers a signifcant sum. Just this week, FedEx paid $3 million to settle claims that it discriminated against job applicants based on race and gender in 15 states.

But it's discrimination based on gender identity and orientation that is likely the most widespread. More than 40 percent of gay employees reported facing harassment and discrimination at work, according to a recent survey by the Gay and Lesbian Task Force, cited by the Center for American Progress. Meanwhile, 90 percent of transgender individuals said they faced the same kind of abuse at the office, with nearly half of those polled saying their gender identity had a negative affect on their professional lives because they faced discrimination.

Most Fortune 500 companies have nondiscrimination policies, but when it comes to federal law, few states have legislation in place to ensure employees' work status isn't affected by their sexual orientation or identity, according to the Center for American Progress. Legislation that would put such safeguards in place is currently pending.

See the infographic below for a breakdown of workplace discrimination in America. This material, “The Costly Business of Discrimination," was published by the Center for American Progress: 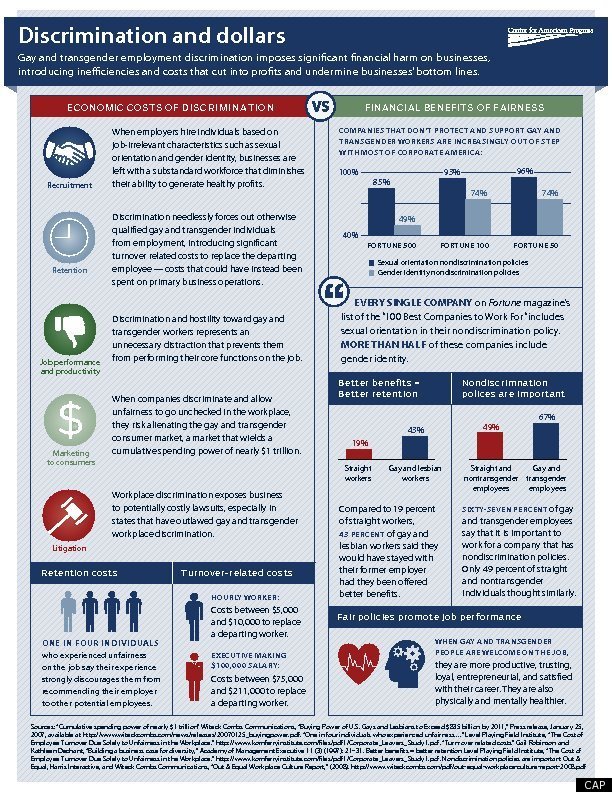