A report out this week from the World Bank Group examined some of the challenges facing women around the world and uncovered some unequivocally devastating finds. As shown in the map below, a significant share of women, especially in Africa and South Asia, have experienced physical or sexual violence from an intimate partner during their lifetime. 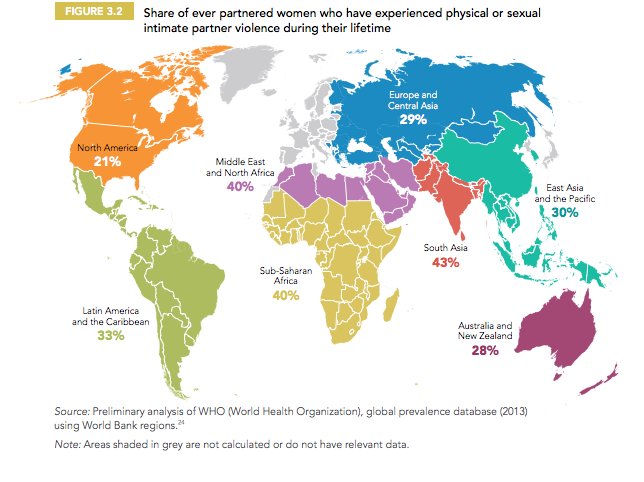 But, as the report explains, high rates of intimate partner violence (abbreviated IPV in the report) -- defined as “all acts of physical, sexual, psychological or economic violence that occur within the family or domestic unit or between former or current spouses” -- not only have an impact on individuals and families, but also affect countries’ economies.

Estimates of the costs of violence against women are so high that a lower percentage of some countries' Gross Domestic Product is spent on primary education than on domestic violence costs. According to the report, the costs of intimate partner violence are driven up by factors like lost income and productivity, health care and police services.

The graph below shows the cost of intimate partner violence in a few countries, although the report notes that estimates across countries are not directly comparable, due to the varying measures used to account for these costs.

But, if there’s any silver lining in the report, it’s that education can be a powerful tool. While the report shows that not nearly enough women receive a proper education in many parts of the world, when they do, it generally has positively impacted their lives. The graphs below show two examples. 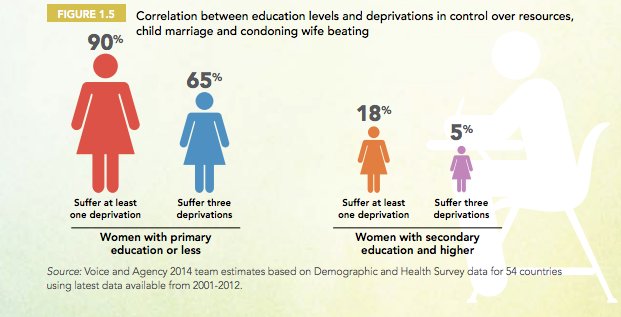 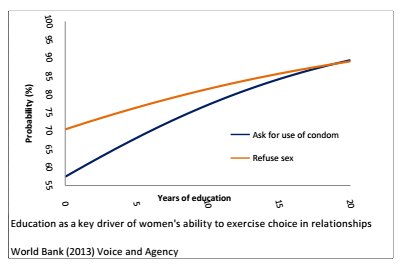 The report is especially timely amid the search for over 250 kidnapped Nigerian schoolgirls, who were abducted in April by an Islamist militant group.

“The tragedy which is unfolding in Nigeria I think underlines the urgency of the agenda,” World Bank Group Gender and Development Director Jeni Klugman told NPR of the report. “The issues we’re dealing with in this report are about the denial of choice -- girls who are unable to go to school, girls who are unable to make choices about whether and how many children to have. … I think bringing together the evidence from around the world about the gravity of these challenges and also what can be done I think makes it very timely as well as new.”