European Civil Society Organizations staged a protest in front of the World Bank Group office in Brussels on Thursday to protest the weakening of environmental and social safeguards by the institution. Despite over two years of input from civil society, project-affected communities, and experts on a wide range of social and environmental issues, a new draft of World Bank policies reveals a significant weakening of those standards.

Chanting "President Kim, keep your promises", protesters from environment, development and human rights NGOs joined trade unionists in what's expected to be the first in a wave of global protests expressing anger and a sense of betrayal. Banners asked why the President of the Bank, Jim Yong Kim, had broken his repeated promises not to dilute the Safeguards. Protesters wore 'Jim Kim' masks with long noses, comparing him with the fictional character from children books, Pinocchio. 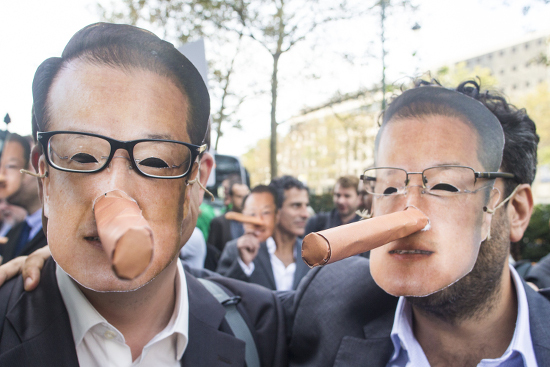 Despite Kim's repeated assurances, the draft reveals major dilutions such as gutting requirements that potential negative environmental and social impacts of a project be assessed and made public before the World Bank's board approves project loans. The elimination of clear, predictable rules also appears to be an attempt by the Bank to avoid accountability for the negative impacts of projects that it funds.

Protesters strongly object to the proposed changes because they result in standards that fall well short of the rules needed to protect the environment and respect the rights of affected communities, workers and indigenous peoples. This major dilution of existing Bank safeguards derogates from well-established international standards and would effectively dismantle 30 years of hard fought-for policy evolution, setting a dangerous precedent among national, regional and global actors and undermining momentum for the upward harmonization of international standards and alignment with human rights norms. 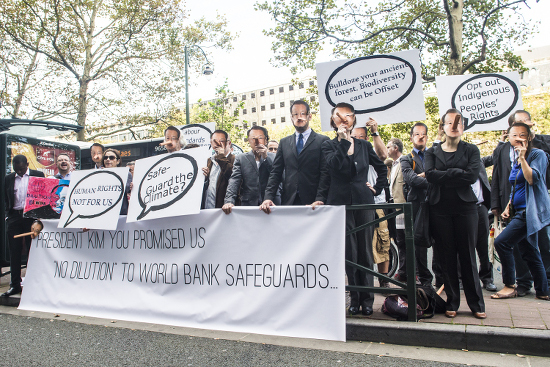 Protesters held 'speech bubbles' parodying the Bank's message to developing country governments: that human rights and labor standards don't matter, indigenous rights can be 'opted out' of, and climate change safeguards disregarded. Bank staff agreed to meet protesters to hear their concerns, and accepted a 'Kim mask' and statement of demands from European groups. 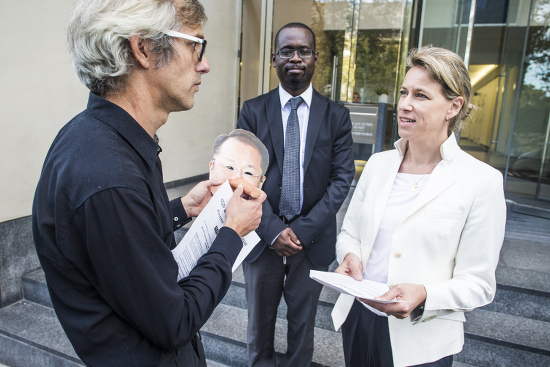 By eliminating key protections at a time when it has announced its intentions to expand lending to riskier infrastructure, large dams and mega-project schemes, the Bank fails to recognize that strong safeguards are essential to ensure that project benefits are fairly shared and that the development burden does not fall disproportionately upon the impoverished and marginalized sectors of society. Weakening the safeguards would harm the Bank's efforts to achieve its goals of ending extreme poverty and promoting shared prosperity.

The protest in Brussels is the first of its kind after the publication of the new draft of Bank policies and will be followed by similar actions in many capitals around the world in the coming weeks. 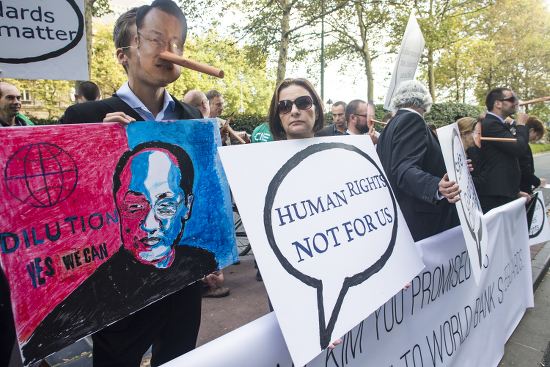 The Board of Directors of the Bank did not approve the new draft due to dissatisfaction among some constituencies on the weak language, lack of an implementation plan that is supposed to accompany the new set of rules and concerns of the CSOs. Yet, they approved the draft to go out for consultations for different stakeholders. The World Bank has yet to announce a definite consultations plan, while claiming it will be finalized by the end of the year. CSOs on the other hand have called on the Bank to scrap the draft completely and begin a new process that truly reflects inputs from affected people and civil society.