A young woman is jumping up and down in front of the New York Public Library wearing a sandwich sign that says, "Hate Reading? Talk To Me!" She's waving around several copies of "The Glass Castle" by Jeannette Walls, eager to get them off her hands.

Men and women in suits breeze by, but some passersby are curious about the spectacle. If you were roaming the streets of New York City or London last night you may have encountered a similar scene: Zealous readers handing out award-winning novels by the boxful.

Last night was the second annual World Book Night, an event for which authors, booksellers, librarians, publishers and simply passionate literary fiends gave away 500,000 free memoirs, novels and non-fiction titles in the United States and 1 million in the United Kingdom, where it all began last year.

According to the organization's site, April 23 was chosen because it's both the anniversary of Miguel Cervantes' death and Shakespeare's birth. The books are free because World Book Night is a nonprofit organization supported by American Booksellers Association, Barnes & Noble, the American Library Association, the Association of American Publishers, Ingram Book Distributors and a slew of book publishers and authors themselves, who, according to USA Today, waived their royalties. However, World Book Night is not supported by Amazon, who was not asked to participate due to the event's focus on physical books and physical spaces.

The Washington Post describes other innovative givers: "A church in Denver [gave] copies of Ann Patchett’s “Bel Canto” to a nearby magnet school for refugees and immigrants. Vernon Legakis, a surfer in Santa Cruz, Calif., [sealed] copies of Patti Smith’s “Just Kids” inside Ziplocs and hand them out at Monterey Bay. Attendees of a “Hunger Games” screening at Windsor Theatre in Hampton, Iowa, [received] editions of Collins’s million-selling novel."

The 10 young donators in Bryant Park last night were all members of the publishing community: HarperCollins, Simon & Schuster and Penguin were among the companies represented. Anne Zaccardelli, the girl with the "Hate Reading?" sign, is a Special Sales Representative at Oxford University Press. She chose to hand out "The Glass Castle" because it "puts everything in perspective."

"I think we, as a society, obsess so much about the safety of children, but don’t realize that there are so many brave children enduring truly difficult childhoods," Zaccardelli says.

Although they're perched on the steps of the New York Public Library, these canvassers are initially met with apprehension. "You mean I can have this book for free?" a young girl asks when handed a copy of Jody Picoult's "My Sister's Keeper." A more garrulous boy -- a young college student -- tells the donators that he never owns books, only borrows and shares. He walks away grinning with copies of Juno Diaz's "A Brief, Wondrous Life of Oscar Wao" and Marilynne Robinson's "Housekeeping," vowing to pass them on to others when he's through. 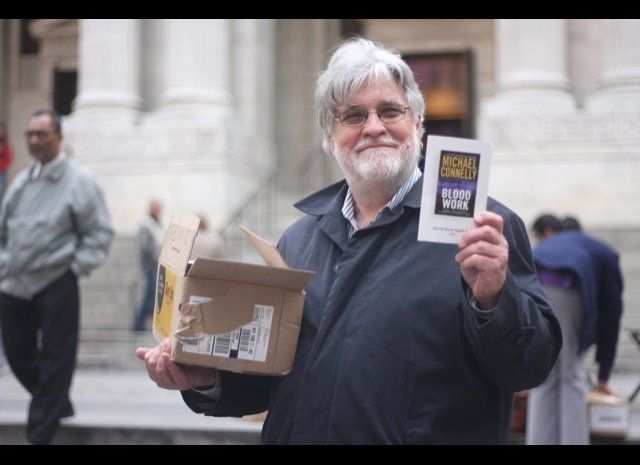