Soon the United States Congress will vote to approve or disapprove the Joint Comprehensive Plan of Action (JCPOA), the nuclear agreement that the six major countries of the world (United States, United Kingdom, France, Russia, China, and Germany) have concluded with Iran. The JCPOA limits Iran's capability to construct nuclear weapons and it also lifts the United Nations economic sanctions against Iran. For years, economic sanctions have limited the Iranian people in exercising international freedoms and enjoying material comforts available to others. Except very few countries, notably Israel, most nations of the world welcome the agreement that permits Iran to participate in the development of world civilization toward peace, prosperity, and cultural diversity.

Iran is one of the oldest continuous civilizations of the world, at par with Greece, India, and China. Iran was the homeland of Zarathustra, the founder of a religion that set in motion key dialectics of theology, including the concept of sin, prophecy, human nature, good and evil, God and Satan. (In the 19th century, Nietzsche reintroduced Zarathustra to Germans, proclaiming Gott is tot.). The Hebrew Bible and the New Testament cannot be fully understood without grasping the contemporaneous ideologies of Iran. The Hebrew Bible mentions Cyrus the Great (600-530 BC), the Iranian emperor, as "the anointed one" because the emperor allowed the Jews to build the temple in Jerusalem. Over the centuries, Iran has been a significant conduit in transporting ideas and products from India and China to the Middle East, Mediterranean countries, Central Asia, and Europe. Islamic civilization received its finesse and sophistication from Iranian thinkers and jurists, including Ibn Sina (Avicenna)(980-1037), and Al-Ghazali (1058-1111). The Ottomans and the Mughals composed their fanciful empires on Iranian aesthetic and linguistic (Farsi) sensibilities.

The contributions of Iran to the world literature and poetry are without parallel. Jalal ad Din Rumi (1207-1273) was a Sufi bard who wrote immortal verses -- that create beauty and ecstasy translated in any language. Truly meta-lingual poetry! While American politicians are speaking daggers against Iran, sophisticated Americans are enjoying the verses of Rumi, including the unforgettable verse: Beyond our ideas of right-doing and wrong-doing/ there is a field. I'll meet you there. The world's longest epic, Shahnameh, was written by Abu'l Qasim Ferdowsi (935-1025), an Iranian poet. Shota Rustaveli (d. 1216), who wrote the Georgian national epic The Knight in the Panther's Skin, borrowed heavily from Ferdowsi. The Victorian poetry during the British Empire is imperfect without Edward Fitzgerald's Omar Khayyam's Rubaiyat. The greatest poet of British India, Sir Muhammad Iqbal, wrote in Farsi before switching to Urdu. 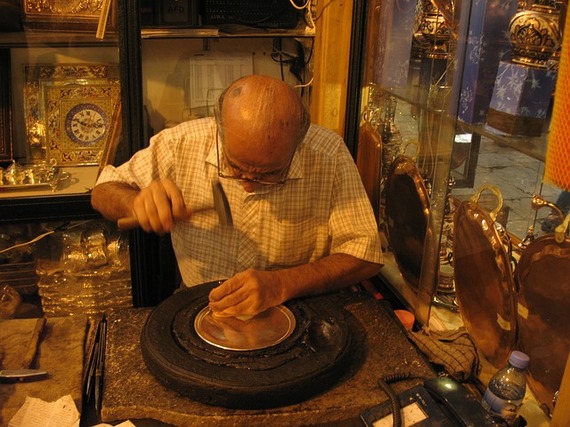 An Iranian artisan at work (Pixabay).

Part of Iran's problems with the world began with the 1979 Islamic revolution that overthrew kingdom and established a constitutional theocracy. Though flawed, the Iranian democracy is much better than many political systems in the Middle East. In most Middle Eastern countries, a single family has monopolized state power. If it is not a family monopoly, it is the military that rubbishes representative form of government. The people of the Middle East yearn for governments that can be removed peacefully. Iran does that on a regular basis. The Arab Spring toppled dictators in Tunisia, Egypt, Libya, and Yemen. However, as anarchy followed in these nations, the people have been denied, once again, to actualize political liberty.

Iranian democracy is both stable and limited. However, no single family rules Iran. Persons of moderate means can be elected as Presidents. In years to come, as Iran participates more fully in the world civilization, the Iranian political system will likely allow more political liberty to non-theocratic candidates. I have argued elsewhere that God has given freedom to Satan to mislead. When states take away the Satan's freedom to mislead, they end up creating black markets of sin. Let the individual struggle with Satan, as is God's plan. A more vibrant democracy, under which good and evil compete freely, is fully compatible with the teachings of Islam. Iran needs to bring its democracy in line with God's plan revealed in the Qur'an.

A Plea to U.S. Congress

Many U.S. representatives and Senators are voicing opposition to the JCPOA. The rhetoric is irresponsible and ill-informed. Some voice opposition because they don't like President Obama. Some oppose the agreement to show open support for Prime Minister Netanyahu, a misguided leader who attempted to pit Congress against the White House. Some wish to win favor with the Gulf States, particularly Saudi Arabia, perceived to be at ideological war with Iran. Some simply prefer anti-Islamic demagoguery.

I respectfully plead that Congress debate the agreement in a balanced and historically-informed manner. Iran is a sophisticated country. The Iranians are a creative people who have lot to offer in the fields of literature, arts, religion, medicine, architecture, and commerce. A fully-engaged Iran with the world, much like a fully-engaged India, China, or Greece, will enrich our world civilization. Iran has lived through centuries with vibrancy and imagination. Iran knows its way through hard times and good times. By voting down the agreement, Congress will lose its credibility as a serious legislative body of a major world power. President Obama will most certainly veto, as he should, any legislation that undoes the agreement. Time has come to recognize that Iran cannot be prevented from contributing to the world civilization.