If it was reported that 50,000 kids in Mexico were at the brink of the biggest intervention the Mexican government has ever undertaken to turn around hopelessness, despair, addiction and enslavement to a culture of drugs amongst youth -- would that make a compelling headline? Would it perhaps get even a fraction of clicks as dramatic pronouncements from Donald Trump vowing to build a wall along the southern border of Mexico?

If I brought your attention to the fact that this under-reported intervention in Mexico responsible for saving precious lives is a unique program combining holistic techniques including breathwork -- would that grab any eyeballs? Would a media driven culture with an insatiable appetite for the negative or macabre, pause in consideration if a program using breathwork turned around thousands of young lives quagmired in hopelessness?

What would 50,000 Mexican youth have in common with over 30 million people around the world? And why are 3.5 million people coming together to honor and create a culture of peace? The common factor is truly common, but one seldom considered - the BREATH. In 155 countries over 30 million people have experienced the life changing workshops teaching programs that involves breathwork, yoga and wisdom.

The Art of Living Foundation has taught these programs for 35 years and will be celebrating its humanitarian endeavors with a World Culture Festival in New Delhi, India, March 11-13, 2016. Its founder Sri Sri Ravi Shankar, talking about the upcoming World Culture Festival, where 3.5 million people are expected to attend a first of its kind event, said,"Congregation of good people is enough to convey that negativity can be defeated." Sri Sri's message is simple: "Love and wisdom can prevail over hatred and violence." This message is not just a slogan, but through the AOLF programs it has been translated into action all around the world.

Creating a Culture of Peace in Mexico

Bill Herman, a senior teacher with the Art of Living Foundation, and International Director Y.E.S for Schools Program, International Association of Human Values, has taught these programs successfully to thousands of kids and educators around the United States and South America. Last year this Chicago based Y.E.S ( Youth Empowerment Seminar) teacher spent his summer in Mexico, bringing Y.E.S to 46 schools in the cities of Ecatepec, Metepec and Nezahualcoyotl, where 3078 young people benefited from the program. According to him the Y.E.S for Schools provides schools with a modality of restorative practices through customized programs for youth and adults. "Our unique whole-body approach to stress and social emotional learning combines transformative physiological practices, including breathing techniques and meditation, in concert with cognitive tools and awareness."

Herman, who has taught these programs in Brazil, the Dominican Republic and in the United States in New Jersey, Chicago and Palo Alto to name a few, says that, "to create a culture of peace through the schools in the largest cities in the state of Mexico was a moving and empowering experience."

For the spring of 2016 in Mexico, the Minister of Education, is organizing a Teacher Training program for 200 of their own school counselors, psychologists, social workers to become Y.E.S teachers to officially bring Y.E.S to 50,000 students, parents and teachers in the next year. Israel Cerrillo, a school director said, "To have a program that helps them control their emotions, to see life from a different perspective, they will begin to be promoters for peace."

Viviana Jimenez, Director of Family Network, Values for Harmonious Schools Program, Ministry of Education, Mexico, says, "It is a subtle energy that spreads in the school, and when students are in that energy, their thoughts and actions change. In the quality of this harmonious environment, education for peace, happens spontaneously."

Creating a Culture of Peace in Schools with Varying Challenges

A High School in Palo Alto, one of the most affluent communities in the United States, is recognized not just for the exceptional students it produces, but an exceptionally high rate of suicides among High Schools in the US - causing it to be termed a "suicide cluster" school -- has turned to the same breathing techniques to help students facing a pressure cooker environment. The Principal Denise Herrmann, in addressing mental health issues at the school, cited the Y.E.S program in helping to teach kids positive coping techniques. 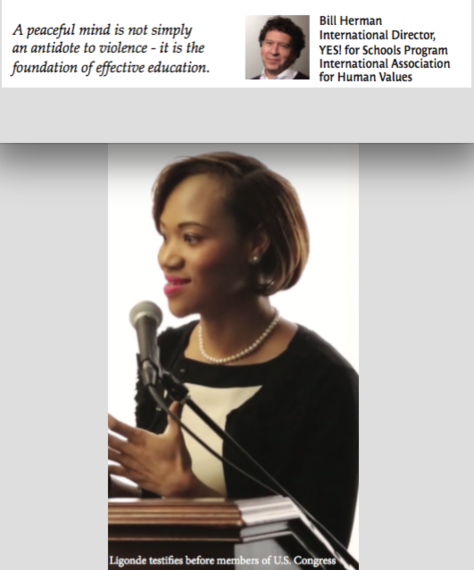 Johane Ligondé, is the principal of the J. W. Dodd Middle School in Freeport, New York, a large suburban district with a diverse population. Over a two year period, the school measured qualitative and quantitative changes in student performance and engagement by employing the YES program in its school. She believes that employing the YES program was transformative in cultivating a culture of peace in the school. She pointed out that, "Peace is not an external state of affairs but the internal condition of each student, teacher, administrator and parent. This awareness cultivates peace in the self with the potential of creating a culture of peace in our families, schools, communities, nation, and world."

In Chicago, this ripple effect of a culture of peace as a result of a dedicated Y.E.S teacher, Emily Lifton, being situated at this south side school on a regular basis for over four years, encouraged students to engage with their academic and social environment in a responsive manner. Despite neighborhood socio economic challenges, student dropout rates reduced significantly at the Instituto del Progreso Latino, in Chicago.

None of these efforts at addressing mental health make headlines, while we wonder what if these same students were entrapped in a carnage marked by gun violence, sadly occurring in schools all too often lately; episodes in different forms that have peppered the country leaving in their aftermath fear, helplessness and a terror that media coverage widely amplifies.

Creating a Culture of Peace One Breath at a Time.

What will 50,000 Mexican kids who will be taught the Y.E.S program have in common with 30 million people around the world? A program of breathwork that has proven its ability to reduce stress and anxiety and inculcate peace and happiness. Ironically, as a society we have buffered ourselves to react only to overt violence, not to acts of peace. This predicates that a new culture be engendered. One where the rally for peace is as vociferous as the cacophony of violence; where the media plays the role of an enabler and as an opinion maker of peace -- to practice solutions-oriented journalism. This unique opportunity presents itself at the World Culture Festival.

If one said that a bridge of breaths, connecting almost 30 million people who practice these breathing techniques around the world, anchoring them together in peace, is the foundation of the World Culture Festival, it would not be an exaggeration. Palo Alto to Chicago and Mexico to India -- a noise for peace is rising, culminating in the largest group meditation anywhere in the world at the World Culture Festival -- a gathering of humanity to honor peace -- one breath at a time.

This post is part of a blog series produced by The Huffington Post in partnership with the Art of Living Foundation for the World Culture Festival. The goal of the series is to present thought leadership, opinions and solutions from leaders of multidisciplinary sectors of business, politics, arts, culture, music and religion who are assembling in India for the World Culture Festival, along with 3.5 million people, to celebrate humanity and promote peace, harmony and harmonious co-existence. The effort is also part of The Huffington Post's "What's Working" solutions-oriented journalism initiative.

Shalini Parekh is a journalist and freelance writer living in the Chicago area, with an interest in issues of identity and culture, particularly with regard to the Indian diaspora in the US. She is adjunct faculty at Columbia College Chicago in the journalism department. She contributes to a blog for the Times of India and also freelances as a broadcast journalist for Times Now, the television news network based in India.