The big World Cup concert is Thursday in Soweto, South Africa. Stars like the Black Eyed Peas, Shakira, John Legend and Alicia Keys performed, some of whom are photographed below.

Keys recently announced she is pregnant with her first child and is sporting a visible bump.

Below the photos is an AP article on the concert. 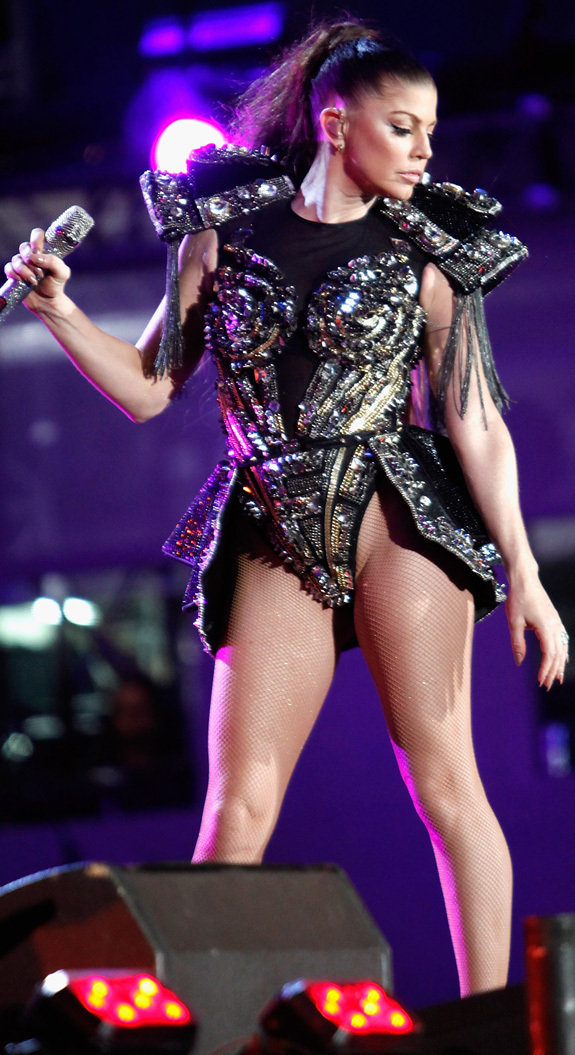 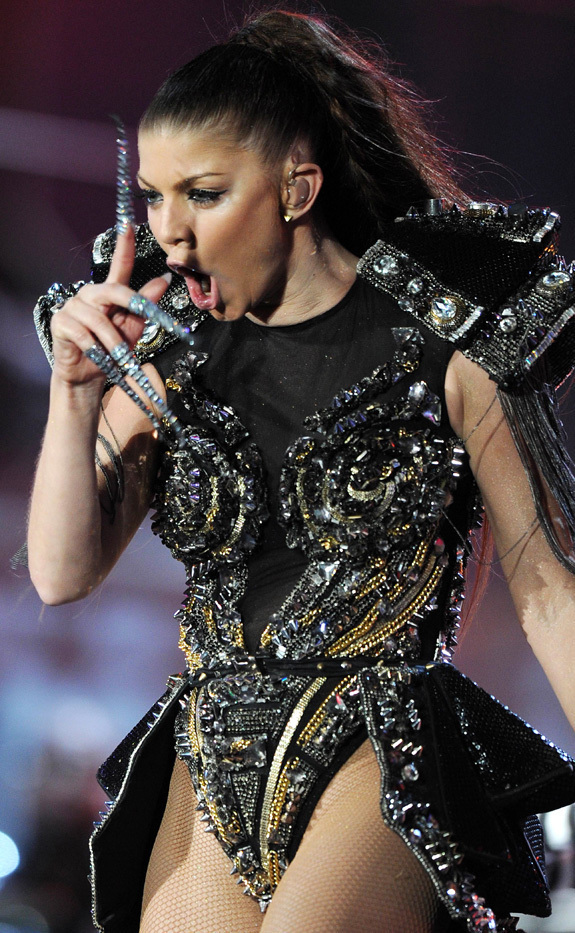 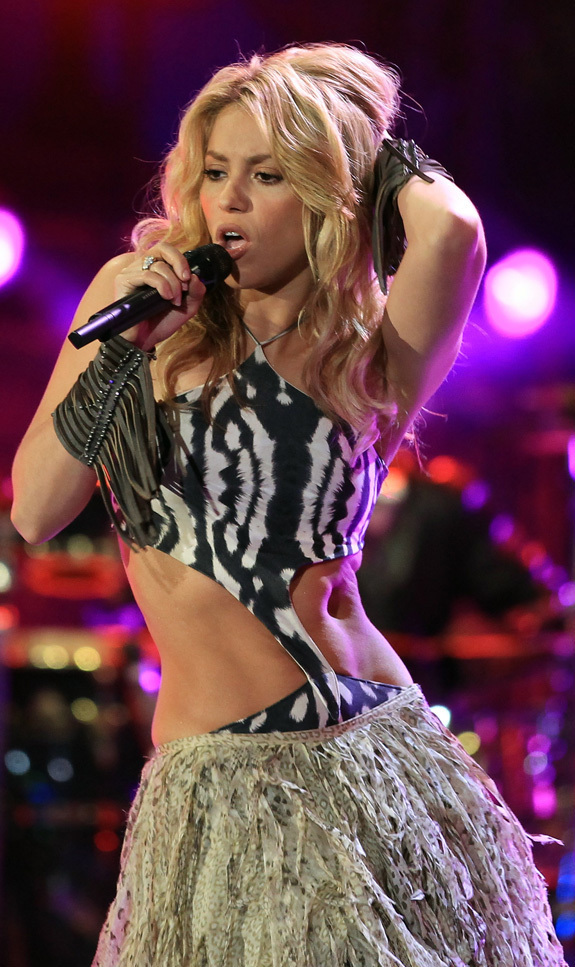 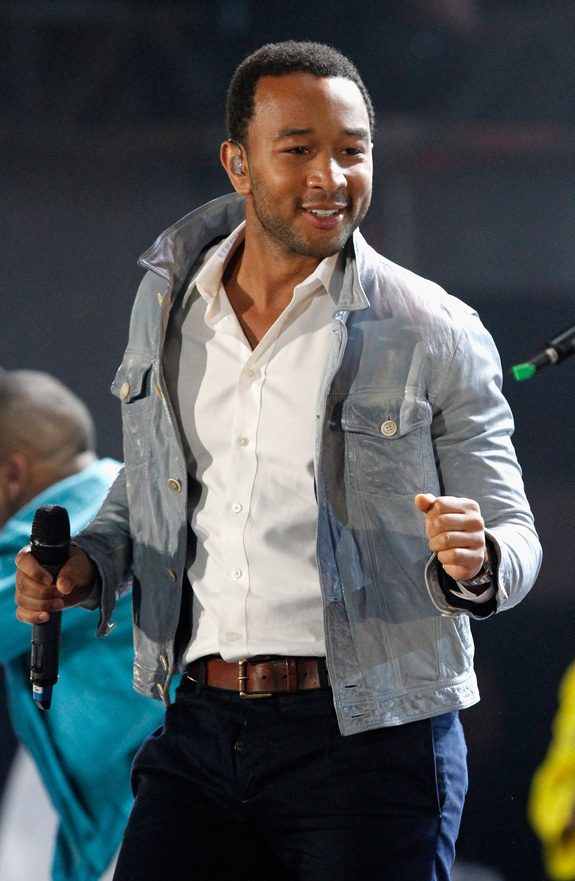 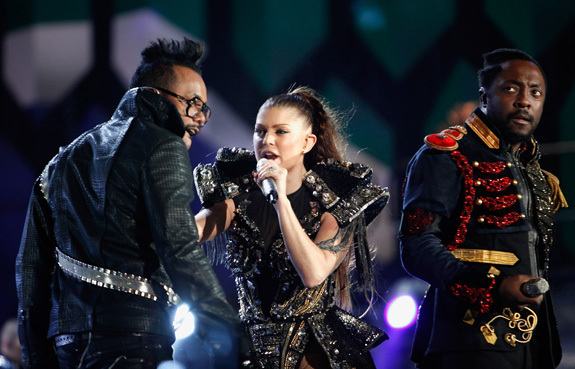 JOHANNESBURG — The world came to Soweto on Thursday for a celebration of soccer, music and unity on the eve of Africa's first World Cup, with a concert featuring international headliners Shakira, the Black Eyed Peas and Alicia Keys.

Warm-up acts played for hours before the internationally televised portion of the concert at Orlando Stadium began at 8 p.m. with a frenzy of flag waving, drumming and African-inspired dancing.

Veteran South African trumpeter Hugh Masekela took the stage with "Grazin' in the Grass" a No. 1 international hit in 1968. He was quickly joined by a new South African star, Lira, who covered the late Miriam Makeba's "Pata Pata", another worldwide hit that originated in South Africa.

The Black Eyed Peas were next with a slick medley of their hits, then it was back to Africa, with the blind duo Amadou & Mariam of Mali and their sinuous, driving sound.

Shakira, wearing an animal print, waka waka-ed – the anthem and dance of the World Cup. The turbaned Tinariwen brought the sounds of Mali's desert nomads to the mix. The crowd swayed to Keys, and did the toyi-toyi – the protest dance of the apartheid era – to hometown favorites BLK JKS. Colombian rocker Juanes, in a multicolored warm-up jacket, debuted his newest single, "Yerbatero" to cheers from the crowd.

No multistarred stadium show would be complete without everyone on stage for a rousing, closing anthem. Thursday, it was Sly and the Family Stone's "Everyday People," punctuated by fireworks.

An exuberant Archbishop Desmond Tutu, in full South African green-and-yellow fan regalia, was treated like a rock star as he led the crowd in cheers for Nelson Mandela, who is credited with sealing South Africa's bid to host the World Cup.

Tutu also acknowledged the fans from around the world who have come to South Africa for soccer's premier event.

About a third of the seats at Soweto's 40,000-seat Orlando stadium were blocked off for the stage and backstage. Most of what was left were filled, as was a dance floor on the pitch.

The monthlong tournament the concert celebrates begins Friday at the main Soccer City stadium just outside Soweto, with host South Africa taking on Mexico. Organizers called the concert and the first game triumphs after years of questions about whether a world class event could be staged in a nation saddled with poverty and crime and still riven by the legacy of apartheid.

"This is a showcase," concertgoer Nana Masithela said as she entered Orlando on Thursday. "We are showcasing ourselves, to say, 'Blacks can do it!' "

Sepp Blatter, head of soccer's world governing body FIFA, had pushed to bring the World Cup to Africa. He made a brief appearance during the concert to speak about 1GOAL, a campaign to improve education in impoverished countries. South African President Jacob Zuma, who took the stage with Blatter, thanked South Africans for the welcome they have given World Cup fans, and called on them "to show the warmness for the whole duration of the tournament."

Orlando, the venue for Thursday's concert, got a three-year, $43 million renovation as part of a nationwide building spree in preparation for the World Cup.

South Africans of all races filled Orlando, parading in the yellow and green of their national team, or draping themselves in their flag. Soccer fans from other countries also sported their colors.

Concertgoer Tumi Mohafa said the mix of races in the renovated stadium in an area where blacks once were confined is a sign of how far South Africa has come from apartheid, which ended in 1994.