Fans around the globe are counting down the days to June 12 to see their favorite teams perform at the World Cup in Brazil. But Brazilians have been coming out in the thousands to protest the high cost of the event -- billions of dollars that will be taken out of public funds.

Brazilians say the money should be used instead to improve education, health care and public services, as well as to put an end to corruption in the government and police force. They criticize the government for allowing hundreds to be displaced from their homes because of new construction or higher rents in areas surrounding the new stadiums.

Brazil's Ministry of Tourism has said that the tournament -- the most expensive in history -- is worth the cost and will generate an estimated $25 billion in revenue for the country in the long run. But many Brazilians are focusing on the exorbitant price tag as well as the huge revenue the games will bring in from broadcasters and sponsors for the international soccer organization, FIFA.

The World Cup is no stranger to controversy -- host nations in the past, as well as those chosen for future games, have faced everything from protests and strikes to reports that workers are being treated like slaves. 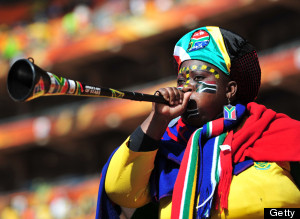 A South African fan blows a vuvuzela during the opening ceremony of the 2010 FIFA World Cup in South Africa on June 11, 2010, in Johannesburg. (Clive Mason/Getty Images)

In 2010, the World Cup headed to South Africa, marking the first time the tournament was held in Africa.

For months before the games started, people protested spending so much money on them at a time when the country was facing massive problems. Residents complained that while billions were being spent on new stadiums, houses surrounding the fields lacked water and electricity, and nearly one-in-four South Africans was unemployed. Transportation workers went on strike right before the games to obtain higher wages, and labor unions threatened to strike during the tournament because of high electricity prices.

As The Wall Street Journal documented at the time, the scenes outside the stadium in Soweto, where the opening match was played, exemplified the discrepancy between the grandeur of the tournament and the lives of so many living in its shadows.

Undulating over Soweto's hills in southern Johannesburg are oceans of corrugated metal shacks. In these settlements, roads are dirt, toilets are outdoors and electricity is pilfered from traffic lights. Incensed citizen groups have protested the lack of public services, turning Soweto and other townships into hotbeds of unrest once again.

Authorities were also accused of disbanding neighborhoods near stadiums and evicting its residents, forcing them to find shelter elsewhere or in newly established camps. Amnesty International warned at the time that informal housing was being taken down without giving residents enough notice or providing alternative housing or compensation. The organization also accused security forces of harassing informal traders, homeless people and migrants living in temporary shelters. 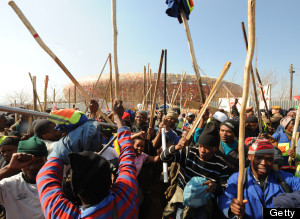 Two-thousand construction workers held up tools at the Soccer City Stadium during a demonstration in Soweto, outside Johannesburg on July 8, 2009. (Alexander Joe/AFP/Getty Images)

South Africa had been optimistic about the economic growth the country would see from hosting the World Cup. In 2008, the country estimated the games would create 695,000 jobs, have a gross impact of about $12 billion on the national economy and change foreign investors' perception of doing business in the rainbow nation.

However, final reports indicate the estimates were far off. FIFA said the 2010 World Cup raised $3.6 billion. But hosting the tournament cost South Africa more than $3 billion, 10 times more than the original price tag. The 309,000 visitors who attended the games -- 141,000 fewer than originally expected -- brought in about half a billion dollars. While companies working directly for the tournament recorded a profit, economic growth in the country reportedly slowed. In addition, South Africa was left with five new stadiums it can barely maintain.

FIFA's executive committee stunned the world in 2010 by picking Qatar as the host for the 2022 World Cup. 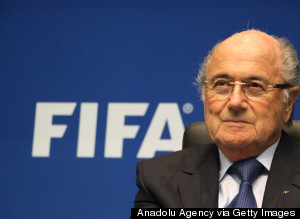 FIFA President Joseph Sepp Blatter during a press conference at the conclusion of the meeting of the FIFA Executive Committee in Zurich, Switzerland, on March 21, 2014. (Murat Unlu/Anadolu Agency/Getty Images)

Many have mocked the decision, questioning why the committee would choose to hold a four-week long summer sports event in the middle of the desert, where temperatures are expected to reach 122 degrees. FIFA chief Sepp Blatter recently admitted as much, saying the organization may have made a mistake in awarding the Gulf state the honor.

Qatar is expected to spend an estimated $100 billion on infrastructure projects and $20 billion on new roads ahead of the tournament. To construct its nine new state-of-the-art stadiums and 55,000 hotel rooms, it is drawing upon thousands of migrant laborers, mostly from Asia. It is the richest country per capita in the world, but its national workforce is among the smallest. It has an expatriate community of 1.39 million people, which amounts to more than 85 percent of the country's total population of 2.1 million.

In a study published in March, the International Trade Union Confederation concluded that the conditions of some migrant workers in the country amount to modern-day slavery. Four-thousand of the workers could perish in the desert nation before the 2022 World Cup even gets underway, the report found.

"Grown men said they were treated like animals, living like horses in a stable," the study says. "Tragically a small number of Qatari power brokers have chosen to build the trappings of a modern economy off the backs of exploited and enslaved workers." 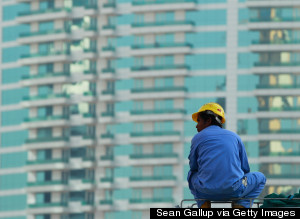 A worker takes a break at a construction site in the new City Center and West Bay district on Oct. 24, 2010 in Doha, Qatar. (Sean Gallup/Getty Images)

According to a separate investigation by the Guardian, migrants often have to pay middlemen large sums of money to get jobs. Workers say that their passports are routinely confiscated and that they depend on the goodwill of their employer to provide them with exit visas. They often work six days a week, and many complain of a lack of water, food and rest, the study found.

Qatar's authorities have admitted that hundreds of migrants have died in construction projects each year. The government insists, however, that no workers have died on World Cup projects. In an attempt to quell criticism, the country's 2022 World Cup organizers announced they would penalize contractors who violate the welfare of construction workers. In addition, it announced in March that it would reform its controversial labor laws that tie workers to a single employer. According to Amnesty International, the move is an important first step but falls short of what's needed. The ITUC said the proposals are "cosmetic" and that they won't eradicate modern slavery from Qatar.

FIFA has put the responsibility for reform on the state of Qatar and the companies employing the workers. Blatter, the FIFA chief, told reporters in March that while he acknowledges the organization has "some responsibility" for the rights of workers, he said it "cannot intervene."