It may or may not be the morning paper headline on June 13, 2010, the day after USA and England meet in a mouth watering clash in the World Cup Finals in South Africa. But it was the headline sixty years before, when the Americans sensationally bundled their colonial ancestors out of the 1950 World Cup in Brazil.

The game became known as the "Miracle on Grass." England were the imperial soccer power playing in their first World Cup FInals. They imagined a game against their inferiors would be a trot to glory. But they failed to figure in the spirit of what makes all World Cups memorable - the underdog. The USA bite came in the form of a Haitian immigrant named Joe Gaetjens (pictured scoring below) His first half goal ignited the crowd with magnificent disbelief. In the second half, the English threw themselves at the USA goal - shots, headers, everything but pictures of the King - but to no avail. The USA stood like a single rock of defiance, the spirit of 1776 running through the players bodies. 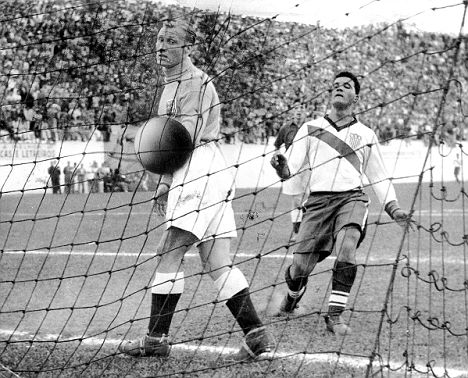 It was reported afterwards that an editor at an American newspaper misread the "1-0" score as "10-0" assuming England had hammered the Americans. There is no such danger this time around. The 2010 Team USA is no longer considered an also ran in world soccer. The news that England will be meeting their cousins again in South Africa next summer will be met with trembling English hands, and spilled cups of tea.

Alan Black is the co-author of the upcoming, The Glorious World Cup - A Balls Out Guide (NAL/Penguin)