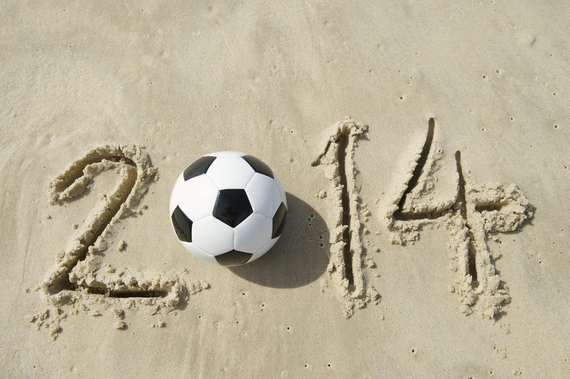 It started out obvious enough. "When will you ever again get the chance to see World Cup soccer played in the country (Brazil) that has come to be the embodiment of the sport that is in your DNA, the only country that surpasses yours (Italy) in World Cup championships, not to mention all that samba-soccer in the center of samba-culture itself?"

This is I, the Americana, championing our trip to Brazil, not he, the Italiano.

Had this been on my bucket list before I met my husband? Courtside seats at a Laker game, absolutely, but traversing to the far reaches of unpaved earth to see Italy play Costa Rica in a World Cup, absolutely not. When, exactly, did I become such fan of the Italian team? And shouldn't I be rooting for the U.S.?

I suppose the turn happened when we went to the World Cup in Germany in 2006. Hydroplaning to the games on pristine, unblemished autobahn in the backdrop of sweeping majestic hillsides, making stops in quaint, cobbled villages for mouthwatering bratwurst and sumptuous Rieslings on our way back after another exhilarating win, or taking a stroll along some tranquil, sun dappled stream in the afternoons when we weren't at a game. It couldn't have been more lovely, not to mention the fact that Italy kept winning, and winning, until they finally just won the whole thing. (Have you not seen the Dolce & Gabbana underwear ads?) Needless to say, I have fond memories of Germany.

We skipped South Africa in 2010, but Brazil? You have to go to Brazil.

I spent a solid week during Christmas scouring guidebooks, Trip Advisor, Google Maps; the cities where the games are being played are widespread to say the least, and not easy to get to. Infrastructure is tenuous at best, including a very antiquated telecommunications infrastructure. Goodbye GPS. "What's with the roads outside of Recife?" writes one Trip Advisor reviewer. Does she mean there are no roads? I guess we'll find out.

Italy plays their first match against England in the Amazon. Yes, the organizers have built a stadium in the middle of the malaria-infested rainforest.

"When are you ever going to see Italy play England in the Amazon? Can you miss out on an opportunity like that?"

Yes, he can. (So far, two people have died in the building of the stadium, which is still not complete.)

We're skipping the Amazon and beginning our trip in Recife, where Italy will play its second match against Costa Rica. Aside from the Amazon, we are considering ourselves lucky in that Italy's group games will be played in the northeastern coast of Brazil, far from the craziness of Rio and Sao Paolo and home to the country's most beautiful beaches. Recife, Natal, back to Recife, Salvador, then it's off to Rio or Fortaleza depending. At some point it becomes a guessing game. Will Italy make it out of their group? And if so, will they be first or second. If they're first they play in Recife in the Round of 16, and if they're second they'll play in Rio. These cities are all plane flights away from each other. Logistics like a shot in the dark. Do you bet on Italy being first or second, or neither?

P.S., everyone wants money up front, and with prices ramped up five fold, if you make a bet, you stick with it.

Anyway, I managed to come up with a two-week itinerary. We bought our plane tickets, paid non-refundable deposits to pousadas--going out on a limb here, no four or five stars, no Four Seasons.

Neither of us are people who can wing it, so I was relieved to have the trip organized and put away, until, a few nights later, reading in bed, I looked over his shoulder to see him engrossed in an article in the New Yorker, "Samba Soccer." In Samba mode, I immediately pulled the magazine up on my Ipad and began reading it, too. It was not a short article. Thirty intense, page-turning minutes later I turned off the light, sick to my stomach.

All night I tossed and turned, anxiety, sweats--could we somehow get our money back?

Beyond providing brutal insight into Brazil's native soccer culture, the article painted the worst possible picture of WC 2014. And this wasn't some saucy Italian tabloid, this was a thoughtful, intelligent analysis in a respected magazine: thuggish fans, riots, crowd violence, gun battles, a recent incident at an amateur soccer match where a ref stabbed and killed a player, a prison gang who'd threatened to ignite a "World Cup of Terror" for tourists if the government didn't cease its use of solitary confinement--sure, I've taken these words out of their context, but still... And by the way, why waste your time? To see REAL soccer you can just go to Barcelona or Madrid or Munich. The globalization of the professional leagues has turned the World Cup into amateur hour.

Brazilians are "getting out of dodge" during the World Cup, another disparaging take away from the article, disparaging because a very close friend and soccer soul mate of my husband's, who's Brazilian, whose family lives in Brazil, virtually said the same thing. "Don't go to Brazil," he wrote us in an email. "Don't go."

But going we are, against every fiber of our nature because we are people who like to live, and, apparently, we're going to be lucky to get out alive.

Jackie Townsend's second novel, "Imperfect Pairings," was released in May of 2013. Her new novel, I've Loved You So Long, will be out in the fall. Find out more about her books at http://jackietownsend.com.