The gruesome, botched execution of Clayton Lockett in Oklahoma Tuesday night has brought renewed focus on some of the grim realities of the death penalty in America. While the terrifying course of Locket's death is a relatively rare occurrence in American executions, the fact that the United States carries out death penalties at all makes the nation stand out among most countries of the world.

As Amnesty International notes in its 2014 report, about a third of the world may have a death penalty, but only nine nations across the globe still regularly execute citizens. As one of those nine nations, the United States finds itself in the company of states like Iran, China, Somalia, Sudan and North Korea. 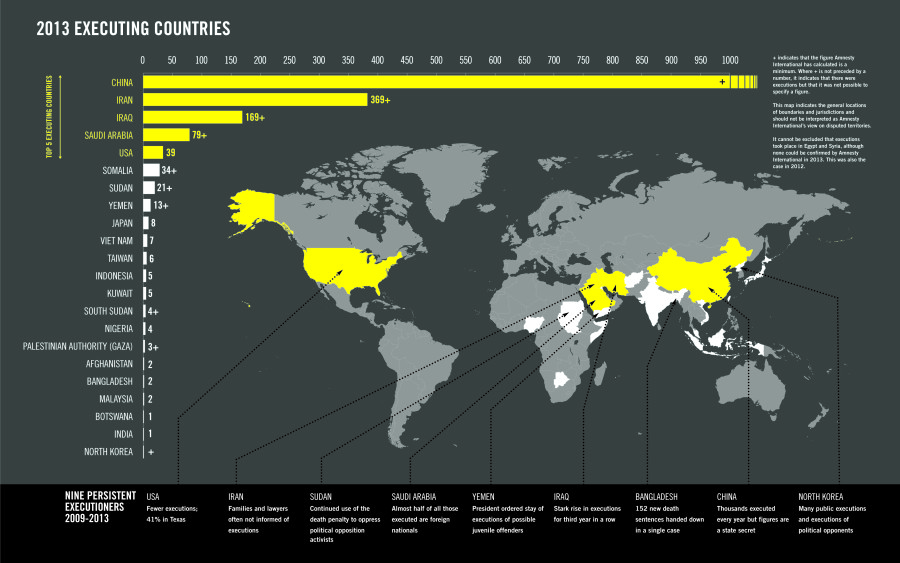 America's status is remarkable not only because of its position as an active and often vocal supporter of human rights, but as the map above shows, also due to its location. The U.S. is one of the very few western nations that still has a death penalty, and was the only country in the Americas to have executed a convict in 2013. Indeed, out of all of North America and Europe, only Belarus and Kazakhstan still have laws allowing executions.

U.S. neighbors Canada and Mexico both abolished the practice, in 1976 and 2005 respectively. The European Union holds the official position that "the death penalty is cruel and inhuman, and has not been shown in any way to act as a deterrent to crime." Europe goes as far as to make abolition a pre-requisite for membership, as well as banning the export of drugs that could be used in executions.

Out of the list of countries that do actively enforce the death penalty, most are authoritarian governments with a terrible track record of human rights. Seeing the United States listed among them is a strange sight, and one that should make death penalty advocates take notice of the company they keep.