TIANJIN, China - If the world seeks solace and stability for investors, it need only turn to the economic development zone in this city of 11 million, at least if we can believe the slogans on streets and brochures. The zone, TEDA, calls itself the "blessed land," an "eternal paradise for investors" and proclaims "tomorrow belongs to TEDA forever."

But the glow of this economic paradise, where "investors are kings," may not be eternal, especially as the contagion of Wall Street's convulsions reaches around the globe. 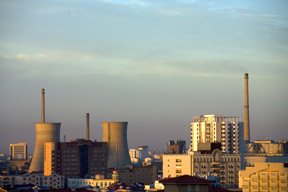 Looking out over a golf course amidst the haze of industry, I imagined endless supply chains: this is where the world's Stuff is made, a sprawling international port that rose to manufacturing powerhouse from a deserted salt pan south of Beijing.

These investors of tomorrow with factories here are companies like Motorola, Toyota, LG, Samsung, Panasonic, American Standard, VW, Alcatel. The list goes on, as do the gates to flat-roofed buildings that stretch along the highway and the seemingly infinite stacks of shipping containers that feed the world's product pipeline.

But market dives were clearly on everyone's mind, even amidst the Forum's sessions, which included tutorials such as "Alliance or Merger?" and "New Entrepreneurship - Chinese Style."

The rest of the world is facing some of its darkest days, William Rhodes, vice chairman of Citigroup, warned us. 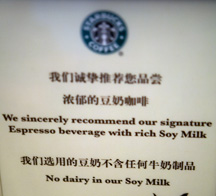 A Starbucks in Tianjin, China goes soy in light of dairy scandal.

"What is happening in the markets in the US is affecting the credit markets worldwide," Rhodes told the rapt audience. "We are in a crisis of confidence. There is just no confidence in financial institutions in the market."

"One of the things that must come out of this crisis that did not come out of previous crises is some form of international accounting standards," Rhodes said. "We really need a set of internationally accepted regulatory norms. We are too tied together in a globalized world."

This humility among the world's power brokers emerged as I looked over their shoulders watching Wall Street's drama unfold on the BBC and CNN, coincidentally in parallel with China's own tainted milk scandal. If there was a confluence for a confidence crisis, it was here.

The milk, spiked with toxic melamine to boost protein ratings, is an apt metaphor for the world's precarious position. Fess up, take responsibility and fix it before everyone gets sick.

"This issue has not been wholly resolved," Chinese Premier Wen Jiabao told us in an unexpectedly candid discussion about the tainted dairy. "But we will take speedy action to revitalize China's whole food industry. We will ensure that all China-made products are safe for consumers to buy."

For a conference "committed to improving the state of the world," it seemed like the list of things to fix was quickly outpacing any recent momentum toward a sustainable, healthier, more just world. Will all the hard-won gains be devalued along with the markets?

"When we face a crisis, corporate social responsibility and corporate global citizenship should not be put on the back burner," implored Klaus Schwab, founder of the World Economic Forum and ubiquitous host of the China meeting.

Coincidentally, half a world away, another collection of thought leaders, celebrities and business titans gathered to create tangible responses to global challenges. The Clinton Global Initiative (CGI) held its annual meeting in New York. In the face of economic crises, Bill Clinton solicited his audience, asking them not to blink from pledging their dollars toward solving the world's health, energy and poverty problems.

Unlike CGI, the World Economic Forum was more college than commitment. But this meeting, to my ears, was surprisingly candid and left its participants with plenty of homework.

When will things get better? Perhaps when confidence and morals return to the markets (and Chinese milk), said Premier Wen. "Entrepreneurs must also have the high moral ground. I wish they would have morality in their blood."

Yet with all the talk of transparency and accountability, it's ironic that Huffington Post remains blocked in China. Of course, much more happened during the Forum's sessions, workshops and meetings, most of which were closed to the press. But the Forum has a collection of session reports and streaming video online that provide a glimpse behind the scenes at the World Economic Forum New Champions

Topics of note, a sampling of what global economic leaders were discussing
Mega-Regions: Driving Growth and Innovation Globally
How Will Climate Change Affect your Value Chain?
The Global Financial Crisis: New Champions Respond
Fears About Food Security: A New Backlash to Globalization?
The Origins of the Universe: Why It Matters
China: A Green Champion in the Making?
BBC World Debate: Surviving the Economic Storm?
(link not published as of this posting)

In parallel, the Forum hosted its gathering of "young global leaders." One session, "Hypercomms," included a panel of digital all-stars who responded to the ramifications of an expanding Facebook world:

"The relationships these (young) people have with time and space are different. The fact they grew up on Facebook isn't something that they're going to give up (as they enter the business world)," said Josh Spear, co-founder of New York-based Undercurrent.

About Generation Y's multitasking propensities: "'Continuous partial attention' - we find it rude, but it's just a different communication tool."