United Nations Climate Change Conference - COP21 - is almost upon us. There are high hopes leaders gathering in Paris later this month, will come up with binding agreements to drastically curb carbon emissions to stop catastrophic climate disruption once and for all.

I, for one, am not holding my breath. However I'm quietly optimistic something sensible will be achieved - mostly because it HAS to.

Climate scientists admit it's going to be virtually impossible to stay within the agreed upon safe warming zone - 2 degrees Celsius by 2100. Largely because every international climate hoedown thus far, has been all talk with no meaningful action on the part of big polluters - i.e the U.S.

This is the twenty-first time leaders will talk climate - with more at stake than ever - the build up is decidedly heated.

While I'm not especially fond of hot weather and experiencing record breaking temperatures first hand - all this heat serves a purpose.

Before when asked why there wasn't more public concern about climate change, my reply was simple - our behinds are not on fire yet. Now the North- and Southwest are burning. What I can say - with acute chagrin - is this is it, game on with climate change. 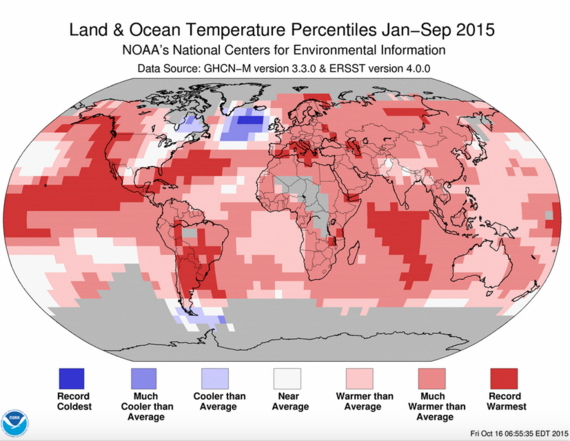 You see our hunter-gatherer brains -- while readily able to perceive imminent clearly visible threats such as tsunamis -- are really lousy at the perceiving slow-moving amorphous ones like climate change.

So now that climate change isn't dawdling anymore, it's got our attention.

Thirty-five-thousand people died in Europe during the summer heat wave of 2003. From Hurricane Katrina, a record one-thousand-five-hundred tornadoes in 2011, Superstorm Sandy in 2012, nearly two and a half thousand Americans have died in weather events all exacerbated by warmer ocean temperatures - a direct result of climate change. This past summer, heat waves melted pavement in India and killed several thousand there and in Pakistan.

In 2013 we passed the 400 parts per million (ppm) of carbon dioxide in the atmosphere mark. This hasn't happened for millions of years and never so rapidly - we're supposed to stay within 350ppm to be safe.

That same year the UN Intergovernmental Panel of Climate Change's fifth Assessment Report (IPCC AR5) stated at current emissions rates we're on track to triple atmospheric greenhouse gases by 2100, which would result in a meter of sea level rise and a possible temperature hike of 4-5 degrees Celsius.

Initially it looked as though this worst-case-business-as-usual burning of fossil fuels and runaway deforestation scenario would continue.

But something good is also happening.

In a myriad of meetings leading up to Paris, one-hundred-and-forty-nine countries have already committed to 'Intended Nationally-Determined Contributions' - their carbon emission reduction goals. These countries represent 90% of global emissions so it's a promising start.

However, collectively these INDC pledges only get us halfway to where we need to be with greenhouse gas reduction, leaving us at a dangerous 3 degrees Celsius warming by the end of this century.

So there will be much heavy lifting to do in Paris. French diplomats and government officials mindful of this are working around the clock to make their sit-down a success. In an unprecedented diplomatic and educational push they've targeted not only world decision makers, but also community leaders, NGO's, even school children.

The clamoring for results at COP21 is building, from meetings of thousands of inter-faith leaders in Utah, to actors bringing climate issues center stage in a series of international Climate Change Theatre Action events, and the masses of people already chanting daily in the streets.