Le-Bourget-Paris, France, Dec. 2--Major world leaders today launched an unprecedented global carbon pricing initiative, calling for nations of the world to put a price on carbon pollution to protect the climate and accelerate a transition to ä clean, sustainable energy future. The initiative is sponsored by the World Bank and the International Monetary Fund

The world leaders are participating in a carbon pricing coalition that includes 20 states, four Canadian provinces, and the state of California, as well as many large multinational corporations and banks, along with nonprofit organizations. Globally 40 nations and 23 states, cities, and regions have adopted carbon taxes.

International Monetary Fund Managing Director Christine Lagarde in an official statement said, "Given the slump in energy prices, there has never been a better time to transition to smart, credible and effective carbon pricing. Policymakers need to price it right, tax it smart, and do it now."

The Carbon Pricing Leadership Coalition emerged publicly at the UN's 2014 Climate Summit in Lima, Peru, where 74 countries and more than 1,000 companies expressed support for carbon pricing.

"Unless we drastically cut emissions and do more to help countries adapt," Dr. Kim warned, "the effects of climate change could push an additional 100 million people into poverty by 2030."

"The most direct and certain path to zero net carbon emissions before the end of the century is through carbon pricing," he emphasized. "Carbon pricing is critical for reducing emissions, preserving our environment, and protecting the most vulnerable."

"This is the right time to set the right price on the true cost of carbon on our planet," Dr. Kim declared. He called the growing momentum for carbon pricing, "a dream come true."

French President Hollande stated that all nations need not have the same carbon price or identical carbon pricing mechanisms, but that "the goal is to gradually set a sufficiently high price around the world to encourage better behavior."

France already has a price on carbon, and it will double to roughly €30 per metric tonne in 2017 and to a projected €100 by 2030, he said. "Very quickly," Holland said, "a company consuming less CO2 should gain a decisive competitive advantage." In conjunction with carbon pricing, he added, it makes no sense to put a price on carbon and at the same time continue subsidizing fossil fuels.

Hollande noted that, while carbon pricing isn't officially part of the UNFCC mandate, "No negotiation on climate can ignore the question of a carbon price." Movement toward a price on carbon is inevitable, he said.

Chancellor Angela Merkel concurred with President Hollande's conclusion that not all nations need to use the same techniques or the same carbon prices.

Canada's recently elected Prime Minister Justin Trudeau characterized carbon pricing as an opportunity to accelerate the development of a clean economy. Although Canada's Federal government has no carbon tax, Trudeau pointed out that the province of British Columbia "has a world-class, revenue-neutral carbon tax" and that Ontario and Quebec have committed to a carbon cap-and-trade system. Both carbon tax and carbon trade mechanisms, he said, serve to send a strong signal to producers and consumers "and reward smart choices."

Even the province of Alberta has taken significant steps toward a carbon price since its recent change in government, said Trudeau. The province's economy depends heavily on conventional oil, natural gas, and on tar sands deposits, which contain more than 160 billion barrels of proven oil reserves. There will be many different ways in many different economies to produce a low-carbon economy, Trudeau said.

Noting that Ethiopia has already been hard hit by climate change in the form of drought and other impacts, Ethiopian Prime Minister Hailemariam Desalegn expressed strong support for carbon pricing. Citing Ethiopia's potential to absorb carbon in reforestation and other ways, he indicated that Ethiopia would be a good place for other nations to invest in carbon-emission offset projects.

Endorsing the effectiveness of a carbon tax versus carbon trading, the Secretary-General of the Organization of European Cooperation and Development Angel Guria mentioned that Sweden today has a €100 tax on every tonne of carbon. "It works," he said, "and doesn't seem to affect competitiveness. It works better than the ETS (European Carbon Trading Scheme)." 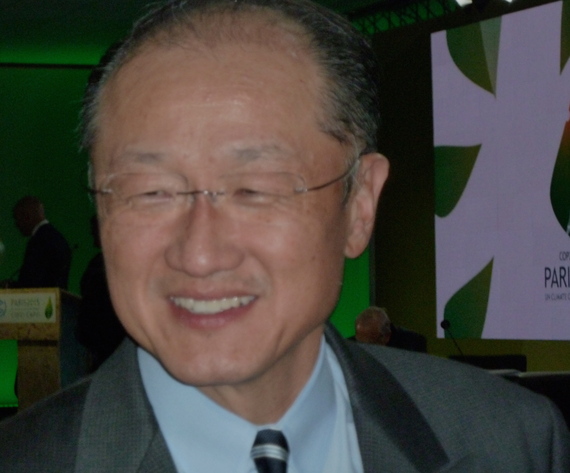 In closing remarks, World Bank head Kim said that the political hurdles facing carbon taxes can be reduced if revenue from the tax is used to help the poor. He concluded his remarks by calling for "a big fat price on carbon."

This is the second in a series of articles I am writing from the Paris climate talks where I am observing events from inside the restricted blue zone for accredited participants. This evening in an important step toward a final climate treaty, the conference's key task force submitted a draft text of a global climate agreement and draft conclusion to the President of the COP21 conference, French Minister of Foreign Affairs Laurent Fabius. The complex documents, with provisions on climate mitigation, adaptation, finance and many other matters, now will proceed to the next and final phase of the negotiations by high level ministerial officials of 196 member countries. The conference goal is to deliver a final text acceptable to all parties for adoption by the conference as a whole on December 12. (A text of the draft agreement can be viewed on the UNFCCC website.)

________
John J. Berger, PhD. (www.johnjberger.com) is an energy and environmental policy specialist who has produced ten books on climate, energy, and natural resource topics. He is the author of Climate Peril: The Intelligent Reader's Guide to the Climate Crisis, and Climate Myths: The Campaign Against Climate Science, and is at work on a new book about climate solutions.