The Internet is still the fastest growing medium for advertising, an international survey found, showing an upsurge of 16.3% in 2012 and forecasts of an average of 15% annual growth for 2013 to 2015. 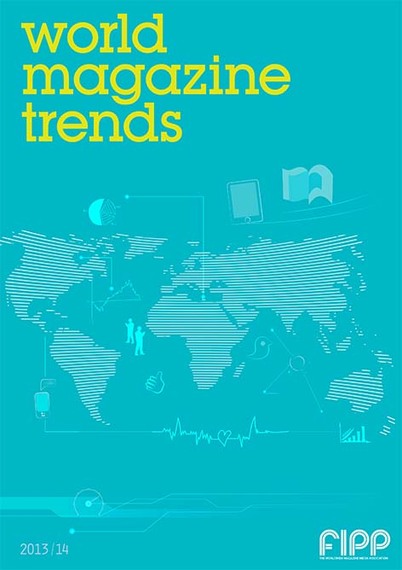 The 444-page survey said print editions of newspapers and magazines would continue to shrink at an average rate of 2%-3% a year, based on figures from the ZenithOptimedia agency.

PriceWaterhouseCoopers, which also contributed to the book, noted that digital revenue had seen considerable growth, from about $8.2 billion (8% share) in 2012 to an expected $15.2 billion (15% share) in 2015.

"This development is the same for both B2B (business-to-business) magazines (around 20% share of total revenue) and consumer magazines," it added.

The survey indicated most publishers had invested heavily in creating an attractive online presence to readers and advertisers through traditional display ads, which accounted for more than a fifth of total Internet advertising.

While the growth is pegged at 11%-13% a year, the problems are that online readers are worth less to advertisers than print readers since publishers have to compete for display revenues with every other website, it said, adding that real-time buying practices were eroding prices of premium content.

Needless to say, the fastest-growing Internet channel seems to be mobile, which by 2015 is set to more than double in size to $33 billion, or a quarter of all Internet advertising expenditure, ZenithOptimedia concluded. 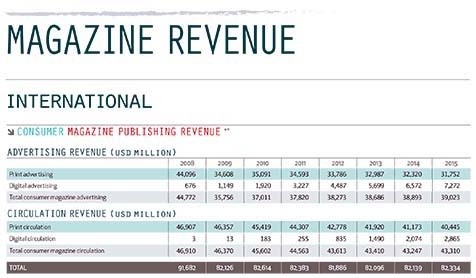 The hefty book is loaded with tables, figures, and infographics that dissect the industry in the minutest detail. 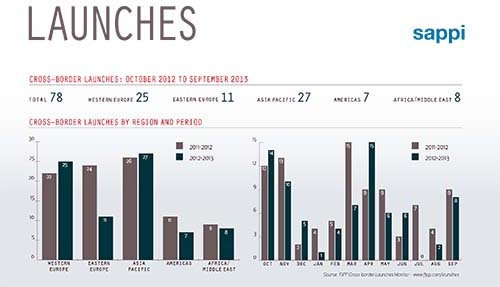 In a series of summaries, the FIPP book found that despite losses in print media in certain international markets, magazines were going strong in the Africa/Middle East region and seemed to benefit from upcoming economies. 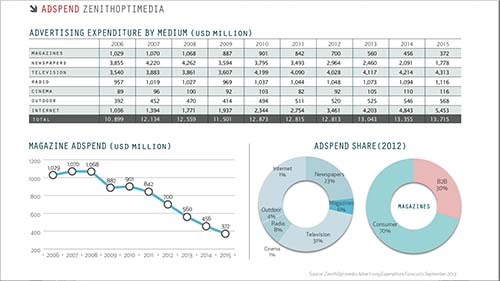 It said advertising expenditure increased by as much as 6.2% in 2012, which according to ZenithOptimedia was due to fast growing economies.

In an older market like Europe that has had its share of economic woes, recovery from the global recession has been slow but Central and Eastern Europe improved faster than other parts of the continent.

While digital is growing in Europe, it still lags behind the rest of the world in compensating for print losses. 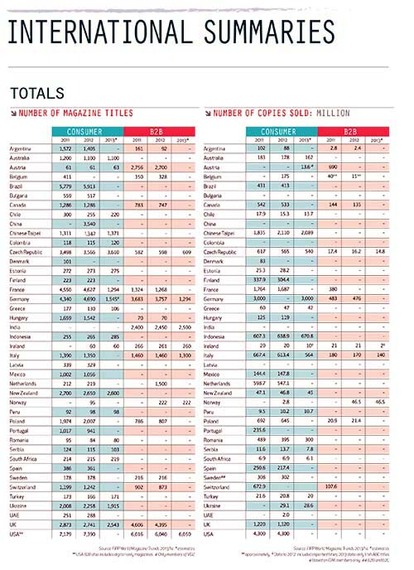 In North America, the good news is that magazines were not as hard hit as newspapers by negative adspend revenues but they still limped compared to TV, which enjoyed the largest slice of the advertising pie.

The study predicted total magazine revenue would decline by 6% in coming years -- an average of 1% per year.

But the magazine market was moderately positive and digital interfaces (mobile, tablets, Internet) were expected to lift the industry from the doldrums.

"The biggest challenge will be to compensate the inevitable losses of print revenue and to find ways to increase digital revenue in terms of absolute numbers," it said.

Although TV dominated the media landscape, magazines were going strong, the survey showed. However, PwC and ZenithOptimedia offered different figures.

"In 2015 the prediction is a growth of 6% (Zenith) or 20% (PwC)," it said, adding that digital penetration was slow and small due to relatively low Internet use in South America, which, in turn, affected the digital development of magazines in that region.

The book also provides a detailed section of 54 country reports.