I recently went on a trip to multiple locations in Africa, where I learned that although I can't save the world, I can help save one life.

I got more excited -- and nervous (mainly because I don't love to fly) -- as the big day approached. The travel doctor loaded us up on vaccinations; I think I got seven shots in all. There were Band-Aids up and down both arms, and she prescribed anti-malaria medication.

Our first destination with Malaria No More was Ghana, where the country is fighting the disease with the help of the U.S. and UK governments and a bunch of passionate and capable local and international partners including Malaria No More UK. The country is on track to make sure that every household is protected with a mosquito net by the end of 2012. Results so far are encouraging: Net usage among the most vulnerable groups -- pregnant women and young children -- increased more than 360 percent following the first regional campaign. I wanted to see what this transformation looked like firsthand!

Along with USAID and the U.S. President's Malaria Initiative, we attended what's called a durbar, which is like a ceremonial gathering of village chiefs and other elders. We were greeted with so many bright colors and fabrics...and joy! The village elders had us sit across from them as the village performed dance after dance in front of us. Drums were beating and children were cheering. It was remarkable and before I knew it, I was pulled up to dance in front of everyone. There was so much joy -- and tons of laughter!

The best part was when a group of young school children put on a skit about malaria. The kids cast me in the role of Assistant Doctor, but I was given strict instructions that they had been rehearsing for a long time and I had to stick to the script. This meant I was powerless when a young actor got sick from malaria. I couldn't save him with medicine; he had not slept under a mosquito net, and had not gotten tested in time for treatment to work.

While the play had an unhappy ending (the character died), it carried a crucial message: Mosquito nets prevent malaria and save lives!

From Ghana, we flew to Burkina Faso, which was a very personal journey for me. I have wanted to visit ever since the pre-school I built, Nioko, broke ground there a few years ago. I couldn't attend the opening because of work, but I was determined to get there one day. I just didn't expect that day to come so soon and with a greater purpose than even education itself.

Patricia, the school's headmistress, emailed while I was filming Smash this past fall saying she had not been able to respond because she had contracted malaria. Her students were also missing class because of repeated bouts with the disease. I came to learn that malaria is the leading cause of school absenteeism on the African continent causing up to 10 million missed days of school each year.

I couldn't wait to see the school for the first time. The morning of our visit, I woke up as excited as Christmas morning. Would the school be what I expected? Was Patricia as lovely and effective as I'd imagined? Are the kids happy there? Are they learning? All of those questions were answered in the first few minutes of our visit. The visit was everything and more than I could have ever imagined. Picture a huge plot of land with a pre-school, secondary school, as well as a health clinic and an orphanage. On the surface it didn't look like much, but underneath there was this amazing place that offered education to young women and children -- things I had taken for granted.

As soon as we arrived, hundreds of kids charged toward us with smiles on their faces. They lined up, sang songs and raised a flag to signal our arrival to the rest of the school children. Then they all went to class as we wiped tears from our eyes. We were all so moved. Never had we seen so much poverty but so much joy and enthusiasm to greet total strangers: Us.

We continued on to the pre-school, where tiny children sang songs in high-pitched voices. We clapped and laughed all together. They were singing their hearts out with the biggest smiles. They were adorable -- and each clung to their new Vestergaard Frandsen mosquito net our trip helped provide. A favorite pre-schooler was 3-year-old Fadila, who I hugged as tightly as she hugged her new net.

Check out photos from my visit, and keep reading below:

We then headed to the clinic, where three babies had been born the night before, including teeny twins. When we stopped by, at least one hundred mothers were lined up outside the clinic, seeking shade from the 117 degree heat, with babies bundled on their backs. (Some 400 to 600 babies are born there every year!) Sometimes, the only way you could tell there was a child was from seeing two tiny feet poking out from the swaddle of cloth on their mother's back.

Inside the clinic, the moms that had given birth the night before were sitting up and chatting with each other as their babies rested next to them. And as I handed a net to each of the new moms, they were overjoyed with the gift of a net and that their newborns wouldn't go a single night exposed to the dangers of malaria-infected mosquito bites. They clamored for the nets.

Since returning to the States, I get asked all the time if the trip was "life changing." That is a difficult question because my life is pretty much the same. I am either in the studio working on a record or shooting the show. BUT, what did definitely change is my perspective. There are so many people and children by no fault of their own who are in great need. I came away understanding that I would not be able to save the world but maybe in some way, I could help save even one person or one child. Sometimes I can feel overwhelmed that there is too much to do and I am only one person, and so I get frozen and do nothing. But if I look at things in terms of one child or one person it is not as overwhelming, especially with malaria. One net can cover two kids a night. A donation of $1 from 10 people can go towards one net. Only $10 will buy a life-saving net. My perspective on the needs and how to help has totally changed. I came away touched by the fact that something as simple as a mosquito net could make such a difference in the life of a baby, student, headmistress, or a new mother.

Statistically, malaria is a totally preventable disease. However, the need is greater than we could accommodate on one visit to Africa. But no matter where we are from or our background, we can help. It is easier than we realize.

Today a child still dies every minute from this disease, but it doesn't have to be this way. That's why I want to challenge each of you to take 1 minute this World Malaria Day to make a difference. Here's what you can do:

Visit MalariaNoMore to make a $10 donation for a life-saving mosquito net that will protect two children from malaria.

Follow @MalariaNoMore on Twitter and tweet this message today: This World Malaria Day let's keep a child from dying of malaria every 60 secs. Take a Minute to #endmalaria http://bit.ly/HKvqjt

Like Malaria No More on Facebook and update your status with this message right now: This World Malaria Day, let's keep a child from dying of malaria every 60 seconds. Take a Minute to #endmalaria http://bit.ly/HKvqjt

Take a minute to #endmalaria. If we all do that, we can make this World Malaria Day one of our last.

***
Minute to #EndMalaria is a collaboration between Malaria No More, the United Nations Special Envoy for Malaria, Lady Gaga's tech startup Backplane, and other health and tech partners.

World Malaria Day: The Faces Behind The Numbers 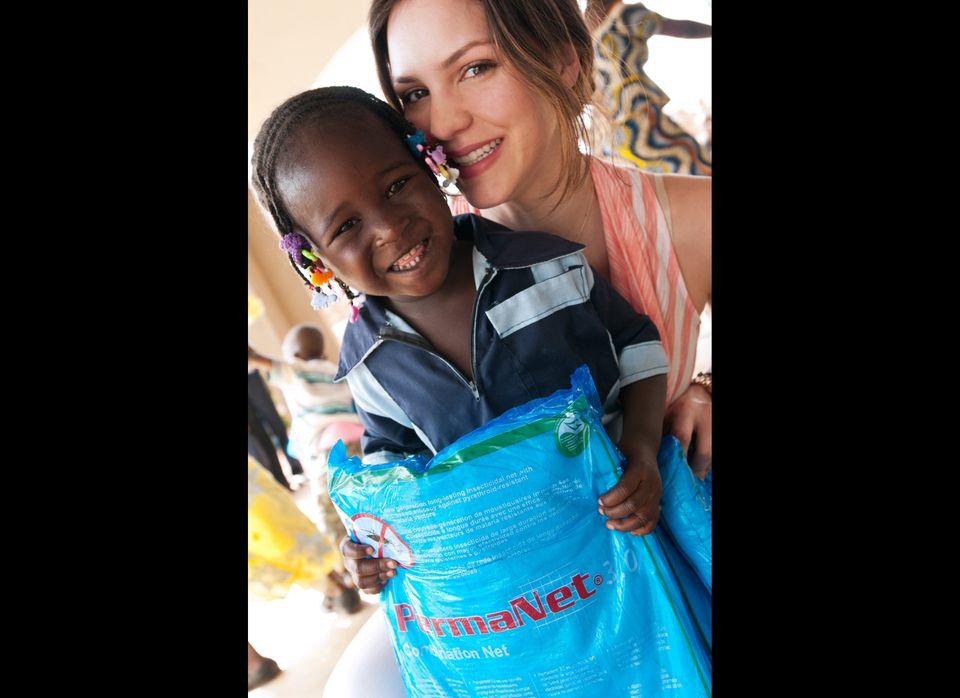