Despite the new law prohibiting hanging out in the buff, hundreds of San Franciscans decided to bare it all Saturday, combining three of the city's favorite pastimes: biking, protesting and being naked.

The World Naked Bike Ride, an international demonstration against fossil fuel dependence, snaked through San Francisco this weekend, drawing activists of all shapes and sizes who toted signs declaring "Less gas, more ass" and "put the fun between your legs." A similar event took place in Sydney, Australia.

Cognizant of recent legislation, organizers cautioned participants to cover up their most private of parts. "To be legal, you just need to barely cover your genitals and rectum. Going naked outside the main group will definitely get you cited," the website warned. "This will be a test to see how far we can push the limits."

Still, the tone remained lighthearted. "Now more than ever, we need you to call attention to environmental activism, body freedom, bicycling as an alternative to cars and a generally greener way of living," the website continued. "If nothing else, it's a fun, light-hearted, wacky way to use your colorful, vulnerable body to advocate."

Take a look at images from the ride below, courtesy of Flickr users khanhky, Daniel S. Levine and Jerry Donato (caution: adult content): 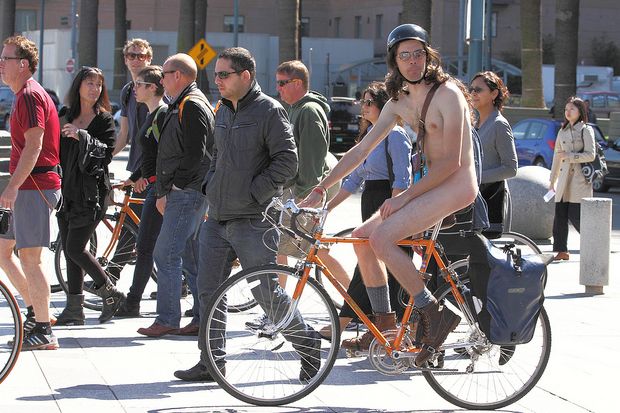