It all began with a dreamt trip to Mars.

Jay Scheib, a stage director and professor who heads the theater arts program at MIT, was told by a student of his that she planned to be the first person on Mars. When he found out that a one-way mission to the red planet was being planned by NASA, he got curious. "So I asked the 10 or 15 people in my studio, 'How many of you guys would go one way? You're not coming back, you're going one way.' And they all said yes. You would go to Mars and spend your whole life building a new society."

From this sprang a multimedia theater trilogy called "Simulated Cities, Simulated Systems." The first part was based on Scheib's reading about a research station in the Utah desert where scientists do one-to-one simulations of life on Mars. The second part -- Bellona, Destroyer of Cities -- was adapted from Samuel R. Delany's complex, cryptic and loved-or-hated 1975 novel, Dhalgren. It's about a fictional Midwestern city cut off from the rest of the world by an unknown catastrophe. 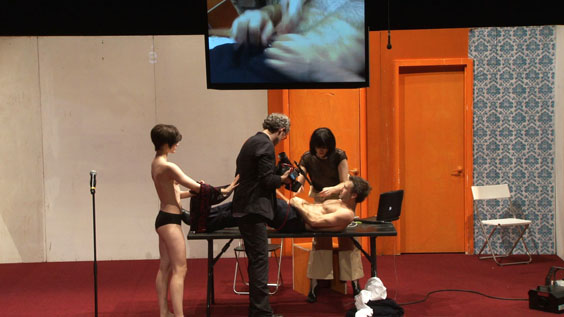 (from the left) Laine Rettmer, Jay Scheib, Rosalie Lowe, and Jon Morris (on the table)

Says Scheib, "The basic premise is that a black activist is assassinated, and the ensuing riots destroy the city much as in the story of Sodom and Gomorrah the city is burnt to the ground. In the aftermath it's still impossible to find one decent human being... the city is just doomed to burn again and again and again. And in the middle of this city that's trying to learn something about itself, admit its faults, there's a young woman who's trying to learn how to become a poet. Bellona... has do with urban planning, and sort of conceptual civil engineering, and the way cities can be designed in a way that they fail, without any question."

The final part is World of Wires -- loosely based on a 1973 sci-fi TV series by German film provocateur Rainer Werner Fassbinder. Wikipedia notes:

"A story of realities within realities, World on a Wire follows a researcher, working at the institute of cybernetics and future science, who begins to investigate the mysterious death of his mentor. He falls deep into the cover up behind a computer capable of creating an artificial world with units living as human beings unaware that their world is just a computer projection."

That show had been adapted from New Orleans-based Daniel Galouye's pulp sci-fi novel Simulacron-3: "I went looking for the first example of a human being plugging themselves into a machine, plugging their consciousness into a computer reality. 1964!" 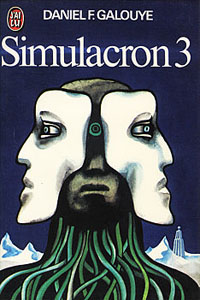 Scheib and his award-winning troupe recently performed World of Wires at Maison des arts de Créteil in Paris, after receiving praise in Nantes and Krakow, and hopes to bring it to the U.S. later this year.

Fassbinder was a dark and brooding visionary, and yet Scheib's hyperactive and often chaotic play is replete with comedic elements, an array of quixotic characters, and plenty of frantic sex. Mounting it in Paris brought it full circle, since that was where Fassbinder shot the original TV show, also inspired by Godard's Alphaville. Thematically, it anticipated Blade Runner (1982), with artificial humans yearning to be real. But one could easily make the leap to 21st century social media. Facebook is a kind of simulated reality, where identities are constructed, partly real and partly contrived, in a communal software crucible. 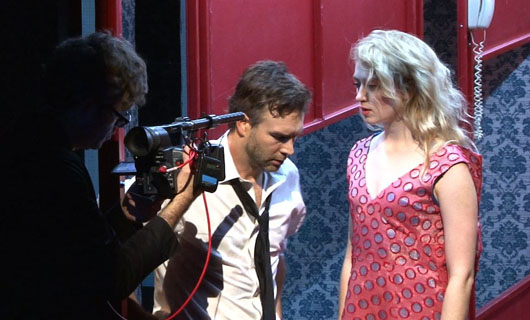 (from the left) Jay Scheib, Jon Morris, and Rosalie Lowe

Another influence on Scheib was a paper titled "Are You Living in a Computer Simulation?" by Nick Bostrom, a philosophy professor and the director of the Future Humanity Institute at Oxford. "Bostrum basically comes to show that there's a very high probability that we are! Technnology isn't invading our lives; technology is our lives," says Scheib. "Bostrum posits a computer simulation run by an advanced civilization that's trying to understand its own genesis. That we would in fact be part of a real-time computer simulation that is teaching someone about how they evolved." In this scenario, we're all just specimens under a microscope, which is how World of Wires can come to seem at times, while remaining very human, and even poetic.