Traveling is my greatest passion. I love exploring the world. I have been traveling my entire life and as a result, have friends of different socio-economic positions, backgrounds, and faiths in nearly every corner of the globe.

In August 2014, while staying in the village of Tembi in Java, Indonesia (about an hour outside of Yogyakarta, aka Jogjakarta, or Jogja for short), I took a private yoga class from a woman named Sosio. The class, and our conversation afterwards were so moving, I wrote about it.

Given last week's events, it felt appropriate to post our story again here:

This is a photo of me with Sosio. Sosio is Sundanese from West Java, but has been living in Jogya for the past 20 years. I took a private yoga class from her today here in my adopted village of Tembi, on the island of Java, and as usual, I cried. 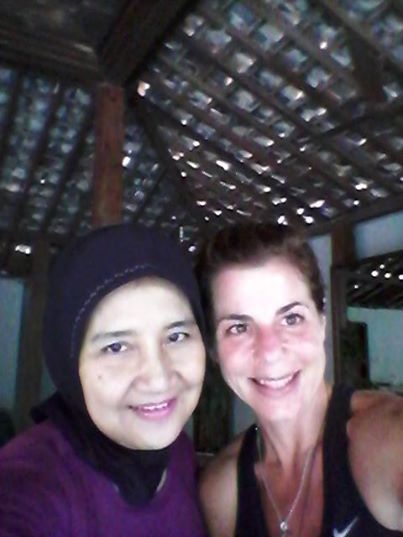 She's Muslim. I'm Jewish. She was covered head to ankle; I was not. She was masterful, elegantly flexible. I was so out of practice and inept, we more than once found ourselves cracking up over it. I could not care less about religion. It is central to her life. As we practiced together side by side, outside, wind blowing through palm trees, birds chirping, roosters roostering, Hindu music playing as she called out in Sanskrit the asanas, the afternoon call to prayer began, a sound I've always loved, beckoning the men of the village to come pray.

I was so moved by the crazy, amazing, beautiful juxtaposition of a Jew and a Muslim finding inner peace together by practicing yoga while listening to the call of prayer play over Hindu music, I burst into tears. She took it in stride.

Afterwards we sat talking for a while, about her life, and mine, and why people fight when we're all so fundamentally the same as humans, beneath all the trappings of politics and religion. Then at almost the same moment -- as if to drive home the point -- we asked each other if we could take a photo together...(wait for it) for Facebook. Meet Sosio...my new FB friend.

Then she asked me why I wasn't married -- the question I have been asked by a jillion people in as many countries. I told her what I tell everyone...that I'm not ready yet, and maybe I'll marry when I'm older, like when I'm 60...to which she responded -- after knowing me one hour and 10 minutes, "I think you will marry someone much younger, like Demi Moore did."

We hugged goodbye and said we'd see each other soon on FB.