Fred Schilling, 65, has gotten used to people chuckling when they first hear about World Plumbing Day.

He also knows they’re likely picturing some sort of Hallmark holiday when people slip a tip to the guy who saves the day when the plunger can’t.

But as the event celebrates its fifth year on Wednesday and a number of impressive milestones, Schilling is feeling pretty confident that people in the U.S. will soon get to know the day that recognizes plumbers’ role in preventing waterborne diseases and helping to bring sanitation to the 2.5 billion people who don’t have access to a clean, private toilet.

The awareness event was first established by the World Plumbing Council in 2010. That same year, a 7.0-magnitude earthquake devastated Haiti, and Schilling, a master plumber, found his second sanitation calling.

The founder of Florida’s Pipeline Plumbing, who started his thriving company with just one truck about 40 years ago, was easing into retirement when he became riveted by the horrifying news clips coming out of Haiti. Having launched his career in the Air Force where he’d deploy after an earthquake or tsunami with just two hours notice, Schilling figured he was the perfect guy to fix Haiti’s water systems.

“It shouldn’t be too complex,” he told The Huffington Post of what he thought at the time. “We’re going to jump in there and we’re going to fix this. It’s what I’ve done my entire life.”

But what Schilling didn’t know then was that Haiti was so underdeveloped, there were barely any water mains to “fix.”

In fact, contaminated water is such a grievous issue in Haiti that it’s the leading cause of infant mortality and illness in children, according to International Action, a Haiti health group. 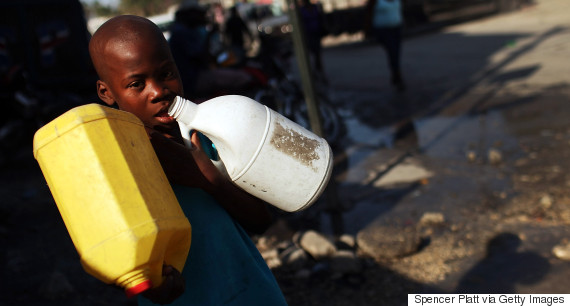 A child waits to fill jugs with water on March 6, 2012 in Port-au-Prince, Haiti. (Photo by Spencer Platt/Getty Images)

The situation became so deleterious, that since the earthquake hit, there have been more than 380,000 cholera cases, an infection that occurs when water, sanitation and hygiene practices are inadequate, according to the World Health Organization.

In the wake of the tragedy, Schilling was prompted to head to Haiti by Domenico DiGregorio -- a Seattle-based plumber who was in the process of founding a nonprofit. That first mission trip marked the beginning of Plumbers Without Borders, a group that pairs plumbers with disaster zones and areas in desperate need of sanitation and clean water.

It has no relation to the medical aid group Doctors Without Borders.

Five years in, the organization has about 400 vetted plumbers in its database, with members spanning the U.S., Africa, Australia, the U.K. and elsewhere. The volunteers link up with on-the-ground organizations in impoverished areas to improve plumbing in medical facilities and install water purification systems.

What makes the group work so well, according to DiGregorio, is that plumbers pretty much all speak the same “language,” and ending water crises is often just about employing a skilled person in time to address the issue.

“People need to realize that 90 percent of waterborne diseases can be solved if you have proper plumbing,” DiGregorio told HuffPost. “There’s a lot more to it than everything flows downhill.” 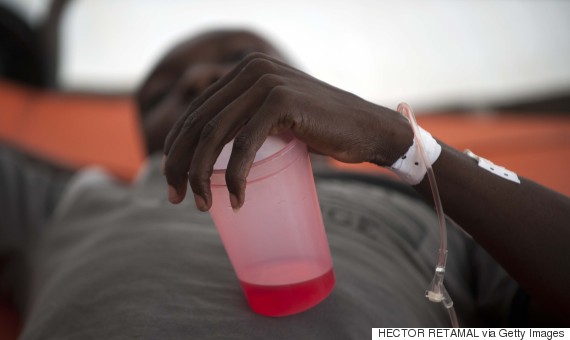 A cholera patient is treated at the Doctors Without Borders in center in the Martissan area of Port-au-Prince on December 9, 2014. (Photo credit HECTOR RETAMAL/AFP/Getty Images)


Schilling partnered with a group out of Seattle University, which helped defray some of the costs, and spent $3,000 of his own money to fund his trip. But when he touched down in Haiti, he quickly realized that the sanitation issue would have to take a backseat to providing clean water.

"I had spent my whole life training, educating to take on a project [as big as] the Empire State building," said Schilling who, in 1982 worked as the plumbing contractor for Six Flags Atlantis in Hollywood, Florida, which at the time was the world's largest water theme park.

"But I had no concept as to how undeveloped Haiti was … that it basically had no plumbing. We had to rethink this," he added. 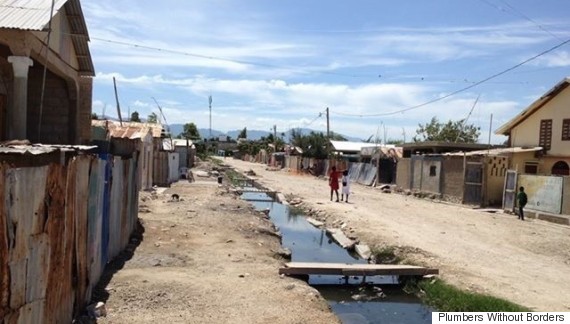 At that same time, a group of graduate students from Seattle University had developed a water purification system that could produce 10,000 gallons of clean water every 24 hours.

The issue, at that point, however became getting the purifiers into the country.

Every import, including lifesaving medications, was getting held up at the border by the government and taxed enormously.

That’s when Schilling met with Food for the Poor, a Florida-based nonprofit that feeds about 20,000 people in Haiti seven days a week. It had permission to ship in food for the needy with ease.

Schilling arranged for the graduate students to send the purifiers to the Coconut Creek, Florida, headquarters. When they arrived, Food for the Poor boxed the instruments into their food packages so that they could be delivered without any holdup, Schilling said.

By 2012, Plumbers Without Borders had succeeded in installing 15 such purifiers, which Schilling said is like “winning the lottery” to people in Haiti.

Since that first trip, Schilling has returned to Haiti nine more times, but his mission now has evolved to helping the country become more self-sufficient in tackling sanitation issues.

According to the CDC, 49 percent of rural Haitians rely on open defecation.

To help reduce those figures, Plumbers Without Borders partnered with toilet manufacturer American Standard Brands, a company that won a grant from the Bill and Melinda Gates Foundation for its SaTo toilet pan in 2012. The no-frills system closes off pit latrines from the open air to minimize odor and keep insects from spreading diseases. 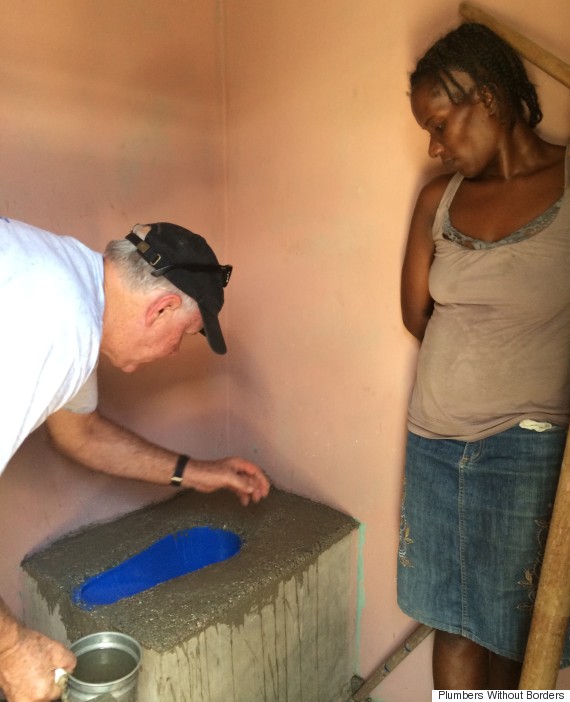 Last November, the company agreed to start licensing the SaTo pan in Haiti. It’s a breakthrough that could bring 5 million toilets to the country in five years, Schilling said.

But the goal now, though, is improving plumbing education in Haiti so that local graduates can install these toilets and also take on major contracting jobs with hotels and clinics that developers typically outsource to foreign workers.

Currently, Haiti Tec, the county’s school which offers technical and vocational training, only has a one-year plumbing program, and it’s pretty rudimentary, according to Schilling.

By comparison, to get certified in the U.S., a student must first complete a two- to five-year program. Becoming a master plumber requires three years of working on the job and then passing an exam, Schilling noted.

Plumbers Without Borders has held plumbing workshops at Haiti Tec and hopes to eventually work to expand the program.

It’s also working on finding ways to encourage more women to get involved in the industry to close the gender inequality gap. The organization recently applied with Haiti Tec for a $500,000 Gates Foundation grant that would launch a women-specific plumbing program.

The interest is already there, as demonstrated by the lengths to which students will go to impress Schilling.

When he held a workshop back in 2011, the area was still devastated, yet half of the students showed up to Schilling’s lecture wearing suits.

“All I had seen was people living in streets and in blue tarps. How in the world could you have a clean suit and tie on?" he said. “That was their way of showing respect.”

When he conducts a similar program in Florida, most people show up in flip-flops.

After a Seattle University graduate student recently gave a lengthy talk on such cumbersome topics as water testing in Haiti, Schilling expected the students to doze off. Instead, they spent two-and-a half hours after asking pointed questions.

“They didn’t miss one word,” Schilling said. “This is life or death for them.”

To take action on pressing sanitation issues, check out the Global Citizen's widget below.

CLARIFICATION: This story has been updated to reflect the number of people Food for the Poor serves every day in Haiti.