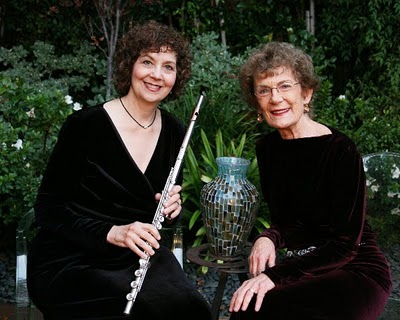 A world premiere and three works of venerable vintage opened the 14th season of Chamber Music Palisades Tuesday evening. A series that prides itself on juxtaposing the old and new noted two significant birthdays, the 100th of American composer Samuel Barber and the 200th of German composer Robert Schumann, both of whom were represented on a full program at St. Matthew's Parish in Pacific Palisades.

Co-founded and directed by flutist Susan Greenberg and pianist Delores Stevens, the series naturally favors works for those instruments. On this occasion, virtuoso oboist Anne Marie Gabriele also joined in, as well as the Lyris String Quartet (Alyssa Park and Shalini Vijayan, violins; Luke Maurer, viola; and Timothy Loo, cello) in their series debut as an ensemble. 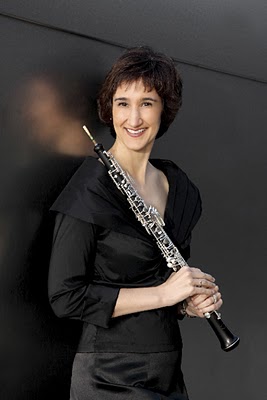 Featured was a work by composer Peter Golub, director of the Sundance Film Music Program, and known as a specialty composer for ballets (The Gilded Bat, The Lost World, etc.) and film (the award-winning Stolen, American Gun, and Wordplay, among others). The versatile Golub also specializes in the slender but important genre of incidental stage music.

As might be expected from his theatrical background, Golub favors atmospheric, accessible music, suggestive of programmatic associations, all of which were apparent in an evocative new score receiving its world premiere, the Quintet for Oboe, String Trio and Piano. It was performed with great flair and sensitivity by oboist Gabriele (pictured at right), with members of the Lyris and Stevens.

The composer's program notes had mentioned the depiction of human "affects" in works from the Baroque, Classical and Romantic eras, suggesting this work would also examine various emotional states. His remarks prior to the performance provided no narrative in the piece, but did reveal the composer's affinity for lyrical musical treatments that exploit sonic possibilities between the instruments.

This Trio's three movements are titled "Passages I", "Passages II" and "Epilogue." The first movement's Impressionistic landscape featured a piquant, upward soaring melody with a series of falling thirds from a protagonist oboe, flitting above a feather-bed of sustained string harmonies and bass piano, and punctuated with a walking-like figuration in the piano's treble register, all becoming more urgent toward its close. The second scherzo-like movement had syncopated, imitative strokes between the piano and oboe, with pouncing dissonances and pizzicato obbligati on the strings. Tone clusters and a rocking rhythm continued the mood of light-hearted jeu d'esprit, with tingling chimes in piano octaves. The third movement's elegiac mood was more wistful than tragic, with additional chiming effects in the piano and a series of searching lines from the oboe wrapped in the warmth of the strings.

There is a gentle sensibility and wonder in this work, in its last movement a feeling of nostalgia. Overall the musical treatment was more suggestive than definitive, and its clear instrumental writing, including a number of jewel-like dissonances, registered well in the otherwise slightly tubby acoustics of the parish sanctuary.

The program opened with Impresiones de la Puna for flute and strings by Alberto Ginastera (his last name pronounced with an English "J" sound, as pointed out by KUSC-FM host Alan Chapman, who provided the evening's running commentary, and who should know a thing or two about pronunciations).

The Puna is a cold, arid region in the Argentinean Andes, and indeed this early work (composed at age 18) invokes still and windy heights. Greenberg's flute was again the protagonist, with its lonely bird in flight supported by the strings in the "Quena" movement, a languorous singer in its "Canción," and a Latin lover, alternating between rhythmically hot and smolderingly warm, in its final "Danza" movement - overall a colorful nationalistic set from the precocious composer.

Samuel Barber, a Pulitzer Prize-winning American composer who was born just one hundred years ago, is best known for his Adagio for Strings (originally a string quartet movement), a work so popular the composer felt compelled later to set it for vocal forces. Ms. Greenberg returned the gesture in a short song cycle for voice and piano, the Mélodies Passagères of 1952, by transposing its voice part to flute. The five short lyrics by Rainer Maria Rilke were printed in the program as a guide. The transcription worked beautifully in Ms. Greenberg's sweetly articulated renditions, supported by Stevens on a rapturous piano. 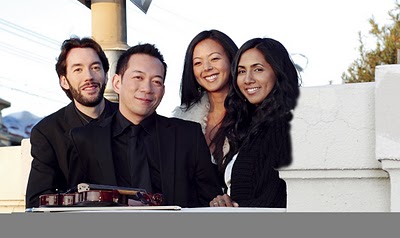 Robert Schumann, born just one hundred years before Samuel Barber, was featured in his Quintet in E-flat Major, Op. 44, a complex work of big-boned, symphonic dimensions with thick sonorities. Schumann was keenly aware and made the most of the heroic connotations in the key of Eb (as with Beethoven's Eroica symphony and his Emperor piano concerto). But as just one of its many felicities, the rondo-like slow movement's steadily paced march theme is also eerily reminiscent of similar ones by the composer's other beloved predecessor, Franz Schubert.

Pianist Stevens and the Lyris Quartet made the Schumann the most arresting of the evening's performances, with Stevens prominent among the five star performers. The piano part is Herculean in its running passagework, but everyone gets a workout in this pinnacle of early Romantic era chamber music. It was to become a model for many similar works to come. The only reservation in the performance related to the church's acoustics, which overemphasize bass and middle-register overtones. In a work as densely scored and passionate as the Schumann, that led to an almost deafening racket in the confined space of the parish chamber. But no one was heard complaining in the presence of such a masterpiece.

Chamber Music Palisades is a worthy series. Its musicians, all regulars in the Los Angeles film and TV music scene, provide L.A.'s Westside with a surfeit of concertizing energies that amplify the good fortune of America's creative capital.

Further details of the performance and upcoming events can be found on the Chamber Music Palisades website, or by calling 310-463-4388.

Rodney Punt can be reached at Rodney@artspacifica.net