The plucky Shrunken Shakespeare Company has had some pretty big scores for their productions and parties considering they've only been around since 2012. On Monday, June 8 you can join them as they present the world premiere of Ira, a screenplay based on Ira Alridge, the first African-American to appear on the London Stage. The work was written by Royal Shakespeare Company member and Olivier-winnning Chukwudi Iwuji, and will be read by an exciting cast of film and theater stars. Iwuji will read as Ira and Madeline Brewer will play Margaret Gill, his English wife. Adam Shulman (Dukes of Hazard: The Beginning, Song One starring Anne Hathaway) and directed by Danya Taymor (Theatre for a New Audience, The Public, The Flea) directs the show and proceeds benefit Shrunken Shakespeare's education initiative and The Actors' Fund.

I shot Chuk, Adam and Danya a few questions about the event and here's what they said.

TR: What has the creative process been like writing this script?

CHUK: The creative process has been more of a learning process for me. This is the first script that I have ever written. I had to learn how to write. I bought a book called the Screenwriter's Bible by David Trottier, bought final draft and went back to school, as it were. I was playing Henry VI at the Royal Shakespeare Company in Stratford. I decided that the best place to write was in an empty theatre. So after every show, I would write from about 11:30PM till 2 or 3AM before going home. That was the technical side.

Creatively, I had to embrace the fact that film is told in pictures. And if pictures can tell the story, use them rather than words. My first draft was Tolstoy-esque in size; 289 pages of people talking a lot. But then there is this amazing thing that happens when you realize that you can use one line, or even one word to say or at least suggest what this character is feeling. The process just then became about finding the balance between what is said, seen, inferred or sensed. The biggest creative input for me though was simply life and time. It's been 8 years since I started the first draft. Death, mistakes, triumph, reappraisal, joy and grief all take their toll and affect the story you wanna tell.

TR: How does it feel to be in the spotlight as a writer in addition to being an actor?

CHUK: As an actor, I really don't feel the 'spotlight' anymore -- or if I do it doesn't register beyond the familiar readying oneself to get the work done, well. I think that thinking in terms of spotlight is death for an actor. As a writer though, this is a bit nerve wracking. Like I said, this is my first script and when the actors convene to read it, it will be the first time that I have ever heard it out loud. Talk about moment of truth. But there is something immensely wonderful about knowing that people are coming together to perform and see something you have created, no doubt about that... Right now, I feel excitement, come June 8th, it might be an entirely different sensation.

TR: Have you noticed any parallels between Ira's career and your own?

CHUK: It seems almost indulgent to say, yes, I have noticed a lot of parallels between Ira's and my life; but perhaps, that can be tempered by mentioning that I did not think of those parallels when I set out to write this. My mom had just been diagnosed with cancer and I knew with a sad finality that time was running out. I had first heard of Ira's story 5 years earlier but it took this need to celebrate the incredible 54 years she and my dad had known each other to really get me writing.

There was an entry in Ira's journal that did it for me. He wrote it two years after his wife's (Margaret) death. It read "July 24, my fifty-ninth birthday, in health thank God. Dreamed pleasantly of my Margaret." I knew that was my starting point, my cue. Then on my first day at Stratford someone had left a postcard wishing me luck on my dressing room table. The picture on the front looked like a valiant portrait by an aspiring if not brilliant artist of me. Then I read the inscription and it said "Ira Frederick Douglas". That was pretty much it. No such thing as accidents. I began to write. It was only as draft after draft went along that I realized, wait, this is kind of me. I'm a Nigerian born guy who is chasing his dream on the British stage, dealing with if not the same problems as this guy did, then more subtle ingrained descendants of it. Would you believe that despite rave reviews that the shows garnered there were still articles in 2006 screaming bloody murder that a black actor was playing a Historical King of England? Go figure.

TR: Sacrifice is a theme in this story. How do you believe sacrifice factors into creating art?

CHUK: I don't think Sacrifice is specific to art. I think that any time you decide to dedicate yourself to anything, not out of necessity but passion or choice, there has to be sacrifice. Sacrifice is the difference really between a life just lived and a life fully lived. This can come in any walk of life because there will constantly be crossroads along the way. Once you choose one road, you don't necessarily give something up on the other. I think people have an impression that there is more sacrifice in art because our lives and work are in the public eye, and if you are not in that tiny percentile, these efforts aren't usually fiscally rewarded, so the sacrifice seems greater. But teachers, GPO's, healthcare workers, peacekeepers, lose a lot too and the money isn't that much better. Rather than thinking of it in terms of suffering, I think of it more as commitment.

ADAM: I read a quote a few weeks ago by George Bataille, a French philosopher, he said something to the tune of sacrifice is the creation of sacred things. Art, for me, is one of the most sacred and natural things we can do. It is itself a life force.

TR: What drew you to wanting to be involved in the first ever reading of this specific script?

DANYA: Chuk is one of the greatest actors I've seen onstage. I was immediately intrigued that he set out to write a screenplay, and I read the entire thing straight through as soon as he sent it to me. The journey of the script is immense, and deeply examines the relationship between struggle and artistry. It is always exciting to work with a great artist on a project that is so personal to them, which 'Ira' is for Chuk. The writing is so vivid and strong, I knew that I wanted to be part of the life of this project.

ADAM: The script itself. The writing is transportive and compelling. And Chuk, his passion and vision, I knew it was something I wanted aid in manifesting. Getting to work with Danya is icing.

TR: What do you think the future holds for the piece as both a film and as a possible stage play?

CHUK: I have always seen this piece as a film. I was approached about five years ago to adapt it for stage and I just didn't think that was a big enough stage for it. By big, I mean the size of audience I think this should reach. I want it to reach the biggest possible audience. Saying that, if someone came up with ideas for making it a stage play down the road that would be true to the story I want to tell then I would be interested. Right now, I feel that my energy is really focused on getting this on the big screen. I remember having a long conversation with Annette Bening about the script. She mentioned a "claustrophobia" in Ira and Meg's relationship -- an us against the world -- that is crucial for this story to work. I just think would be hard to capture on stage. But I might be wrong. Saying that, I have been approached recently about adapting it. I'm happy to keep an open mind about it.

ADAM: I try to focus on the present.

TR: How did you first get involved with Shrunken Shakespeare?

CHUK: I first got involved with Shrunken Shakespeare last year when I played Edmund in a reading of an adaptation of 'King Lear' written by and starring Paul Sorvino.

DANYA: Yvonne Cone came to see one of the first shows I directed in New York, and she kept in touch afterwards. Chuk and I had worked on Shakespeare together at Theatre for a New Audience.

TR: What about this piece makes it relevant to a modern audience?

DANYA: Ira Aldridge changed the way theater is performed, not just in England but around the world. He ignored the noise, kept his head down, and pushed through doubt and countless rejections. Through revealing the personal, human struggle of this monumental man, Chuk reveals the magical alchemy of making your way towards success in an unfriendly world.

CHUK: I think any audience will understand the themes in this piece. Love, fear, ambition, jealousy, perseverance, forgiveness... They are themes that cut across every demographic. I think what makes this interesting as a piece is that although set in early to mid nineteenth century, it still reads very relevant to today. But I couldn't begin to guess what people would or should take away from this. In fact, I would love to be surprised.

TR: Why should people come see this show?

DANYA: We've got some of New York's best actors all in a room together, reading a gorgeous script out loud for the first time. Something special is going to happen in the room on June 8th.

ADAM: The evening is going to be a blast. Live theatre, live performance is unpredictable and I love that.

CHUK: Any theatre company that keeps going in this city needs to be applauded. It's the extraordinary refusal to lay down that drives this city. It's embodied in the unflinching ambition and front footedness of this company. Between the day job and the auditions and the other gigs, Yvonne and Jennifer produce their own plays, events like this, and still look forward to developing the artists and audience of the future. I think that that needs to be applauded and sustained in equal measure. 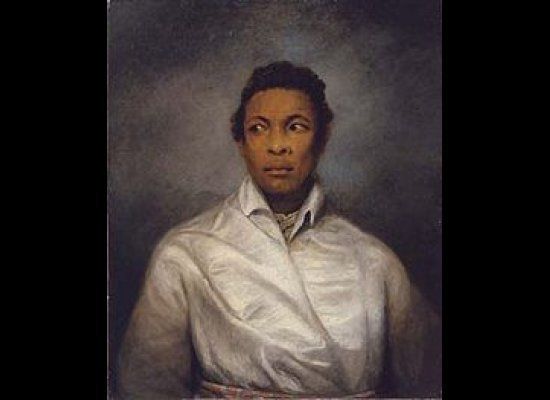 1 / 11
Ira Aldridge
Ira Aldridge was the first African-American to grace the London stage. Chukwudi Iwuji, the writer of this world premiere, sees many parallels between himself and the career of Aldridge.