The 55th annual jury of the World Press Photo contest selected Aranda's photograph of a woman consoling an injured male relative in Yemen as 2011's photo of the year. The woman is covered almost entirely by her burqa, by exception of small parts of her face and arms. Aranda took the photograph in a Sanaa mosque that was being used as a hospital by demonstrators protesting against Yemen's President Ali Abdullah Saleh.

The Times' Lens blog described the winning photograph as having the "mood of a Renaissance painting." The photograph was taken early into Aranda's two-month assignment in Yemen. "The woman is not just crying. It was something more. You can feel that the woman is really strong," Aranda said of the female subject in his photograph.

The World Press Photo competition is one of the most famous competitions for photojournalists in the world. The award-winning photographs are made into a traveling exhibition, which visits 45 countries over the course of the year. Click over to the World Press Photo website to view all the winners and exhibit schedule. 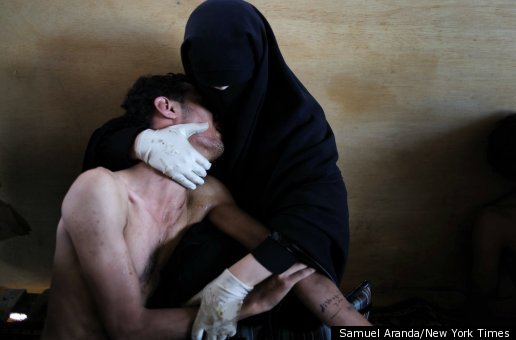