"Mom, relax. Take it easy." That was my son's mantra. He was always telling me to "chill" or "live in the moment." Five years later Daniel's words still resonate, especially on the harder days.

We lost our son to suicide in 2009. He had left our home in the morning to go up to our cottage and was expected back for dinner. He never made it home. Daniel had spent his last day talking to friends. Talking to his dad. And talking to me about what we'd have for dinner. He was in the fight of his life, but none of us knew it. The next day we would learn that our son had taken his life at our cottage.

In the days that followed our son's suicide we functioned, but barely. Carrying out our duties in a desperate effort to honor our son's life. We went north to our cottage to perform a Smudge Ceremony, which is said to purify the mind, body and spirit. Our first step toward healing, but it all began to feel so futile. No matter what we did, nothing was going to change our reality. When my husband went back to work and our girls went back to school I decided to go in search of answers. I needed to understand his emotional and physical pain. I needed to understand the contributing factors in his depression and suicide. When I became overwhelmed with the research and exhausted from the writing I'd summoned his voice. "Mom, take a break. Don't work so hard."

On National Suicide Awareness Day in 2009 (as it was called then) my essay, "Mourning Our Two Daniels," was published. In the essay I recounted the aftermath of our son's suicide and reflected on our new life without Daniel.

As a survivor of suicide I feel that it is our time to lead the conversation around suicide prevention. Those of us who have been impacted by suicide have a unique perspective, to put it mildly. We have information we need to share. We hope that even a small part of our experience will be of value to someone else.

It is also time for a new vocabulary when reporting on suicide. As a survivor I felt that some of the media coverage around Robin William's suicide was disturbing. I can imagine the aftermath. Publicizing graphic details about the comedian's death further traumatizes those left behind by suicide. This very public tragedy has reminded me that there is still much work to do but also inspired me to reach out to others on social media to share what they've learned through their own lived experiences.

In five years so much has changed. Daniel would not recognize the world he left on that late spring day. In 2009 our family had no understanding that our 23-year-old son was living with depression. His disease left him unable to concentrate -- and the self-loathing, crippling. Five years ago we did not talk about depression and disorders of the brain, much less suicide. Today, we generally accept that mental illness is a disease and not a flaw in one's character. We now have important discussions with our kids about the pressures they will face at university, college and life. We are more aware of the multitude of factors in depression and acknowledge that there is never one reason in suicide. Many of us who have experienced a loss by suicide work every day trying to reduce the stigma associated with mental illness.

Five years later #WSPD14 is not just a tweet-able acronym but a day set aside to recognize a growing movement of people willing to be the change. Schools are advocating for mental health literacy in their curriculum. Celebrities are speaking out about their experiences. Mental health organizations, government agencies and corporations are combining their social currency and resources in support of mental health awareness. We hope the upside of this awareness is that people will seek support -- will feel less stigmatized to share their disease.

I write in my book that everybody who knew Daniel was as shocked by his suicide as we were. None of us knew the other Daniel, particularly in the last few months of his life. Changes in brain functioning, chronic health conditions, and alcohol contributed to our son's bouts of mania and depression. Time and hindsight have allowed us to understand our son's emotional and physical pain, and although we were unable to prevent his suicide I do know that Daniel's story has resonated with many and initiated life saving dialogue. In the lead up to World Suicide Prevention Day on Sept. 10, 2014, I encourage you to take time to educate yourself about depression and contributing factors in suicide ideation and suicide. Have those important conversations that I wish I'd had with my son.

Even as I write these words I hear Daniel's calming voice in my head. "Mom, relax, enjoy the moment!" 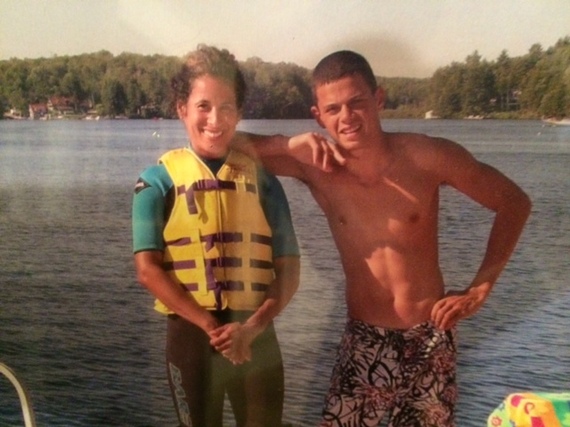