Whoever wins the Billabong Pipe Masters this week -- Gabriel Medina, Mick Fanning or Kelly Slater -- will be the last man to ever win the Association of Surfing Professionals Men’s World Championship.

That’s because, come Jan. 1, the ASP -- the premier league for international professional surfing -- will officially rebrand to the World Surf League.

“We believe the new name is easier to understand,” ASP CEO Paul Speaker announced in an open letter in September, “and gets us on a better track to serve our fans, athletes and partners, and to grow the great sport of professional surfing worldwide.”

Growing the sport is Speaker’s main goal. While surfing has long been a cult sport, best suited for those who live near the ocean, the ASP wants to take it mainstream by targeting the landlocked masses and appealing to them in new and creative ways.

“The ultimate goal,” Speaker told The Huffington Post, “is that we can deliver a world-class sporting and entertainment product direct-to-consumer in real time.”

In other words, it seems he thinks the WSL could be the NFL of surfing.

A screenshot of ASP's live coverage of Day 2 in the Billabong Pipe Masters 2014.

This season, the league invested in professional photography and debuted slick graphics, animation and other broadcast changes -- from the ESPN-like commentator tables, to the live streamed Olympic-style sportscasting.

These elements likely stem from Speaker's experience as the NFL’s director of marketing and ideas where, from 1995 until 2005, he was responsible for overseeing the NFL’s fan base, creative elements and its image in pop culture. He took the helm at the ASP after it was bought in 2012 and quickly secured a distribution arrangement with ESPN and ABC to introduce surfing to more Americans.

“The athleticism, adventure and competitive drama of the sport,” Speaker says, “is unlike anything I have ever seen,” and by reaching as many consumers as possible, Speaker hopes to “engage, educate and entertain” a whole new audience.

But inherent in the sport are serious hurdles to achieving mainstream success. According to Zach Weisberg, the founding editor of surfing website The Inertia, those behind professional surfing have to rethink how the sport is delivered to its audience.

“There are challenges,” Weisberg told HuffPost, “such as lulls that sometimes last 15 minutes where people are just sitting in the ocean. It’s a matter of really honing in on what that packaging looks like and figuring out what’s most palatable to a wider audience. That will always be a struggle.”

ASP’s vice president of communications, Dave Prodan, told HuffPost the ASP is well aware of the fact that “the ocean is the most dynamic field of play in all of sports” and “setting aside broadcast time on a network is challenging.”

He says the WSL will focus more on athletes' stories, rather than play-by-plays at heats. “We need to do a better job of telling the story of the athletes and providing a better context for the fans. Fans can get involved in a personal story or biography. Once they are invested, they can then tune in on a time delay if they’re in a different time zone, and champion our athletes outside of the water, outside of the jersey.”

But if professional surfing’s future relies on the sport itself taking a backseat to the athletes, not everyone is stoked about the changes. For purists, a big concern is how the WSL might contribute to a deeper corporatization of an industry where the celebrity-status and money-earning individuals thrive.

Most recently, at Surfer Magazine’s Surfer Poll awards ceremony, surfer Noa Deane went off on the proposed changes. “Fuck the WSL,” he said while accepting the award for Best Surf Film. He later apologized, writing, “My only goal was to raise the point of surfing not becoming a corporate sport like football but I can see and acknowledge how I came across and I am sorry.”

According to Weisberg, free surfing and competitive surfing will always be at odds. “Surfers, as a bunch, are an apprehensive group,” he says. “Some use the sport as a spiritual experience that borders on religion.”

Unlike more accessible sports like football or golf, that experience may be difficult to communicate to a non-surfing audience. If the WSL succeeds in attracting a mainstream audience, it's likely that only a small percentage of viewers will have experienced the rush of surfing themselves.

It's Not All About The Men

Three-time ASP Women’s World Champion Carissa Moore expressed similar concerns about surfing losing a certain integral essence. “I don’t want to lose what’s so special about surfing, which is surfing in the ocean. Feeling the unpredictability of the ocean is so special to the sport,” she told The Huffington Post.

Overall though, Moore is optimistic about surfing’s future with ASP/WSL, especially because the league promises more respect for women’s surfing. The league now ensures prize money and broadcast quality parity and has increased the number of women’s events. It gave women the chance to choose the best days to surf when sharing a competition with men. 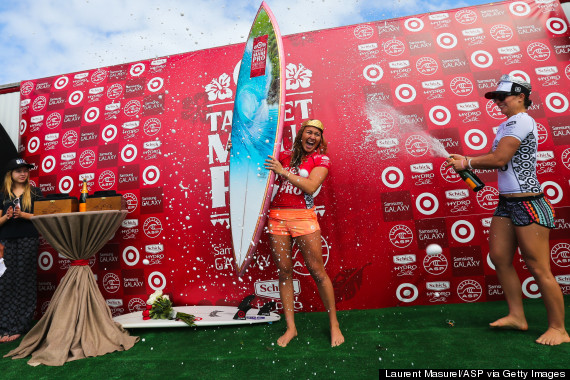 Carissa Moore on the podium for the Target Maui Pro at Honolua Bay.

“We’ve sometimes even gotten the upper hand in getting the better waves, which is so good, because in past they would never listen to us,” she said. “And so that’s been huge, just seeing the different venues that they’ve added to the tour this year. It makes me feel like they believe in us.”

Prodan called the investment in women’s surfing an “If you build it, they will come” situation and said the women are an especially big draw for the WSL’s story-telling aspect. The athletes, he says, are “all very interesting people, especially on the women's side. We need to do a better job of telling the story of the athletes, providing a better context for the fans.”

Working in the WSL’s favor, Prodan says, is the power of the Internet. Since webcasting is the main artery through which it delivers content, the WSL plans on doubling down and investing in the production quality of its proprietary content. Moving forward into 2015, Prodan says, “tailoring the social experience to the fan” will be the priority.

“If you’re a fan in South Africa,” Prodan said, “you may receive social alerts or SMS alerts every time Jordy [Smith] is going to surf. And you can tweak your work or school schedule around where you want to watch your surfers.”

So far, the strategy seems to be working. In August, 12 million people logged on to watch the Billabong Tahiti Pro -- “a major uptick in audience figures,” according to Prodan.

And the Pipe Masters -- surfing’s premier event -- which unfolds on Oahu’s North Shore this week, could bring the ASP even higher ratings, buoyed by the league's more than 1.6 million Facebook fans and 230,000-plus YouTube subscribers.

As the world’s best surfers line up to charge one of the world’s biggest waves this year, many of them may realize that the sport they love is at a precipice of its own. And nobody really knows what’s on the other side.