Sword swallowing is 4,000 years old -- and it's still cutting edge.

"It's one form of entertainment that can't be dated," sword swallower Dan Meyer told The Huffington Post. "It's been 4,000 years of doing the impossible."

"We have 42 confirmed, and there are two people who may attempt to swallow their first sword in public," he said. "The high point is at 2:22:14 local time, when all the sword swallowers swallow their blades simultaneously."

Sword swallowing is so difficult that there are only a few dozen professional sword swallowers in the world. It's a small amount, but a big increase since Meyer went pro in 1997.

"There were less than a dozen back then," he said. "It's growing."

And getting younger. Earlier this year, 15-year-old Haley Hall became the youngest member of the Sword Swallowers Association International, of which Meyer is the president.

She's one of the reasons why Meyer created World Sword Swallowers Day eight years ago.

Usually, sword swallowers work alone, but World Sword Swallowers Day gives blade biters a chance to see each other work and attempt to impress each other.

"One guy is going to attempt to swallow a sword while between two beds of nails," said Meyer, who plans to drop seven swords down his gullet at once at the Ripley's Odditorium in St. Augustine, Fla.

Last year, he swallowed a sword and then pulled a car out of the Ripley's showroom.

Brett Loudermilk, who will be performing at Ripley's Los Angeles location, said sword swallowing is "the Holy Grail of sideshow acts."

"The key is that you're making people want to watch something that is inherently unwatchable," he told HuffPost.

In honor of the day, he made a satirical instructional video on how to swallow a sword that he says is "completely deceptive."

WATCH: HOW (NOT) TO SWALLOW A SWORD (Story continues below)

The entertainment aspect of sword swallowing is important, but Meyer also said the day is supposed to focus attention on the other contributions they have made to science and medicine.

For instance, in 1868, a sword swallower assisted Dr. Adolf Kussmaul in Freiburg, Germany, in developing the first rigid endoscopy. Another sword swallower underwent the first esophageal electrocardiogram in Wales in 1906.

In both cases, the researchers got the credit, but the sword swallowers' names disappeared down the esophagus of time, and Meyer just doesn't think that's right. "Sword swallowers go unrecognized, but their physical and mental abilities to shut off bodily reflexes is very helpful to scientists studying the inner workings of the body," he told HuffPost in 2012.

Loudermilk, who learned to swallow swords via long distance phone calls with esteemed sword swallower Todd Robbins, says swallowing is something that steel slurpers like him take very seriously.

"Whenever I eat, I always feel the food and know where it is until it gets to my stomach," he said. "I can follow the path with my finger." 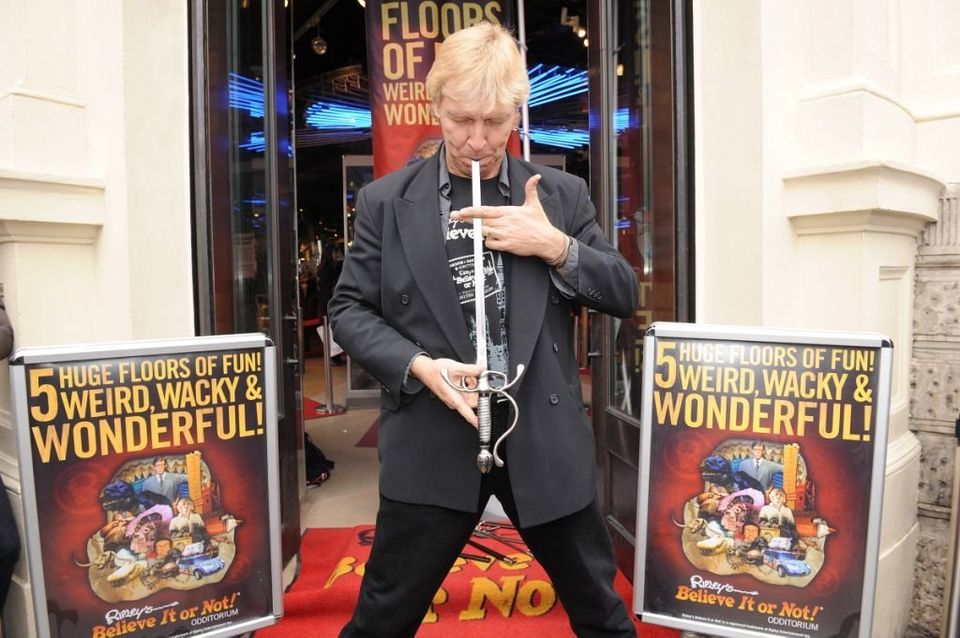