In July 2010, amid the gargantuan rebuilding effort at the site of the World Trade Center in Lower Manhattan, construction workers halted the backhoes when they uncovered something unexpected just south of where the Twin Towers once stood.

At 22 feet (6.7 meters) below today's street level, in a pit that would become an underground security and parking complex, excavators found the mangled skeleton of a long-forgotten wooden ship.

Now, a new report finds that tree rings in those waterlogged ribs show the vessel was likely built in 1773, or soon after, in a small shipyard near Philadelphia. What's more, the ship was perhaps made from the same kind of white oak trees used to build parts of Independence Hall, where the Declaration of Independence and U.S. Constitution were signed, according to the study published this month in the journal Tree-Ring Research. [See Photos of the Ship and Its Tree Rings] 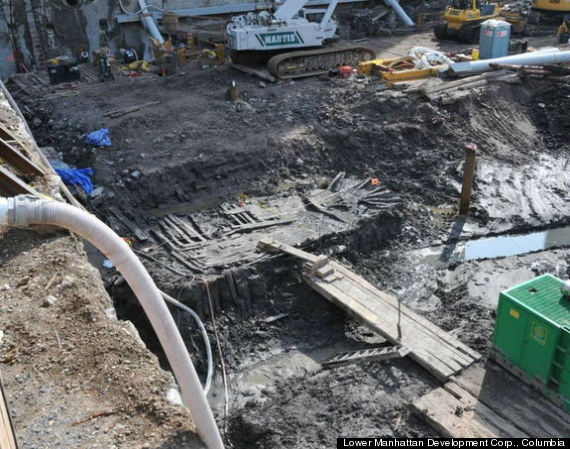 Four years after a shipwreck was revealed at Ground Zero, a new report details how tree rings helped establish the origins of the wooden vessel.

Archaeologists had been on-site throughout the excavation of the World Trade Center's Vehicular Security Center. They had found animal bones, ceramic dishes, bottles and dozens of shoes, but the excitement really kicked up when the 32-foot-long (9.75 m) partial hull of the ship emerged from the dirt.

The vessel was quickly excavated, to prevent damage from exposure to the air. Piece by piece, the delicate oak fragments were documented and taken out of the rotten-smelling mud. The timbers were sent to the Maryland Archaeological Conservation Laboratory, where they would be soaked in water to keep the wood from cracking and warping.

A few timbers were sent back to New York, just 20 miles (32 kilometers) north of the World Trade Center, to the Tree Ring Laboratory at Columbia University's Lamont-Doherty Earth Observatory in Palisades, New York. Researchers at the lab dried the fragments slowly in a cold room and cut thick slices of the wood to get a clear look at the tree rings. 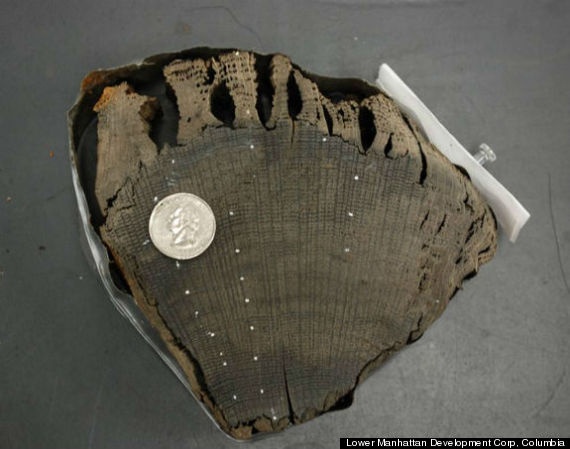 Rings in the white oak timbers used to build the ship reveal that the vessel was built around 1773 near Philadelphia.

The team established that the trees used to build the ship — some of which had lived to be more than 100 years old — were mostly cut down around 1773. Then, to determine where the wood came from, the researchers had to find a match between the ring pattern in the timbers and a ring pattern in live trees and archaeological samples from a specific region.

"What makes the tree-ring patterns in a certain region look very similar, in general, is climate," said the leader of the new study, Dario Martin-Benito, who is now a postdoctoral fellow at the Swiss Federal Institute of Technology (ETH) in Zurich. Regional ring patterns arise from local rain levels and temperatures, with wetter periods producing thicker rings and drier periods producing smaller rings, he said.

Martin-Benito and his colleagues at Columbia's Tree Ring Lab narrowed their search to trees in the eastern United States, thanks to the keel of the ship, which contained hickory, a tree found only in eastern North America and eastern Asia. Otherwise, the researchers would have had much more difficulty in limiting their search, as oak is found all over the world. [Shipwrecks Gallery: Secrets of the Deep]

The ship's signature pattern most closely matched with the rings found in old living trees and historic wood samples from the Philadelphia area, including a sample taken during an earlier study from Independence Hall, which was built between 1732 and 1756.

"We could see that at that time in Philadelphia, there were still a lot of old-growth forests, and [they were] being logged for shipbuilding and building Independence Hall," Martin-Benito told Live Science. "Philadelphia was one of the most — if not the most — important shipbuilding cities in the U.S. at the time. And they had plenty of wood so it made lots of sense that the wood could come from there."

Historians still aren't certain whether the ship sank accidently or if it was purposely submerged to become part of a landfill used to bulk up Lower Manhattan's coastline. Oysters found fixed to the ship's hull suggest it at least languished in the water for some time before being buried by layers of trash and dirt.

Previous investigations found that the vessel's timbers had been damaged by burrowing holes of Lyrodus pedicellatus, a type of "shipworm" typically found in high-salinity, warm waters — a sign that the ship, at some point in its life, made a trip to the Caribbean, perhaps on a trading voyage. Martin-Benito speculated that the infestation might have been one of the reasons the ship met its demise just 20 or 30 years after it was built.

"I don't know much about the life expectancy for boats, but that doesn't seem like too long for something that would take so long to build," Martin-Benito said.

Advertisement
Copyright 2014 LiveScience, a TechMediaNetwork company. All rights reserved. This material may not be published, broadcast, rewritten or redistributed.
Download
Calling all HuffPost superfans!
Sign up for membership to become a founding member and help shape HuffPost's next chapter
Join HuffPost