According to Vintage Wings, a Canadian aviation news website, Jakub Perka, who works for an oil company, came across the Kittyhawk P-40 in March when his team was on an expedition in the Egyptian desert.

As the photos below show, the plane is in remarkably good condition, with the cockpit's instrument panel and plane's body nearly unharmed despite almost seven decades in the Sahara.

"It is a quite incredible time capsule, the aviation equivalent of Tutankhamun's Tomb," said Andy Saunders, a UK-based historian, according to the Daily Mail.

According to the press agency Bournemouth News & Picture Service, the pilot is thought to have been Flight Sergeant Dennis Copping, who was 24-years-old at the time of the crash.

Saunders speculated that Copping survived the crash because a parachute was found near the airplane. "[My] guess is the poor bloke used it to shelter from the sun," Saunders said, according to The Daily Mail.

"If he died at the side of the plane his remains would have been found," he added, according to The Mail. "Once he had crashed there, nobody was going to come and get him. It is more likely he tried to walk out of the desert but ended up walking to his death. It is too hideous to contemplate."

Metro reports that Copping belonged to the RAF’s 260 Squadron that was based in Egypt during a campaign against German General Field Marshal Erwin Rommel. According to the paper, Copping "had been told to fly two damaged Kittyhawk P-40 planes from one British airbase in northern Egypt to another for repairs" when he lost his way and crashed during the flight.

According to the Telegraph, the Egyptian military recently removed ammunition and guns from the single-engine airplane. In a video posted to YouTube, available below, men in camouflage can be seen removing ammunition from the aircraft.

According to the Smithsonian Institution's National Air and Space Museum, there were 13,737 Curtis P-40's built between 1939 and 1944. The model found in the Sahara, a P-40E, had six .50 caliber machine guns mounted on the wings. The single-engine airplanes had only one crew member.

Click over to Perka's Picasa page to see more photos, and read the article from The Daily Mail to find out about what's going to be done with the aircraft now that it's been found. 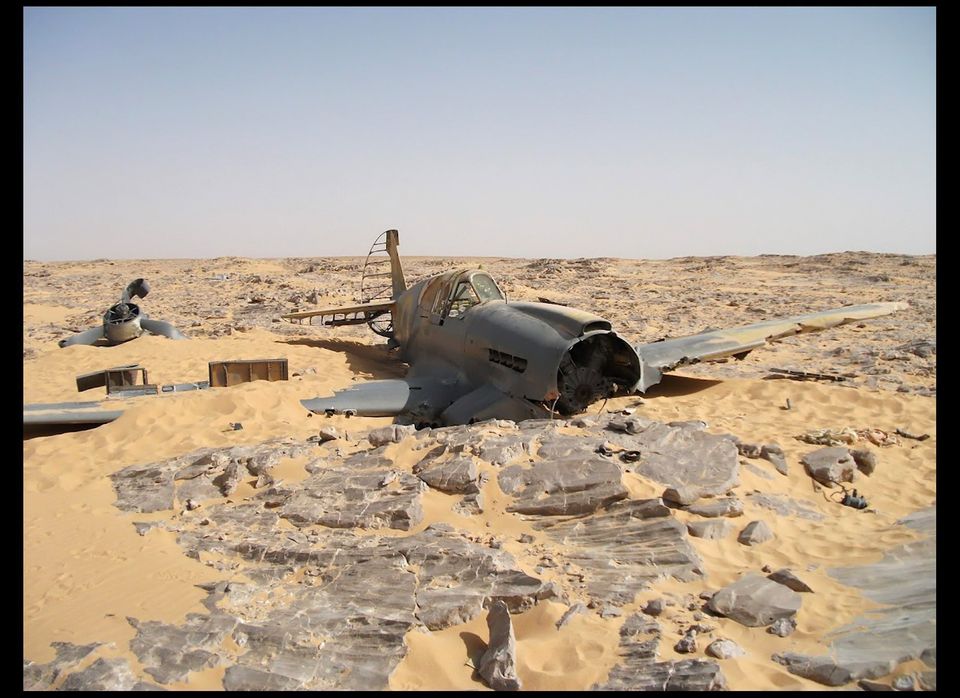 1 / 6
WWII Plane Discovered Preserved In Sahara Desert
A World War II plane a British pilot crashed in the Saharan Desert has been found frozen in time 70 years later. The Kittyhawk P-40 is an aviation time capsule that has remained unseen and untouched since it crash-landed in June 1942. It is thought the pilot, believed to have been Flight Sergeant Dennis Copping (24), survived the crash and initially used his parachute for shelter before making a desperate and futile attempt to reach civilisation by walking out of the desert, 200 miles to the nearest town. The single-seater aircraft was discovered by chance by a Polish oil company worker exploring a remote region of the Western Desert in Egypt.
Jakub Perka, BNPS.co.uk