"But this -- we got a leader in Iran who has announced that he wants to destroy Israel. So I've told people that if you're interested in avoiding [grinning] World War III [end grinning], it seems like you [begin giggling] ought to be interested in preventing them from have the knowledge [end giggling] necessary to make a nuclear weapon." 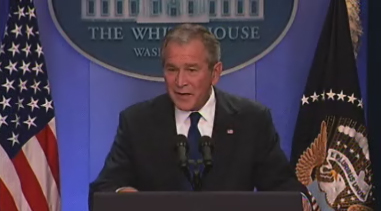 To the rest of the known world, however, World War III a scary thing. It's just below abortion and above rape on the list of the all time unfunniest topics.

Let's break it down.

1. Iran doesn't have a nuclear weapon, and if they ever developed one, they'd be smart enough to know (despite how we caricaturize Ahmadinejad) that using it would invite their own destruction a thousand times over. Thus, there is no Iranian nuclear threat.

2. Yet the administration is drawing up plans to illegally and preemptively attack anyway, based on the lie that Iran is a nuclear threat.

3. Congress, despite the president's 24-percent approval rating, won't stop the White House because of, 1) The Fear, and 2) because Congress has allowed the president and vice president to seize unprecedented power which almost entirely circumvents Article I of the Constitution (among other things).

4. Meanwhile, if we do attack, it appears as if Pooty-Poot might bring Russia in on the Iranian side.

5. And there you go. Knee slapping boners all around. Milk just came out of my nose.

They're marketing Iran with more psychotic voracity than Michelle Malkin attacking an injured baby -- and no one can stop them.

As near as I can tell, there doesn't appear to be a governing body or citizen group who can stop them from carrying this out. Congress won't and, honestly, they can't. Last night's Frontline episode, "Cheney's Law," underscored what we've all been worried about: Congress has been rendered ineffectual against the current power madness of the executive.

For example, has Congress clamped down on the president's rampant use of torture? Sure. (Torture is number five on the unfunny syllabus.) The Republican controlled Congress did this, but the president rendered the law pointless with a signing statement.

Ah yes. Torture. Not to digress too far into this thing, but you know how the president can look us in the eye and say, "we don't torture," as he did in today's press conference? He can say this with impunity because the administration has authored its own definition of torture which is so narrow that anything else -- anything you and I would consider to be torture -- isn't.

If it don't cause organ failure, it ain't torture, Stretchy McStretch-o-rama-funny-pants. In a sense, the president isn't lying when he says "we don't torture." It depends on what your definition of torture is.

This excuse, of course, is the same excuse future enemies will use when they torture... us.

Republican cowards who demand security at the expense of liberty/honor/law have facilitated the Bush executive branch with extraordinary power. Now we're trapped in the shadow of the White House's unprecedented strength, and there doesn't appear to be any conceivable way to stop these people. If Cheney wrangles the military hardware to attack Iran, the air strikes will commence with lightning zealotry. Bet on it. Congress can try to stop him, but they don't have the power any more. According to the Bush administration, Article II is Article II and the Commander in Chief rules.

It's as simple as that. Just try telling him he's wrong on this. You could be the most conservative wingnut ever and you'd lose that debate -- not for a lack of rational arguments either.

Is it any wonder why we occasionally succumb to outrage fatigue: that deflated, windless sense of numbing futility we feel when confronted with the illogical and the absurd? We've only begun to dig into the upper strata of lawlessness this regime has perpetrated over the last seven years. And now, in this desperate dying twilight of their existence -- now that they're gravely unpopular and on their way out the door -- reckless and without anything to lose -- why shouldn't they do all the crazy shit they've talked about? Bomb Tehran? Yeah, that'll be awesome and hilarious. More war means more war powers. If you thought the administration's war powers were crazy huge, just imagine their World War powers. Score!

The president always says that history will vindicate him. 15 months from now, he'll be done. Pretending to be a cowboy down there -- raising melanomas in the harsh Crawford sunshine, laughing at the third hilarious war he started all by himself.

Once he's done, by his twisted reasoning, it's someone else's problem. By "someone else" he naturally means "everyone else."

Just like so many powerful men, he appears to be able to switch off his conscience (if one exists in the first place). It's the same switch that allows him to say "we don't torture," or to smirk and laugh while discussing Iraq casualties and World War III. "Everyone else" won't include him because he'll always be safe. He'll always have Crawford and the twins; his fake accent and his delusional view of history; his nicknames and his eh-eh-eh laugh.

The rest of us -- unless we can find a way to stop this Iran drumbeat -- won't be laughing so much.