It's all too easy to think of anything counted in the millions as an abstraction -- even if it's World War II, and the topic at hand is the millions of lives lost.

That's what makes "The Fallen of World War II," a short visualization by filmmaker Neil Halloran, so impactful. The 18-minute long video, released on Memorial Day, breaks down the war's tragedies with a deeply engaging look at the shocking number of people who died, where they came from and how they lost their lives.

Watch the video in full, above. Half a million German Army soldiers died in the (failed) battle of Stalingrad alone, with another 100,000 taken prisoner. But for the USSR, victory came at an even steeper price, as the Soviets lost nearly twice as many soldiers as the Nazis in that battle alone.

In all, at least 8.7 million Soviet soldiers died in World War II (Halloran notes that some estimates place the tally as high as 14 million). That number becomes all the more eye-popping when compared to the losses incurred by other countries. In the screengrab below, Soviet losses, in red on the far right, are compared with deaths suffered by the Nazis in yellow, the U.S. in white, the U.K. in blue and Yugoslavia in purple: 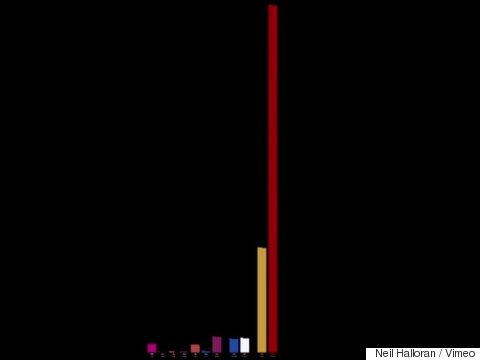 The video accounts for deaths of both soldiers and civilians, and then puts those figures into context relative to wars that came before and after. "More people died in World War II than in any other war in history," Halloran reminds viewers.

He then drives home that point with comparisons to the numbers killed in World War I, by Mao and Stalin, and in other major conflicts. The chart below compares the deaths suffered during World War II to those of subsequent wars:

A more interactive version of the project is visible on the film's website, where donations can also be made in support of Halloran's efforts.

A reference to German Army soldiers has been updated to reflect that not all were Nazi party members.