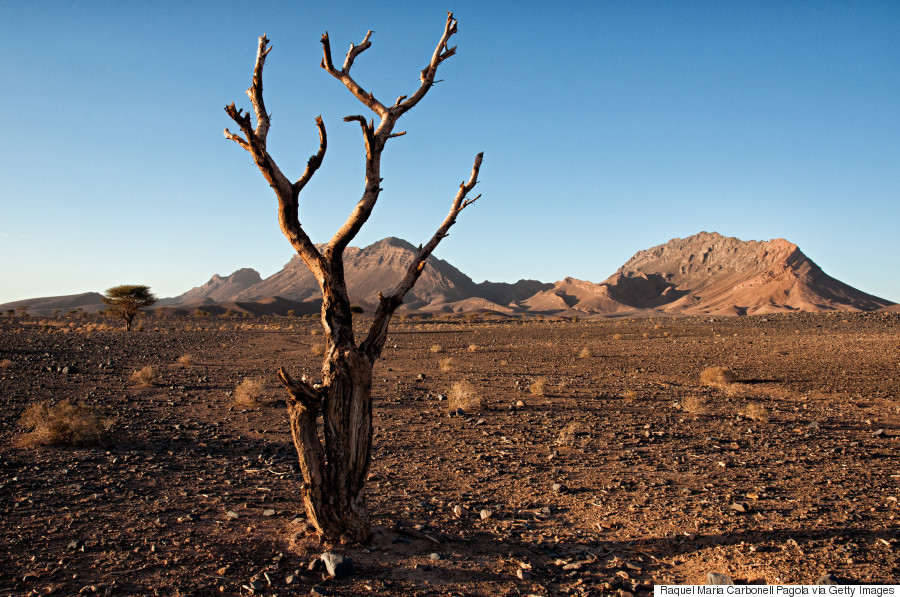 This is the second installment of a five-part WorldPost series on the world beyond 2050. The series is adapted from the Nierenberg Prize Lecture by Lord Martin Rees in La Jolla, Calif. Part one is available here. Part three will be published next week.

The world will gradually get warmer. In contrast to population issues -- the subject of last week's "Beyond 2050" essay -- climate change is certainly not under-discussed.

But it's still unclear how much the warming due to carbon dioxide itself is amplified by associated changes in water vapor and clouds. The fifth Intergovernmental Panel on Climate Change report presents a spread of projections.

But despite the uncertainty, there are two messages that most scientists would agree on:

1. Regional disruptions to weather patterns within the next 20-30 years will aggravate pressures on food and water and engender migration.

2. Under a "business as usual" scenario we can't rule out really catastrophic warming arriving later in the century and tipping points triggering catastrophes -- like the melting of Greenland's icecap.

But even those who accept both these statements have widely diverse views on the policy responses. And I don't think it's fully appreciated that these divergences stem less from differences about the science than from differences in economics and ethics -- in particular, in how much obligation we should feel towards future generations.

Economists who apply a standard discount rate, a method for calculating the possible economic consequences of future climate change, are in effect writing off what happens beyond 2050 -- so unsurprisingly they downplay the priority of addressing climate change in comparison with shorter-term efforts to help the world's poor. 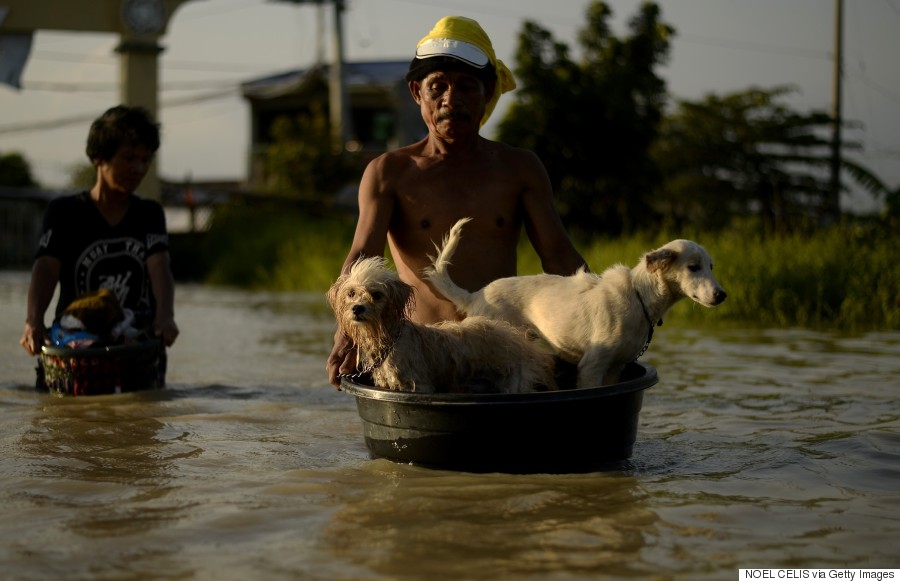 A man evacuates his pet dogs in Bulacan province in the Philippines after a ferocious typhoon hit in October 2015. (NOEL CELIS/AFP/Getty Images)

But if you care about those who'll live into the 22nd century and beyond, then you deem it worthwhile to pay an insurance premium now in order to protect future generations against worst-case scenarios.

So, even those who agree that there's a significant risk of climate catastrophe a century hence will differ in how urgently they advocate action today. Their assessment will depend on expectations of future growth and optimism about technological fixes. But above all, it depends on an ethical issue -- in optimizing people's life chances, should we discriminate on grounds of date of birth?

Consider this analogy. Suppose astronomers had tracked an asteroid and calculated that it would hit the Earth in 2080, 64 years from now -- not with certainty, but with, say, a 10 percent probability. Would we relax and say that it's a problem that can be set aside for half a century? People will then be richer, we'd say, and it may turn out then that it's going to miss the Earth anyway? I don't think we would. There would surely be a consensus that we should start straight away and do our damnedest to find ways to deflect it or mitigate its effects.

What will actually happen on the climate policy front? The pledges made at the Paris conference are a positive step. But even if they're honored, CO2 concentrations will rise steadily throughout the next 20 years. (There's an excellent new report from the University of San Diego called "Bending the Curve" that suggests how this rising curve can be turned around). 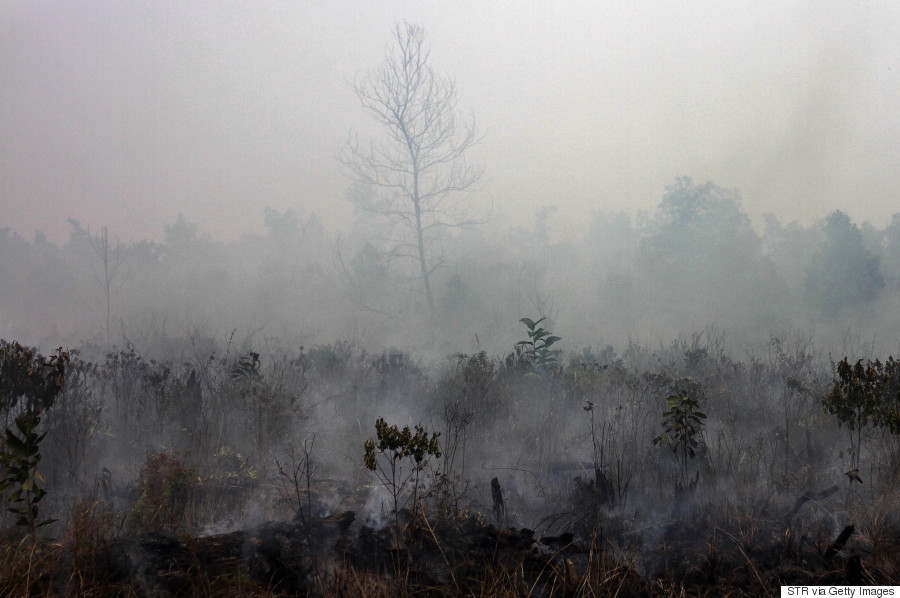 Smoke rises from a peatland fire in Riau province on Indonesia's Sumatra island. Indonesia is one of the world's biggest carbon emitters because of rampant deforestation. (STR/AFP/Getty Images)

But by then we'll know with far more confidence -- from a longer time base of data and from better modeling -- just how strong the feedback from water vapor and clouds actually is. If the so-called climate sensitivity is low, we'll relax. But if it's large, and the climate consequently seems to be on an irreversible trajectory into dangerous territory, there may then be a pressure for panic measures. This could involve a plan B -- being fatalistic about continuing dependence on fossil fuels but combating its effects by either a massive investment in carbon capture and storage or else by geoengineering.

It's feasible to inject enough aerosols into the stratosphere to cool the world's climate. Indeed, what is scary is that this might be within the resources of a single nation, or even a single corporation. But there could be unintended side effects. Moreover, the warming would return with a vengeance if the countermeasures were ever discontinued, and other consequences of rising CO2 -- especially the deleterious effects of ocean acidification -- would be unchecked.

Geoengineering would be a political nightmare. Not all nations would want to adjust the thermostat the same way. Very elaborate climatic modeling would be needed in order to calculate the regional impacts of an artificial intervention. The only beneficiaries would be lawyers. They'd have a bonanza if nations could litigate over bad weather!

I think it's prudent to explore geoengineering techniques enough to clarify which options make sense, and perhaps damp down undue optimism about a technical quick fix for the climate. 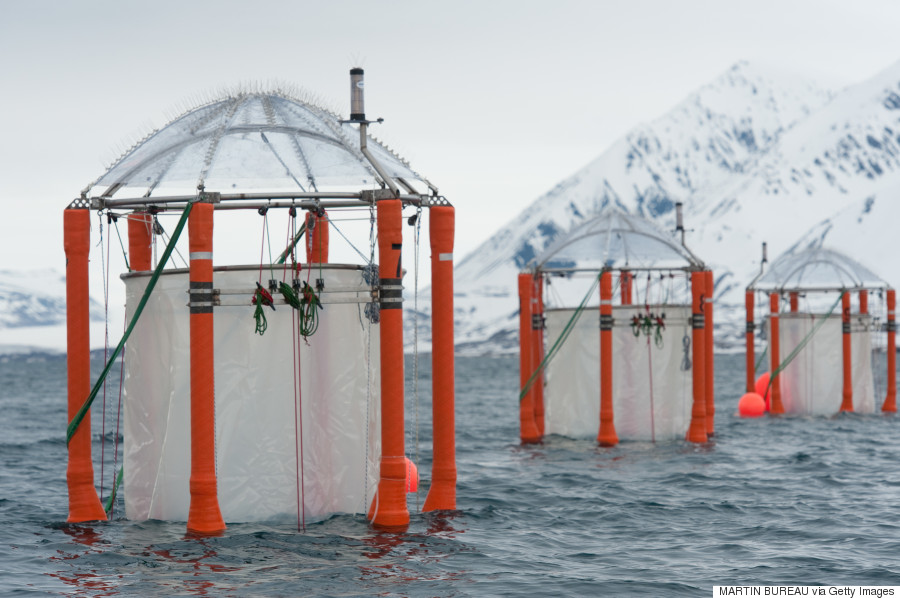 Large floating contraptions, used by scientists to predict the acidity in the oceans, sit off the shore of the scientific outpost of Ny-Alesund, on the island of Spitsbergen in Norway. (MARTIN BUREAU/AFP/Getty Images)

Many still hope that our civilization can segue smoothly toward a low-carbon future. But politicians won't gain much resonance by advocating for a bare-bones approach that entails unwelcome lifestyle changes -- especially if the benefits are far away and decades into the future. But three measures that could mitigate climate change seem politically realistic.

First, all countries could improve energy efficiency, insulating buildings better and so forth, and thereby actually save money.

Second, we could target cuts to methane, black carbon and chlorofluorocarbon emissions. These are subsidiary contributors to long-term warming, but unlike CO2 they cause local pollution too -- in Chinese cities, for instance -- so there's a stronger incentive to reduce them.

Third, nations should expand research and development into all forms of low-carbon energy generation -- renewables, fourth generation nuclear, fusion and the rest -- and into other technologies where parallel progress is crucial, especially smart grids and storage (batteries, compressed air, pumped storage, flywheels). That's why an encouraging outcome in Paris was an initiative called Mission Innovation, launched by President Barack Obama and endorsed by more than a dozen nations, including the world's most populous and industrialized countries. It's hoped they'll pledge to double their publicly funded R&D into clean energy by 2020 and to coordinate efforts. There's a parallel pledge by Bill Gates and other philanthropists. 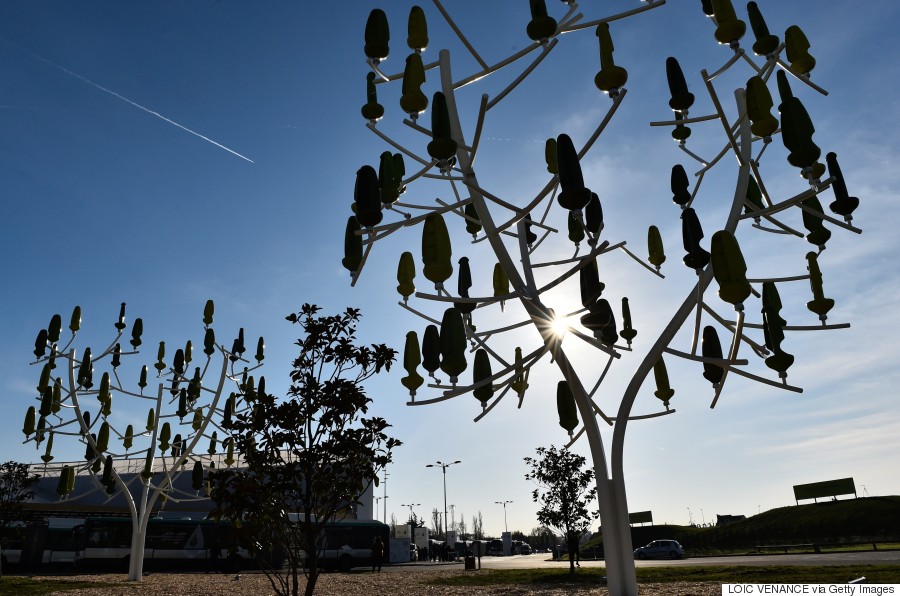 "Wind trees," a renewable energy innovation constructed in the shape of a tree, where each "leaf" acts as a mini wind-turbine to generate electricity, displayed at the COP21 on the outskirts of Paris. (LOIC VENANCE/AFP/Getty Images)

This target is a modest one. Presently, only a small percentage of publicly funded R&D is devoted to these challenges. Why shouldn't the percentage be comparable to spending on medical or defense research?

The faster these clean technologies advance, the sooner they will become affordable to developing countries, where more generating capacity will be needed and where there would otherwise be pressure to build coal-fired power stations.

All renewables have their niches, but an attractive scenario for Europe would be large-scale solar energy coupled with a transcontinental smart grid network (north-south to transmit power from Spain or even Morocco to the less sunny north, and east-west to smooth over peak demand in different time zones). Plus efficient storage as well of course.

It would be hard to think of a more inspiring challenge for young engineers than devising clean energy systems for the world -- to replace fossil fuel globally and to bring local benefits to the billion people whose health is jeopardized by smoky stoves burning wood or dung.

Of course the unique difficulty of motivating efforts to cut CO2 is that that the impact of any action not only lies decades ahead, but is also globally diffused and brings no special benefit to the actor. In contrast, for most politicians the immediate trumps the long term and the local trumps the global. So climate issues slip down the agenda unless there's continuing public concern.

And here, incidentally, the great religious faiths can be our allies. The pope's recent encyclical on the environment and climate change was hugely welcome. The Catholic Church transcends normal political divides -- there's no gainsaying its global reach or its durability and long-term vision or its focus on the world's poor. This pope's message resonated around the world, from Latin America to Africa and East Asia -- and even, perhaps, here in the United States.