Mist is rising through the forest canopy in the growing dawn in the South Indian jungle. It's barely 7 a.m. and I am driving back from a stupendously successful morning in the field observing monkeys, wild boar, various birds, and even a curious female tiger. Driving slowly, I watch the silhouettes of the jungle brighten to become trees in the growing dawn, the waking monkeys, the bird calls, when suddenly a mountainous shape charges out of the forest towards my car. Skidding to a stop, my heart in my mouth, I cannot believe what the immensity of what stands before me.
I'm face to face with a nine-foot tall female elephant.

I lean forward to see her eyes, threatening orange beads between a broad forehead and flag-flailing ears. With terrifying clarity, she lifts her head, swinging her curled trunk across the hood of my car. I am acutely aware of being at the mercy of an animal seventeen times my own weight - she could easily flip my car over and smash it to scrap metal. But she doesn't. As the initial shock wears off, and she sways menacingly back and forth just a few feet above my windshield, I realize the elephant is considering me, thinking about what she should do next.

I reverse a short distance and then put the car in park, and enjoy the complex typography of her tremendous face. It is terrifying and wonderful to be so close to a wild elephant. But after some time, she is still looking down at me, and I still have no idea what she wants, and the New Yorker in me starts to nag: I got places to go, lady. I lean out the window of my little red car, look up at her, and hit my palm against the door: "Ay! Just let me pass!" 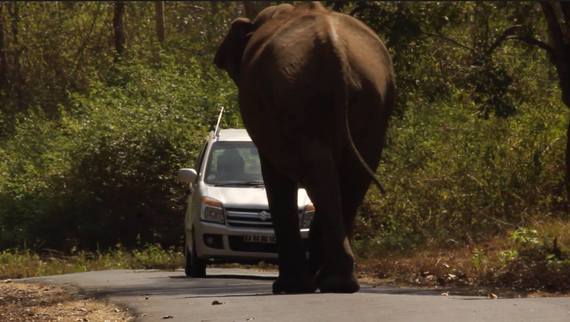 Flapping her ears and curling her trunk she advances in two huge steps, and then a third. I race to throw the car into reverse. My heart is pounding. But as she continues to advance, and I reverse, she is making it very clear that she isn't planning violence. I can see it on her face. So I start to speak calmly to her out of my window as she forces me backwards. "What's got your trunk all twisted, big girl? Why don't you let me just pass?" Although I know she won't understand English, I hope that the even, reassuring sound of my voice helps her to understand I am not a threat. I'm dying to know what she's up to.

After a while she pauses. I put the car into park again, and this time turn off the engine. The moment I do, I see the change. Her ears relax, and she suddenly seems more curious than confrontational. But it still seems like she wants something. Cautiously, I step out of the car. Her head is five times the mass of my entire body, those little eyes just meters from mine. For a while, we have an awkward conversation that neither of us fully understand. Then she turns away from me to look towards the forest. As she does, two new females materialize from the foliage. Between them, crashing through the underbrush is a calf.

She isn't just being a bully. Sheis caring for her family. In a landscape where food and forest are increasingly scarce, where there are thousands of farmers who use explosives or poison to scare or kill crop-raiding elephants, and where speeding vehicles kill vast numbers of wild animals each day - she is using the authority of her size to make sure I stay put, so that her baby can cross the road safely.

I watch as the pachyderm parade moves across the road, the adults carefully guarding the calf between them. For a moment I am lost in pure awe at the massive grace of this family of giants - the little one trundling clumsily between the others. Once they all cross the road, the massive matriarch is satisfied, and shakes her head at me before moving off and letting me pass.

Even though I spend most of my time studying or rehabilitating wildlife, that morning meeting on the road was something special. The exhilarating power, intelligence, and communication of that day would stay with me long after I met the elephant family. Months later, after having time to process, it began to make me realize that I had been failing at my job.

As someone who has come to speak for the creatures that cannot speak for themselves, when I'm not in the field amongst animals I spend much of my time arguing the contemporary utilitarian viewpoint that animals contribute to ecosystems, and ecosystems are what have made it possible for us to live (Read my essay: Why we need Wildlife). But I am increasingly confronted with the feeling that this anthropocentric functional pragmatism towards animals is also tragically miopic. It gets the science right, and illustrates that from a human perspective we do need nature. It also assumes that our species' solipsism is so complete, that we cannot even begin to consider how our actions would appear from perspective any one of the millions of other creatures on our dying planet.

Whenever I come face to face with wildlife, especially in when it is something like a family of elephants, it strikes me how we depend on euphemistic terms to soften the truth. When we learn that since 1970 half the wildlife on earth has been 'lost' or that species are 'vanishing' so rapidly that A Great Silence is Spreading Over the World, the language used in communicating these abstract ideas neglect what Dr. Jane Goodall wisely notes: "It's not just a species facing extinction, it's massive individual suffering"."

I can tell you it is not abstract at all when you see the blood on the leaves, a mother orangutan holding her baby in the ash of razed forest, or an elephant still gasping after his trunk and face and tusks have been removed by chainsaw, the drowning dolphins and millions of other fish that perish in the mountainous bycatch of industrial fishing nets each day. The brutal examples are legion, but the fact is that as so many species circle the drain of extinction, we simply haven't been able to wake up and stop the killing.

It all goes back to apathy and economics. The orangutans would be safe if demand for palm oil were not driving the destruction of their forests. Poachers would not bother killing elephants and rhinos if it were no longer possible to buy and sell products made from horn or ivory. Fish populations would rebound if we were to regulate our harvest based on ecological guidelines. Yet even with all the astounding technological advances we have, we still seem to struggle with the fundamental simplicity of not cutting down a tree. What I mean is that it is almost absurdly clear that endangered species would continue to thrive if we just stopped killing them and destroying their habitat.

So what are we missing? Perhaps it is has to do with the way we think about animals. GK Chesterton wondered: what is knowledge but the slow and gradual cure for our blindness? In my own country, the United States, women have not yet been voting for as many years as they were first denied the right, and segregation of African Americans ended only fifty-two years ago. Globally there are endless examples of our innate tendency to assume that everything that is not 'us' is a lower form of life, even other people. So perhaps it is no wonder that we are so fundamentally stunted in our empathy of non-human beings.

Often we use intelligence as emotional currency towards wild animals. When we learn that a captive born tiger cannot survive in the wild without hunting lessons from its mother, it makes animals seem more like us. I was shocked one day in the Amazon when a frantic dove landed practically on my shoulder, and remained by my side as a frustrated ornate hawk-eagle glared at us both. The dove used me to gain sanctuary from the raptor.

It is easy to relate to these examples of higher order intelligence, but the truth is that everything from bats to beetles, crocodiles to cockatoos, all have their own reasons for existing, and all share the same goal: to live. Yes, most contribute to the living biosphere that has given us oxygen, clean water, food, and even fossil fuels; but living creatures can not only be defined by their usefulness to us. Most species have been surviving for millennia before we got here, and many will continue to do so long after we are gone. Imagine yourself as any one of these species. For them, our arrogance and apathy could cost them their life - and at this critical moment in history could mean the end of days for their entire species. For many, it already has.

If we were truly awake we would realize that our lives impact wildlife. At this crucial moment in history when entire species are at risk of being lost forever, the reality is that your voice, your actions, your choices matter. That even the decisions you make in the grocery store could ultimately impact rainforests and ocean ecosystems thousands of miles away.

As someone who works in those places, and who has had the privilege to become intimately familiar with many of the incredible creatures that are struggling so hard to survive in our human-dominated world, I ask you to consider a different perspective. On this World Wildlife Day, let's zoom out for a moment and remember it is not all about us. From the birds in your backyard, to the mother elephant and her family that stopped me on the road, I can tell you that if wild animals could write, if they could speak for themselves, they would remind you that their fate is in your hands.

Please click on some of the links in this article to learn about endangered species and what you can do to help. Follow Paul Rosolie on social media @PaulRosolie for dispatches from the field, and updates on how you can help.