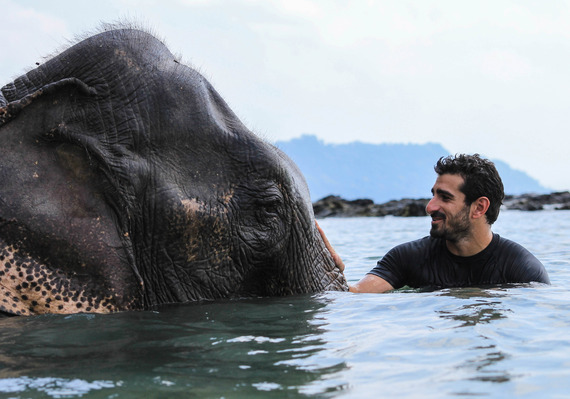 Without plants and animals, our lives would not be possible. Oxygen, clean water and soil, and our earliest tools, food, and clothing came from flora and fauna. Even our fossil fuels are the result of Paleozoic Era ecosystems that captured the sun's energy-the same energy that we are now using billions of years later. Yet increasingly, we fail to acknowledge the tens of thousands of creatures with whom we cohabitate, the wildlife upon whom our very existence is contingent.

Throughout our development, our oceans and rivers have provided us with fish; grasslands and forests have provided us with bushmeat; plants that we cultivated became staple fruits and vegetables; ecosystems ensured reliable weather and clean water. We domesticated some wild animals to become our livestock, providing milk, meat, and clothing. Wild canines developed over the years to become dogs, our hunting partners and bodyguards, our most effective alarm system in the night. Throughout those early ages, just like today, our world's fruiting trees and forests were pollinated by bats and birds, squirrels and bees. And from these forests we built houses for shelter, fires to keep us warm, ships that would take us across oceans, books that carried our hard-earned knowledge.

As science progresses we continue to draw inspiration from our wild relatives -- a bird's wing, a spider's web, the complex architecture of ants. Through biomimicry, the innovations of wildlife have allowed us to develop technology that improves our lives, and to create medicines that save millions of people annually. We derive blood pressure medication from viper venom and borrow insulin from the pancreases of pigs. Each year we borrow 500,000 horseshoe crabs from the wild to harvest their blood (they are later released back into the wild); the baby-blue blood can detect and immobilize bacterial contamination even at concentrations as low as one part per trillion. (If you've ever had an injection in the U.S., you were protected because of the blood of these prehistoric-looking sea creatures).

On this World Wildlife Day, we should take time to remember what most cultures and generations have failed to realize: that the appreciation of wildlife goes beyond merely what they have given us. Wild animals have their own inherent value, their own reasons for existing. There are many species capable of making tools, sharing innovations, and having complex thoughts and emotions. They, like us, have families, endure struggles, feel pain, experience joy, and even play with one another. If you need proof of animal intelligence and interspecies compassion, see this incredible encounter between man and wild dolphin.

Yet in spite of all that wild animals have given us, and in spite of how beautiful, complex, and awe-inspiring they may be, they are increasingly at risk of vanishing. Humans dominate 70 percent of the landmass on our planet not covered by ice. In this Anthropocene era, the age of humans as the dominant force on our planet, our population numbers are soaring above 7 billion. Because of us, it is estimated that there is 50 percent less wildlife on earth today than there was as recently as 1970. We are killing our wildlife and ecosystems in an unprecedented extermination that is now commonly referred to as "the sixth extinction." And so we come to perhaps the most pressing question of our time as a global society: what will become of us, and all of life on earth, if our wildlife becomes extinct?

We are over-fishing our oceans, depleting our forests, and hunting many species into annihilation. The Amazon rainforest alone produces about 20 percent of our planet's oxygen, and yet it is constantly under siege from soy and beef farming, hunting, mining, and the building of dams and roads. Many other rainforests are in even more dire stages of destruction from a complex matrix of human-market demands. In Africa and Asia some of our largest and most awe-inspiring creatures -- tigers, rhinos, elephants -- are on the brink of extinction along with lesser-known species, some of which have already disappeared entirely. In 2014 poachers killed as many as 35,000 elephants so that they could sell their tusks for trinkets. Demand for shark fins for luxury dining costs the lives of roughly 100 million sharks each year. The Sumatran forests -- the only place on earth where rhinos, tigers, elephants, and orangutans all co-exist -- is being destroyed at a rapid pace. The trade in endangered species has become a billion-dollar global market, ranking with guns and drugs as among the most insidious black markets. (Find out more about this on Twitter: #seriousaboutwildlifecrime.) Many species that are not deliberately hunted and traded are vanishing because of habitat destruction and development.

The problem is so vast and urgent that many consider the loss of biodiversity to be the defining issue of our time. We are the generation at the crux, saddled with the responsibility to decide whether the creatures we share this world with will continue to survive or not. It is a question that will ultimately determine the course of our own story as a species. What would we do without fish in our oceans? Without forests? Without clean water and air?

Despite the dizzying number of species headed toward extinction, however, there is still hope. The past has shown us that protecting wildlife is possible. Just decades ago the whaling industry brought the global number of humpback whales down by 90 percent, putting the species on the brink of extinction. Today, because of continued conservation efforts, they are bouncing back and nearing pre-whaling numbers. Similarly, the bald eagle -- national bird of the United States -- came dangerously close to extinction a few decades back, but is now recovering. Against all odds, the gorillas of Virunga National Park continue to thrive, because people are committed to saving them.

The list could go on at great length, but the simple fact is that many of the species on earth today wouldn't be here if scientists, students, rangers, naturalists, artists, politicians, and so many other dedicated people hadn't worked, petitioned, and taken action to protect them. After working on the front lines of this global crisis for over a decade, I'm continually humbled by the stories of human compassion and dedication that have made these victories possible.

As I sit writing these words in my notebook, on a forested hillside in south India, there is a herd of elephants across the valley. Langur monkeys are calling from the trees and nearby chital deer are grazing in the afternoon. Somewhere in the forest nearby, a tigress and three cubs are lying in the lantana bushes. These animals exist here because they are protected; forest guards work day and night to guard them from poachers. From this small, shady hillside, I find it comforting to think that somewhere out there howler monkeys are roaring a greeting to the Amazonian morning, that elephants are lumbering across Africa, that a family of humpback whales is breaching in the waves. It is deeply reassuring to know that ecosystems are providing for us, living and breathing just as they always have during our entire history. But it will only continue to be so if we can change the way we treat our wildlife. We owe so much to them. It's only fair that we allow them their own space and freedom, so that they may continue to thrive.

In celebration of World Wildlife Day, let us remember that wild animals have made us who we are. They are essential to our foundation, to our very existence. Wild animals keep our world alive. Without them, there is no us.