As a proud born-and-bred Parisian, as an enthusiastic traveller, as someone who's been living abroad, I must confess that each time I go back home I'm shocked by some archaic features of the City of Lights. Indeed, in several ways, Paris seems to be lagging behind fellow world capitals. If there's most certainly room for improvement in the French capital, generally speaking cities all around the world would benefit from implementing each other's best and new ideas. Unfortunately there's no miracle recipe to make a city safer, solve homelessness, reduce inequalities, increase diversity; there's no magical trick to come up with the ideal city... But there are some ingredients that could enhance a city's attractiveness, dynamism and quality of life.

Without any urban expertise, but simply a globetrotter's eye, here are a few gleaned around the world (please feel free to add up to this non-comprehensive list):

A city's public transport network is of paramount importance. It tells about how the city interacts and connects with the surrounding environment and the world at large. Think about it: it can be inclusive, affordable, safe, welcoming, tourist-friendly... or not. Usually, a growing, expanding, improving public transport network goes hand-in-hand with the city's growth, expansion and improvements. Hence, the development of new metro lines and the increase in frequency of stops in dodgy areas are common ways to try and change their reputation. Because social exclusion and the insecurity that feeds on it are also about spatial exclusion. A similar reasoning can be drawn for how and when we move around: many of us might have turned down offers of night-outs simply at the prospect of having to come home with the last/first metro/bus and all the drunkenness and aggressiveness it might involve. From a more general perspective, round-the-clock, cheap and safe means of transport would allow people more flexibility with both their work & personal life. Such public transport would also help mitigate the anguish and impression of sluggishness that might emanate from empty-(scary-)streets.

Moving around a city by bicycle is not only the most ecological way to do so, but also a very enjoyable one! All at once it tackles the problems of pollution, overcrowded or sometimes nonexistent (i.e. at night) public transports, and incidentally it can address a national health concern: many people's lack of exercising.

The success of self-service public bikes is unquestioned and keeps unfolding, as can be seen with the Vélib' in Paris, "Boris" bikes in London, Citi bikes in New York and more recently an homonym bike-rental system in the Russian capital. 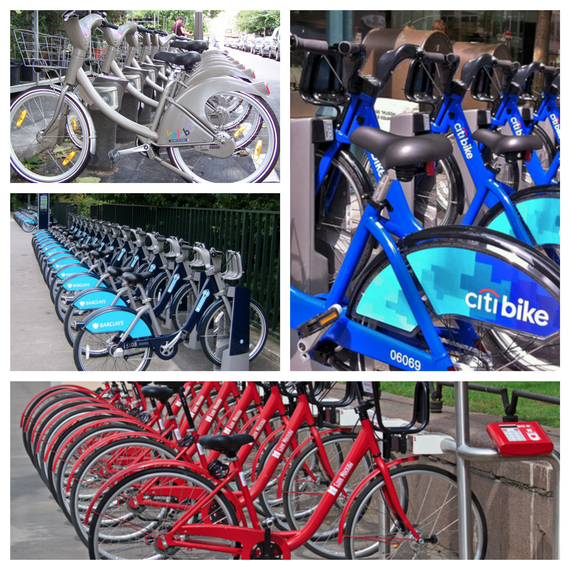 City-lovers should be thrilled by an environmentally-friendly public car-rental service, even if it's less consensual than bicycles and harder to implement for obvious reasons (i.e. security; take up scarce parking space). The Autolib' scheme in Paris has been highly praised and is solving many issues Parisians are facing up to now, including but not limited to: cost of having a car in Paris, search for parking spots, obstacle to make use of a recently obtained driving license... Furthermore, a critical mass of electrical cars readily accessible in circulation would lower the demand for classic ones, hence potentially reducing air and noise pollution all at once.

A world-class city has to be... accessible to the world! Hence it must attract foreigners, migrants as well as tourists. Let's focus on the latter category: when one is in the shoes of a tourist, one can be viewed as a "consumer" rather than a traditional "user" of the city: if a tourist is not happy, if your city doesn't meet the tourist's expectations, then the tourist will spend less in your city and might even go somewhere else. The game is as simple. By no means should tourism be the primary focus of a global city, because focusing on tourism might deplete perennial (i.e. less volatile) sectors' resources. Nevertheless, one shall not forget that tourists are, inter alia, a channel for might and influence. Therefore, one should not neglect them (unless knowingly...) and one should be concerned about the first impressions they get. Indeed, we all know how much first impressions matter. And tourists' first impressions of a city are often made on their way to the city centre from the airport. This is why (at least one) express, cheap, picture-perfect means of transport connecting airports to the city centre are not much of a detail in terms of urban planning. Drawing on personal experiences, I must say that Paris's unreliable and luggage-unfriendly RER trains, which often serve tough suburbs before it gets downtown, cannot compete with Moscow's fast, direct and punctual Aeroexpress trains!

Even if it's taken to the extreme, it is to say that cities aspiring to being on the forefront of the world stage must pay attention to how they handle people's arrivals.

New York City and Moscow share much more than one thinks, most notably round-the-clock shops and restaurants. 24/7 shops are not only about city dwellers' comfort. While they certainly are a privilege, they shouldn't be considered a luxury. Not only do they make early birds and night owls equal (finally!), but most importantly they can boost the economy by creating jobs and to some extent they can help make a city safer. Anyone who has walked home well into the night might have done so with a heart rate unusually high, for no other reason than the (ir)rational feeling of insecurity lingering in the dark. However, that feeling will most certainly have disappeared when walking by that one little grocery shop still open and its friendly lights. On a lighter note, one will appreciate to be able to order more than a sandwich in a bistro after 2pm or to find that kitchens aren't closed after 9:30pm (#lifeinParis), just as one would appreciate not to be politely asked to leave their favourite pub at 11pm (#lifeinLondon). Last but not least, the sacralisation of Sunday rest in France for instance (with interdiction to work and penalisation of those who do not respect it), seems outdated and ill-adapted to a modern secular country. Of course there are risks of abuse that must be addressed very seriously, through strict regulation and supervision. However those risks shouldn't eclipse the benefits nor prevent us from at least trying.

Along with 24/7 public transport, you're on the right tracks to get a city that never sleeps! And who wants to sleep (because there's nothing else to do...) when 24 hours a day sometimes just don't feel like enough??

6) an exciting (and affordable) nightlife

A city that wants to be #1, must be #1 in our hearts day and night. It must be cool in every sense of the term: it must be a place where everyone can have great fun... and not only people in their 20's or 30's. However it must be a place where people who are actually in their 20's can easily afford to go out, where the average entry price to a club is less than 15€ (#lifeinParis)! A top-notch city must bring people together, make them feel equally at ease and enable them to unwind when they want to. An exciting nightlife basically means more life to a city, all the more that it often comes with new places of urban self-expression, reveals promising talents and fuels soft power. 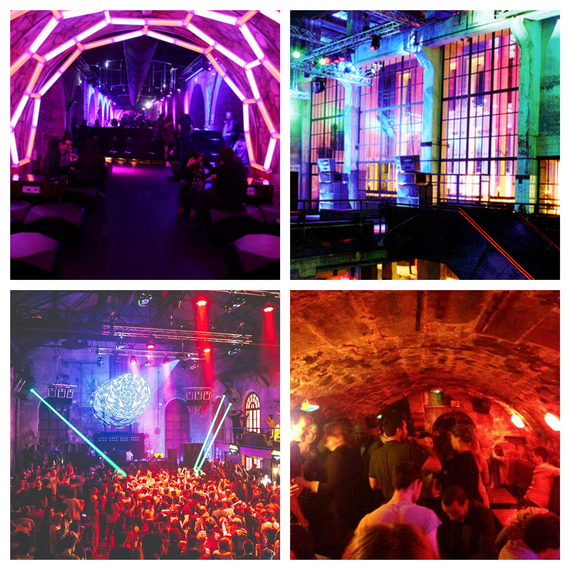 At a time of smartphones and teleworking, when many of us communicate solely through emails, facebook, whatsapp, skype, imessage, etc., we've become very much internet-dependent. It's a fact, not a value-judgement. While at home we can rely on 3/4G, abroad the Holy Grail comes at a huge cost that not everyone can afford. This explains the bizarre transformation that then might operate inside you, when you compulsively start looking for a "free wi-fi" network any time you enter a public area!

Making the Internet readily available across a city can be easily achieved, at least technologically, and could make a difference in people's everyday life. (And I don't mean only for Millennials who ab-so-lu-te-ly need to send a "snap"...!)

For a cleaner, healthier and more attractive city, recycling must be made a priority. San Francisco and its "Zero Waste" mission (soon to be achieved) is the most advanced and exemplary in terms of recycling. The San Franciscan experience, which most recently inspired New York, also demonstrates that innovative recycling techniques have created many job opportunities. Turning city dwellers into recyclers and well-educated consumers is key to develop fairer and more sustainable lifestyles, a going concern for forward-looking authorities. Recycling is not just fashionable or a hipster thing to do: recycling is vital, and will become more and more so. Indeed, if trying to curb overconsumption and waste is necessary, it must be coupled with re- and upcycling, especially as "zero growth" is not an (en)viable option.
Therefore, it seems completely ludicrous that in a city like Paris waste sorting is in force in some "arrondissements" but not in others that are traditionally regarded as more "chic" (i.e. 6ème, 16ème)...

We shall all remember the great Lavoisier and his well-known maxim "nothing is lost, nothing is created, everything is transformed"... and try to transform everything in the best possible way!

To be avant-garde and influential, a city must be adaptable and responsible. Indeed, sustainability is a growing concern of societies worldwide. And in face of ever-increasing rural exodus and urbanisation, at a time where cities are viewed as the paragon of Civilisation, solutions must be found to make "city" rhyme with "sustainability." And reducing our carbon footprint is a big step towards it. With more and more inhabitants populating cities globally there's a need for more and more food to be produced locally.

In rooftops we trust. 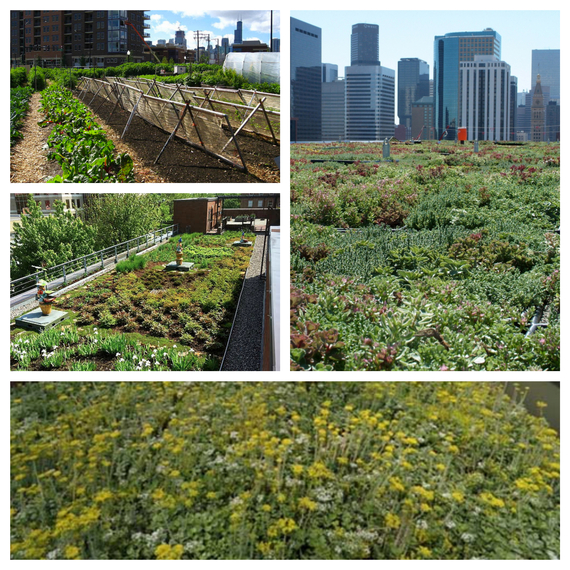 As a follow-up to the rooftop theme, let's reflect upon algae. When one thinks algae, at best it can raise the image of a nice sunny beach or of a cool Japanese restaurant, at worst it brings up the idea of weird beverages part of a fashionable diet. However, we are very little aware of the amazing things that phytoplankton (a.k.a. micro-algae) can achieve. Apparently incorporating phytoplankton to the ecosystem of buildings, more specifically incorporating phytoplankton in tubes collecting wastewater and going through walls and on the roof would all at once enable to: insulate buildings, produce oxygen (i.e. photosynthesis) and clean water. In the past few years, the French startup Ennesys, has developed a pioneer technology to depollute wastewater and at the same time produce energy: the results of the reaction between phytoplankton and waste in wastewater, are clean water on the one side and biomass aggregate on the other that can be used as a new type fuel (i.e. substitute to coal).

If algae have long been praised for their nutritious benefits and the great difference they can make to fight malnutrition (cf spirulina); algae could also be the key ingredients in the resolution of serious environmental challenges and threats that cities are facing.

Most of the time a student. Passionate globetrotter and sculptor. Founder of Règles Élémentaires: the first French charity to collect sanitary products for homeless women.