On Wednesday in Davos, Switzerland, Arianna Huffington and Nicolas Berggruen invited some of the world’s most prominent academics, journalists and businesspeople to celebrate the launch of their new collaboration, The WorldPost, which went live hours earlier.

As their hosts described the new project, about 60 guests dined on pumpkin soup and halibut at The Huffington Post-Microsoft Cafe in the Microsoft Vision Center across the street from the Congress Centre of the World Economic Forum. Berggruen, whose think-tank, the Berggruen Institute on Governance, partnered with The Huffington Post to launch The WorldPost, explained that the new publication is obsessed with bringing fresh voices to bear on the pursuit of human progress. He said the site will feature contributions from some of the planet's most daring thinkers on subjects from the impact of a rising China on global stability, to the shape of future technological innovation.

Huffington added that the new publication will bring The Huffington Post's focus on healthy living and mindfulness to a new global audience. Its coverage will spotlight corporate practices that enable employees to reduce workplace stress while advancing greater understanding of human physiology. Hosain Rahman, cofounder and CEO of Jawbone, also spoke about the importance of using technology to help encourage healthy living in a global age.

Editors who will oversee the day-to-day operations of The WorldPost spoke as well. Nathan Gardels, the publication's editor-in-chief, described the publication as an antidote to stale thinking, and a source of new ideas on crucial global issues.

"The WorldPost was born from a contradiction and a paradox," Gardels explained. "The contradiction is that, just as we have become more globally interdependent than ever, our media is re-nationalizing, re-localizing and even tribalizing. There are ever fewer voices heard across boundaries. This leads to the paradox that we risk the information age becoming the age of non-communication."

"The WorldPost is meant to address this by connecting the world and connecting the dots," he continued. "Creating a platform where the whole world can meet -- a platform that does not have a national perspective looking out, but a global one looking around."

Peter S. Goodman, executive editor of The WorldPost and a veteran of The Huffington Post and The New York Times, portrayed the new site as a natural outgrowth of HuffPost's global ambitions, one that seeks to cover issues from an international perspective as opposed to one dominated by American concerns.

"Our new team of international correspondents -- combined with top-notch writers at HuffPost international editions in 10 countries -- gives The WorldPost considerable perspective on global issues," he said later. "We aim to elevate the conversation about global challenges while putting the spotlight on promising innovations. We are particularly keen to broaden the lens on China."

The WorldPost already has deployed correspondents to Beirut and Cairo, and plans to dispatch a correspondent to Beijing. The site also will feature stories on the People's Republic from ChinaFile, a trove of news and analysis on the world's most populous country produced by the Asia Society.

The guests at the luncheon browsed the new site from their tables using Microsoft Surface tablets, reading stories on riots in Kiev, murderous iPhone thefts and the work of Nobel Peace Prize laureate Muhammad Yunus, along with commentary by Bill Gates, economist Michael Spence and foreign policy expert Anne-Marie Slaughter.

They saw something a lot like the conference they were in Davos to attend: a neutral space for the world's greatest minds to discuss the most pressing issues of the day; a lively forum for debate and conversation among friends, enemies, acquaintances and strangers; and a respite for busy global leaders and the readers looking for a way to better understand their world.

Click through below for photos from the launch event in the Microsoft Vision Center: 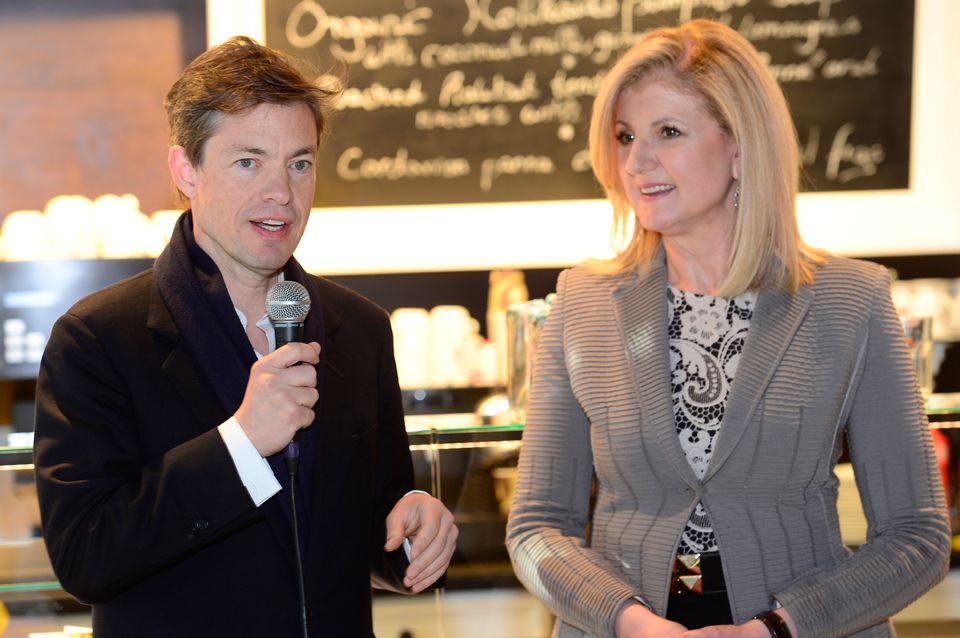